“A people that wants to remain ignorant and free … wants what never has been and never will be” ~ Thomas Jefferson.”

How do those in power finance staying in power?  The Ventura County Republican Central Committee is a great example.  Led by Mike Osborn they did a Texas two step.  At the last committee meeting his slate of candidates endorsed themselves for election/re-election.  Should a Committee be allowed to endorse themselves?  Conflict of Interest?  Abuse of power?

Not enough.  At a previous meeting a member BEGGED those present to give a donation (one person present, running for Central Committee was so moved that he donated $500 on the spot—not knowing his money was going to be used to defeat him!)—that night—“we have to be prepared for the November election” those present were told.  Lots of money was collected.  How was it spent?  Osborn then used the money raised—from that night and membership dues to send mailers to Republican voters—paid for by “Membership Communication.” Instead of using the money to register voters, help our candidates, County Committee “endorsed” candidates got a mailer.

How do we KNOW this was a Mike Osborn mailer?  The mailer and the flyer had Mike’s picture on it telling voters these were the people to vote for.

Now you know why people have little respect or trust for GOP leadership (Mike is on the CRP Board).  Is it the role of a Central Committee to use its name and money, not to elect Republicans or defeat Democrats, but to continue its ownership of the Party?

LEGAL?  Yes.  Ethical, Moral—you decide.  Should the candidates using donated money give the money back?  Absolutely. 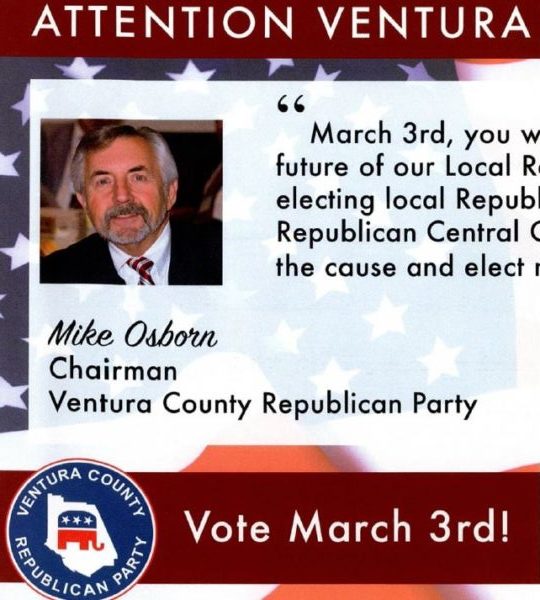 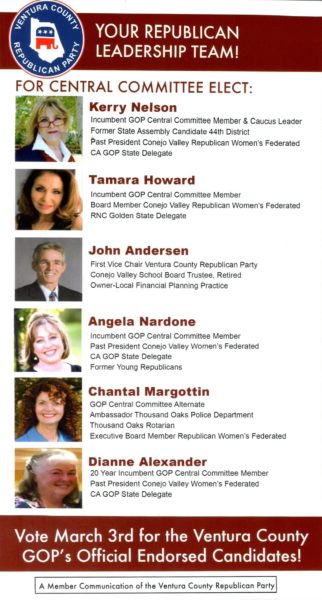 PARTY POWER: Both parties yesterday reported spending in the targeted races. Watching this spending gives you an idea (as if it wasn’t clear) where the games are being played. While most will be general election fights, propping up candidates in March is key strategically. (*=incumbent)

Stephen Frank: Is the the publisher and editor of the California Political News and Views.  Mr. Frank speaks all over California and appears as a guest on several radio shows each week. He has also served as a guest host on radio talk shows and is a full time political consultant. http://capoliticalnews.com/

A response to Stephen Frank and the Citizens Journal

Thank God and all the folks who devote their time and energy to the Citzen’s Journal! Human nature does not change; power tends to draw greedy and corrupt people like bugs to a porch light on a dark summer summer night. They will don a silk suit and spew whatever silver tongue rhetoric they think will give them access. It tends to corrode even honest people. I tell my high school students they can open up their US History text to any page, read the opinion pages from any NY Times, and read just about any Shakespeare play and see the same eternal patterns playing out “again and again and again” as FDR would say. The clothes, languages, and technologies change but humans don’t. That’s the profound realization the Founders had; it was a driving force behind the heavy, now largely broken, shackles they placed on the fedgov via the Constitution. The various political and economic factions will never fade in this temporary, fallen world, and are in fact are often natural and healthy; the trick, as Madison put it, is to pit “faction against faction” to balance each other. Kudos to you folks for doing that on the local level!

Other than maybe Kerry Nelson, I would like to see new members elected. I know Kerry Nelson and Debra Tash, who I have great admiration for.

After those two choices, I would elect anyone else who is NOT an incumbent.

One way to start fixing this is to not vote for anyone who is an incumbent on this Central Committee. Check out the voter guide and vote for those running in your district that are not incumbents.

Why is VC Republican Central Committee using collected money endorsing itself and harming the chances of other loyal Republicans running for office? This is outrageous and needs immediate correction before IRREPARABLE HARM occurs.

The CC has presided over a loss of a Republican majority and 30,000 voter gap, failure in voter registration, failure in publicizing events, failure to take stands on issues and educate the public in them, failure to support campaigns and more.