On September 26, 2021, I posted the Spartacus letter in its entirety, because I thought it was too good to “disappear” in our daily news aggregator, Debt Rattle. This turned out to be a good decision, since the letter vanished from its original server soon afterward. But it was -and is- still here. Zero Hedge reposted my repost, and things went off from there, generating some 200,000 views here and 1.85 million at Zero Hedge. Plus who knows how many at other places.

The Spartacus collective -we now know they are indeed a group- returned a few days ago with an update letter, now on Substack. That is probably a safer place then their original Docdroid site, but I’ll repost this one as well. Nice to see they are aware of the Automatic Earth’s role in garnering attention for the first letter. My pleasure. You guys are very good.

Note: the original, COVID-19: A Web of Corruption, is here.

My name is Spartacus, and Ive had enough.

I am one of the authors of the Spartacus Letter, a document that took the world by storm in September of 2021.

To date, four versions of the letter have been published, and all four can be viewed here:

We shared this document with numerous news outlets and sent it directly to Dr. Robert Malone, who linked it on his Twitter account. From there, it was reposted on the Automatic Earth blog, and then, on ZeroHedge, where it garnered over a million hits.

It was quickly decried as misinformation both by freelance analysts on Twitter, and by fact-checkers: 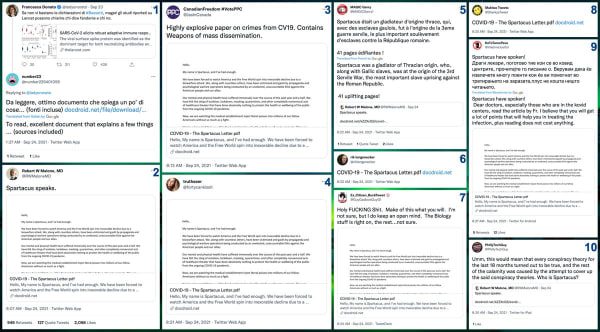 If you perform a Google search for the Spartacus Letter, Google s algorithm prioritizes one result above all others: a fact-check by Newswise debunking it, which, unsurprisingly, 77% of visitors to the page disagree with.

Is this the case? Could ICENI, with a fully-sourced document with over 600 citations that lays out an extensive argument regarding the nature and origins of COVID-19, have been intending to deliberately mislead the public, as our detractors state?

Perhaps we were not explicit enough.

SARS-CoV-2 is manmade. It was produced at the Wuhan Institute of Virology with US Government funding. It is the lynchpin of a plan by ruthless elites to take over the entire world. There is enough circumstantial evidence that, if taken together, implicates numerous government officials and scientists in this plot.