The Ventura County Taxpayers Association hosted Rob Gutierrez from CalTax on Thursday October 3, 2019 to review the proposed Split Roll Proposal which has qualified for the 2020 ballot. 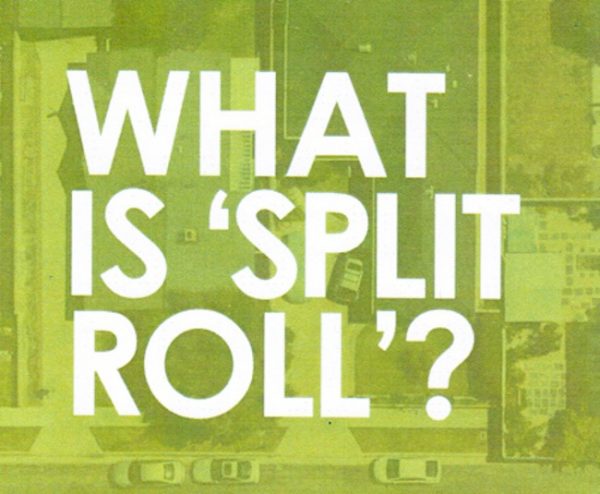 Note that there have been two versions of this proposition. Here is a link to the proposition and a comparison of the two versions: Ballot Measure Details

Each submission cost the circulator millions of dollars, according to Mr. Gutierrez. This coalition consists of groups like the CTA, SEIU and wealthy individuals such as Chan Zuckerberg.

What’s in a Name?

With a proposition name like this, it is clear who the constituencies are:

Will this name draw out voters who read only the name on the summary? The audience was unsure, nor is there polling.

Proposition 13 brought stability to taxpayers and a predictable source of revenue to cities. With the Split Roll proposal, the predictability will disappear.

The current Split Roll proposal targets individual properties or owners with a combined commercial portfolio value of $3 million or greater. Housing and agriculture are excluded, but not vacant land.

Now how does the Assessor make the new assessment? There are two standard methods for commercial property: income potential and comparable sales. Businesses whose properties span multiple counties must coordinate the assessment across counties including protests. A protest triggers a manual assessment for which hundreds of new employees will be required in county assessor offices across the state. A protest will pause the distribution of the property taxes for the properties in question until resolution, which means cities will not see the revenue until resolution of the protest.

A computer can make the first cut, but when the bills are created, the protests will begin.

Financially secure chain stores who own their property will be able to pass on the costs to consumers and survive, but what about struggling retail malls? A single user retail tenant typically pays a Triple Net Lease (N-N-N) which means the taxes are paid by the tenant. In a mall, the mall owner passes on these costs based on square footage. One need only walk through Pacific View Mall in Ventura and see the vacancies.

The self-storage industry is very concerned about the effect on its business. Read that industry report here: Self-Storage Disastrous Tax

Another California industry which could see hikes in prices and closures is the retail gasoline industry. A quick review of these stations for sale show that many will fall into the $3,000,000 cutoff for the split roll: Loopnet Gas Stations for Sale

The LAO (Legislative Analyst Office) collected estimates from assessors about staffing implications of the Split Roll. This information is shown as potential administrative costs on the ballot summary.

Larry Stone of Santa Clara said it is “impossible to implement” as written. Read that statement here: Larry Stone Statement

Mr. Gutierrez displayed a chart showing the property tax burden in 1979-80 versus 2015-2016. The shift was as follows, data for which was obtained from the BOE and the LAO:

The notion that there has been a huge shift is clearly not true.

Mr. Gutierrez reported that a week of television advertisement In California costs $8 million. Look at the supporters of the Split Roll and understand the funding impetus.

The Elephant in the Room: Demographics

It should not be a secret that California school districts are experiencing flat to declining enrollment. There are many reasons including out migration from the state, slowing birthrates, aging population and home schooling.

Districts have successfully passed parcel taxes in recent years as an antidote to these demographic trends. Since 2010, six of seven years showed more parcel taxes passing than failing, according to a Proposition 13 phamplet.

While Sacramento is smiling over its current “surplus”, others see the state in a fiscal failure. See details here on page 112: Truth in Accounting

California’s debt burden is $275 billion which equates to $21,800 per taxpayer. So why would Californians want to increase the burden on the taxpayer and potentially maim or drive away business from the state?

The Split Roll has been proposed before but conditions have “improved” for a huge turnout in 2020. This initiative could be highly affected by turnout. Mr. Gutierrez indicated various polls with support increasing with turnout. Follow the PPIC polling here: PPIC Polling

This article sets the stage for a historic battle in November 2020 but not at the national level. It is Proposition 13 that will be at stake. Candidates including Elizabeth Warren have endorsed the Split Roll.

As always, all eyes are on California: Epic Battle

Keep in mind that this is both business and employment destructive. Businesses will leave California to more business friendly States and the employee’s of those business, if lucky, will follow the Businesses. Those left here will be looking for work where it doesn’t exist, and if not lucky for them or tax payers, will become the future of a welfare State.

…How would revenue from the change in taxation be distributed?

The ballot initiative would create a process in the state constitution for distributing revenue from the revised tax on commercial and industrial properties. The ballot initiative would distribute the revenue to specific areas, rather than the General Fund. First, the revenue would be distributed to (a) the state to supplement decreases in revenue from the state’s personal income tax and corporation tax due to increased tax deductions and (b) counties to cover the costs of implementing the measure. The Legislative Analyst’s Office estimated these costs to be about $500 million of the $6.5 to $10.5 billion in additional revenue that the revised tax would generate. Second, 60 percent of the remaining $6.0 billion to $10.0 billion would be distributed to local governments and special districts, and 40 percent would be distributed to school districts and community colleges (via a new Local School and Community College Property Tax Fund)…..Ballotpedia…