The U.S. Department of State for a week failed to respond to a Republican congressman’s request to help American citizens and others trying to evacuate Afghanistan, according to emails obtained by the Daily Caller News Foundation.

California Republican Rep. Darrell Issa told the DCNF that the State Department took a backseat approach to evacuations from Afghanistan.

“The State Department should have been in the lead rescuing Americans from the Afghanistan crisis it helped to create,” Issa said. “Instead, like the President, it has been a bystander, except for its unambiguous message to stranded citizens that they are on their own.”

Issa’s office initially reached out to the State Department Aug. 30 to request “an immediate meeting with State Department officials to receive a briefing on the steps being taken to return our citizens home to safety and answer questions as to the methods being employed.”

On Aug. 31, a State Department official connected Issa’s office with officials who “could assist on setting up a meeting.” One official asked for the information of those seeking evacuation, which included Legal Permanent Residents (LPRs), through Issa’s office and Issa’s team responded with their information. 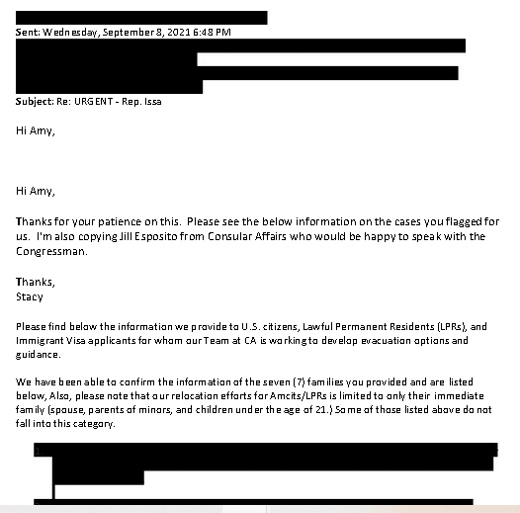 “As we wait for a time to be proposed for your team to brief Rep. Issa, below are the remaining AMCITS/LPRs that we are tracking who are San Diego region,” Rep. Issa’s team wrote in a subsequent email with information about the evacuees. “Additionally, I included a request from Rep. Sara Jacobs for assistance to her LPRs that have reportedly not received attention.”

The State Department responded to Issa’s team, saying that “The Department is planning another briefing for House Members for tomorrow and would welcome the Congressman’s questions there.”

Issa’s team responded: “Regardless of the briefing we are requesting a personal meeting with State Officials to answer direct questions about our specific cases.”

The email continued, “The whole of Congress does not need to hear every single detail of our cases. But you do. Please advise on a date and time to connect within 24 hours.”

The renewed request for a personal meeting received no response until Issa’s staff reached out Sept. 8 saying, “Repeated requests from Rep. Issa for a call with your Department to discuss our specific American Citizens and LPRs cases continues to go unscheduled.”

That guidance included that American citizens and their families still in Afghanistan should “Make contingency plans to leave when it is safe to do so that do not rely on U.S. government assistance.”

The official also added Jill Esposito, who handles Consular Affairs, to the email chain to speak with the Congressman. Issa’s office said the congressman hasn’t met with Esposito because they spent the next two days evacuating two 80-year-old American citizens from Kabul.

The State Department didn’t respond to the DCNF’s request for comment.