Sunday Rally @SF City Hall: What Has Fentanyl stolen from you?

What has fentanyl & the Open Drug Market stolen from you?

San Francisco, CA — Parents, families, students, and citizens from across California will rally this Sunday at City Hall to raise awareness for National Fentanyl Prevention and Awareness Day.  Speakers at the rally will feature first responders, parents and loved ones of those lost to overdose and those still struggling, and recovery advocates.  San Francisco District Attorney Brooke Jenkins and Supervisors Matt Dorsey and Ahsha Safai will join them for the event.

More than 2100 people have died from fatal overdoses of fentanyl in San Francisco since 2019.  Deadly drug dealers have taken over neighborhoods.  Violence, property theft, and vandalism are now regular occurrences.

While the death rate from drug overdoses and poisonings has risen nationwide, in San Francisco, the number is staggering, with 641 deaths in 2021, 74 percent involving fentanyl.  That’s a rate of 63 deaths per 100,000, nearly three times the rate of drug deaths in Los Angeles and twice the rate in New York City. 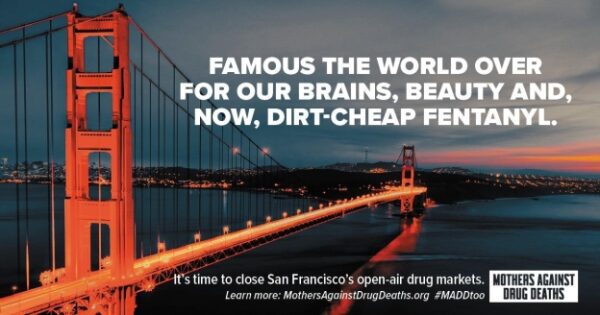 The rally-goers are uniting to address the question, “what has fentanyl and the open drug market stolen from you?” And to rally for more prevention and treatment in San Francisco.

On the steps of City Hall, parents and family members plan to create a memorial to honor more than 300 lives lost this year to overdoses in San Francisco alone.

The rally is organized by Mothers Against Drug Deaths, the non-profit group of mothers whose children have been lost to fentanyl or are at serious risk and still on the streets.  Earlier this year, the organization sponsored two hard-hitting billboard advertisements to pressure Governor Newsom and Mayor London Bread to end the epidemic.  Their dogged tenacity to pressure lawmakers to end the epidemic has garnered national accolades and media coverage.

WHO: First responders, parents and loved ones of those lost to overdose and those still struggling, and recovery advocates.  San Francisco District Attorney, Brooke Jenkins and Supervisors Matt Dorsey and Ahsha Safai will join the event.

WHAT: Rally and press conference.  There will also be a memorial of the more than 300 lives lost this year to overdose in San Francisco.

WHY: To raise awareness about what fentanyl and San Francisco’s open drug market have taken and call on lawmakers to end the crisis.

About Mothers Against Drug Deaths

We are mothers of children who have been killed by fentanyl, at immediate risk of being killed by fentanyl, and want to prevent more children from dying.  But many more of us are stepping up, as parents, and citizens of California, to demand that we shut down the drug death markets, create psychiatry for all, and adopt a “Shelter First” policy for drug-addicted homeless, so they can get the help they need.