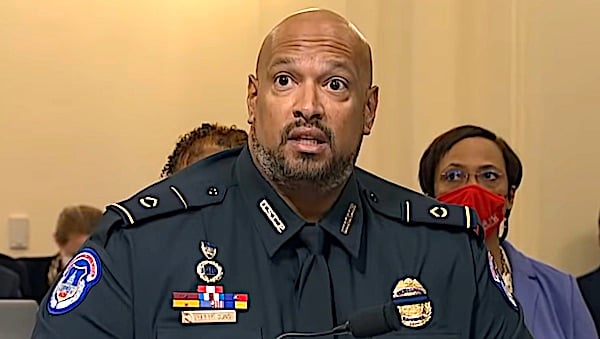 Adam Schiff, whose fame is linked to his dedication to the now-debunked narrative created by Democrats in 2016 to hurt Donald Trump by alleging that the Republican’s campaign colluded with Russia, stopped his comments to compose himself.

And Adam Kinzinger, who was one of two Republicans who have aligned themselves with Democrat agenda points on the committee whose members all were picked by Pelosi, did similar.

Some of the comments were from Capitol officer Harry Dunn, who talked about his recollection of being called a racial epithet when he engaged in conversations “with rioters,” telling them he had voted for Joe Biden.

Dunn revealed he got no warning of any threats from his chain of command that day, even though President Trump had offered additional security, an offer declined by congressional leaders.

A report in the Hill revealed Dunn’s testimony that Trump supporters had been on scene before, but never before was there “the attempt to overthrow democracy.”

But after his appearance, a reported in the Gateway Pundit explains the likely reason Dunn was asked to testify in the hearing that has been described by analysts as a Democrat attempt to perpetuate the controversy over Jan. 6 since they have so few accomplishments on which to base any 2022 campaigns.

“They do this as Jan. 6 political prisoners are abused and languish in isolation just miles from the U.S. Capitol in Washington, D.C.,” the report continued.

It cited his claim to having been called the N-word during the riot.

“Of course, this didn’t happen or we would have heard about it by now. But Officer Dunn knows he can say this because the mainstream fake news media will NEVER ask him to prove it,” the report said.

Attached were social-media statements supporting a high level of concern over his neutrality on the issue.

Cap police Officer Harry Dunn says that the n word was shouted at him multiple times while defending the Capitol on Jan 6:

“No one had ever—ever―called me a n***er while wearing the uniform of [USCP]"
https://t.co/McPXe2NC3J

Those included an image of him at a BLM rally in Washington:

Capitol Officer Harry Dunn and his daughter at a BLM protest in DC pic.twitter.com/mVDENqpb6Q

Also confirmation that it was Dunn at the race-based events:

Further, there was one revealing his endorsement of violence in Kenosha, Wisconsin, last year during violence triggered by a race dispute there:

Harry Dunn said the burning of Kenosha was an ‘appropriate response’ pic.twitter.com/b5MRPnuPK4

And one where he uses objectionable language to express his disgust for popular Fox News commentator Tucker Carlson.

I hate @TuckerCarlson what an out of touch asshole that has no clue about anything that doesn't look like him or agree with him. #getoverit pic.twitter.com/GS3wqAGjXq

There’s no video record of this guy being called the “n” word. From what I understand, the Feds still have more than 14,000 hours of videotape they’ve refused to release to the public. If there was a record of many Trump “supporters” or Jan. 6 protesters and rioters shouting the “n” word, wouldn’t they have released that already? CNN, MSNBC and PBS would run that sucker ad infinitum!

Black at it Again !

And yet Officer Dunn will not receive even a letter of reprimand. Just watch.

If you don’t have a good reason to be in Washington, D.C., do not go there.

The place has literally become enemy territory inside the country.