Taliban, Who The Biden Admin Hailed As 'Businesslike,' Hang Body From Crane, Put Other Corpses Out For Public Display As 'Lesson' 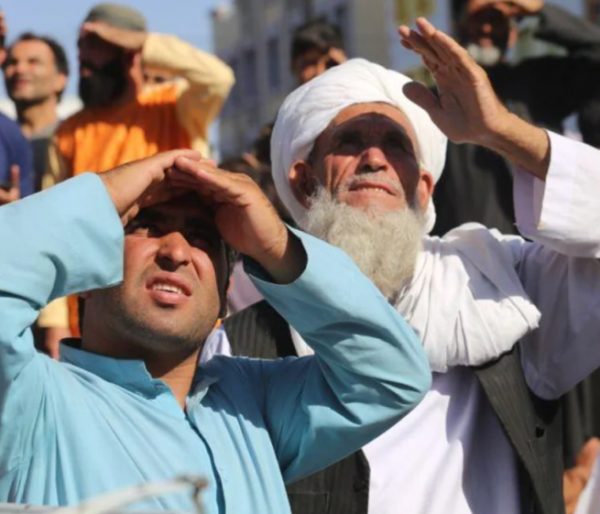 Despite recent praise from the Biden administration, the Taliban appear to have returned to ruthless tactics just one month after seizing control of Afghanistan. Four bodies were recently displayed for the public to see, putting Afghans and the world on notice that the hardline Taliban government will rule with an iron fist.
Taliban officials brought four bodies to the central square in the western city of Herat, the Associated Press reported. Three corpses were transported to other parts of the city for public display, according to local resident Wazir Ahmad Seddiqi. A crowd gathered in the city square to see a bloodied body hanged from a crane on Saturday. Reuters reported that the bloodstained corpse swinging on the crane had a note pinned to the man’s chest that read, “This is the punishment for kidnapping.”
Taliban officials claimed that the four men were caught participating in a kidnapping plot earlier on Saturday. The alleged suspects were reportedly killed during a gunfight with police. Ziaulhaq Jalali — the Taliban-appointed police chief in Herat — claimed that kidnappers abducted a father and son, who were rescued. A Taliban militant and a civilian were wounded during the shootout.
“The aim of this action is to alert all criminals that they are not safe,” a Taliban commander told the AP.
Herat province’s deputy governor Mawlawi Shir Ahmad Muhajir said the public hanging was a “lesson.”
“In order to be a lesson for other kidnappers not to kidnap or harass anyone, we hung them in the squares of the city and made this clear to everyone that anyone who steals or abducts or does any action against our people will be punished,” Muhajir said.
The Daily Wire reported that Republican Rep. Michael Waltz (Fla.) reacted to the grisly image of the hanging, “America needs to see and understand what brutal terrorist thugs we are dealing with…and that their violence will follow us home.”
Last week, one of the founders of the Taliban declared that executions and hand amputations would return in Afghanistan. Mullah Nooruddin Turabi — who was justice minister and head of the Ministry of Propagation of Virtue and Prevention of Vice during the Taliban’s previous reign — told the Associated Press, “Cutting off of hands is very necessary for security.”
“Everyone criticized us for the punishments in the stadium, but we have never said anything about their laws and their punishments,” Turabi said. “No one will tell us what our laws should be. We will follow Islam and we will make our laws on the Quran.”
State Department spokesman Ned Price responded to Turabi’s promise of executions and amputations by saying the punishments “would constitute clear gross abuses of human rights.”
“We stand firm with the international community to hold perpetrators of these, of any such abuses, accountable,” Price told reporters on Friday.
Previously, the Biden administration praised the Taliban for being “businesslike and professional.”
“The Taliban have been cooperative in facilitating the departure of American citizens and lawful permanent residents on charter flights from HKIA,” National Security Council spokeswoman Emily Horne said on Sept. 9, referring to Kabul’s international airport. “They have shown flexibility, and they have been businesslike and professional in our dealings with them in this effort. This is a positive first step.”
The same day, White House press secretary Jen Psaki confirmed that the Taliban acted “businesslike and professional.” Psaki said the Biden administration worked with the Taliban on the departure of U.S. citizens and lawful residents through a charter flight out of Kabul.
“And in order to get those people out, we had to work with some members of the Taliban to press them and to work in a businesslike manner to get them out,” Psaki said during a press conference.
On Saturday, Rep. Carlos Gimenez (R-Fla.) referred to the hanging and wrote on Twitter, “Is this who Jen Psaki called ‘businesslike and professional?'”

BREAKING: Witness says Taliban have hanged a dead body from a crane in the main square of Herat city in western Afghanistan. https://t.co/df2NiHcqcZ