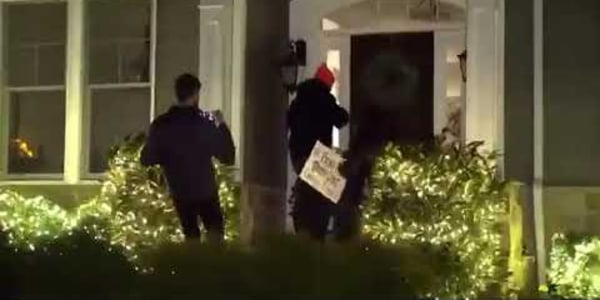 Antifa activists at the home of Sen. Josh Hawley on Jan. 4, 2021 (Video screenshot)

A public school teacher in California has boasted of his work in using the 180 days of a public school year to turn students into “revolutionaries.”
The undercover interview was obtained by Project Veritas, James O’Keefe’s journalistic organization that obtains exclusive interviews undercover, and reveals some stunning comments.
See the video (Be aware of offensive language):

The teacher is Inderkum High advanced placement instructor , , who boasts of indoctrinating students politically and giving them extra credit for working on his own personal agenda points.
He sends them to protests and “community events” for which they get class credit.
“I have 180 days to turn them [students] into revolutionaries … Scare the f— out of them,” he told Project Veritas.
“I post a calendar every week … I’ve had students show up for protests, community events, tabling, food distribution, all sorts of things … When they go, they take pictures, write up a reflection—that’s their extra credit.”
He indexes students’ politics over the year and credits himself with pushing students “further and further left.”
“So, they take an ideology quiz and I put [the results] on the wall. Every year, they get further and further left … I’m like, ‘These ideologies are considered extreme, right? Extreme times breed extreme ideologies.’ Right? There is a reason why Generation Z, these kids, are becoming further and further left,” he explained.
He pointed out his Antifa flag on his classroom wall, and noted one student had complained that it made him feel uncomfortable.
“Well, this [Antifa flag] is meant to make fascists feel uncomfortable, so if you feel uncomfortable, I don’t really know what to tell you. Maybe you shouldn’t be aligning with the values that this [Antifa flag] is antithetical to,” Gipe snarked.
And he suggested violence.
“Like, why aren’t people just taking up arms? Like why can’t we, you know — take up arms against the state? We have historical examples of that happening, and them getting crushed and being martyrs for a cause and it’s like — okay well, it’s slow going because it takes a massive amount of organization,” he said.
He boasted of lessons from Huey Newton and Fred Hampton of the Black Panther Party.
“You need to retrain the way people think. So, the Cultural Revolution in the 60s was fixing the problem that came about after the economic one,” Gipe said.
Gipe said in the report other teachers share his ideology.
“They’re rad,” he said. “They’re great people. They’re definitely on the same page.”
The Natomas Unified School District said it has gotten calls expressing concern about the teacher. Officials there said they would investigate and “take any appropriate actions.”
Its policy is that “controversial” topics are taught “in a balanced manner that does not promote any particular viewpoint.”
Project Veritas caught up with Gipe the next day to interview him regarding his comments. Watch the video below.

Why is he not fired?

School districts have pretty low standards to hire a Commie tool like Gipe. What a confused jackass with his tats and little commie shirt. Tosser.

Latoya Lester
Reply to  Michael A...

My question is, what subject is he supposed to teach? If we just teaching nonsense, I’ll teach a class on thinking for yourself. Not following the crowd, doing dumb challenges and making smart lifelong decisions

Michael A...
Reply to  Latoya Lester

CIVICS maybe? How to live, work within, and prosper in a modern democracy? Jeez

Mike Smith
Reply to  Michael A...

“…Gipe. What a confused jackass…”

But that’s just the thing: Gipe may not be confused. Gipe may simply be evil! The Maoist, ideological poison the guy spews to kids certainly is.