The leader of an influential teachers union promised Tuesday to defend those who teach what she regards as an “honest history” of the U.S.

The American Federation of Teachers (ATF) is preparing litigation and is “ready to go,” according to a copy of remarks union President Randi Weingarten delivered at a conference Tuesday.

Weingarten swore to combat “culture warriors” who attempt to censor a realistic telling of the history of the U.S., according to the statement.

“Let’s be clear: critical race theory is not taught in elementary schools or high schools. It’s a method of examination taught in law school and college that helps analyze whether systemic racism exists,” Weingarten said in the remarks.

CRT holds that America is fundamentally racist, yet its proponents teach people to view every social interaction and person in terms of race.

Over 165 local and national parent groups have organized to combat CRT being taught in schools, the Daily Caller News Foundation reported in June.

A policy that some object to in Washington, D.C. schools included “asking teachers to adjust homework assignments according to a child’s skin color,” Jonathan Butcher, a Will Skillman fellow in education at The Heritage Foundation, previously told the DCNF. 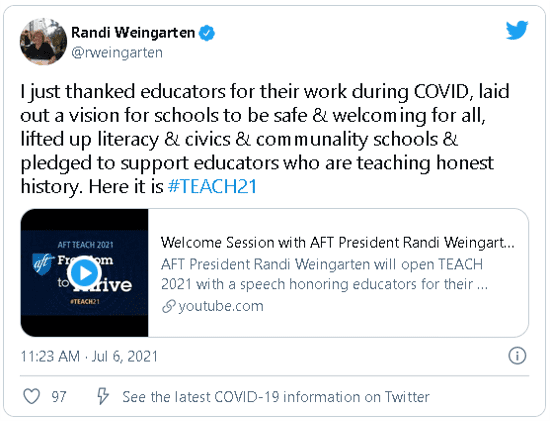 “Culture warriors are labeling any discussion of race, racism or discrimination as CRT to try to make it toxic. They are bullying teachers and trying to stop us from teaching students accurate history,” Weingarten said Tuesday.

Weingarten’s response is an attempt to combat nearly 20 states’ proposals to ban what they regard as CRT. Six states have already passed laws that limit how teachers can discuss race in the classroom, with nearly a dozen more currently considering similar legislation, the DCNF reported.

Then why did the union quietly scrub all that toxic CRT stuff from their web site?