A police department spokesman told Fox News that the shooting happened at the 36th St. station in Sunset Park. And officers reported a suspect remained at large.

Fire Department officials said firefighters responding to a call about smoke at the location found multiple people had been shot and several explosive devices had been placed at the location. 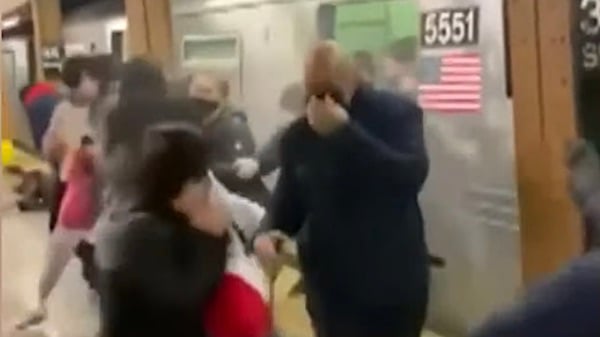 Officials later updated to confirm that the explosives had been defused or removed.

“In regard to the multiple people shot at the 36th Street subway station in Brooklyn, there are NO active explosive devices at this time,” the police department said on social media.

“Any witnesses are asked to call @NYPDTips at #800577TIPS . Please stay clear of the area. More provided information when available.” 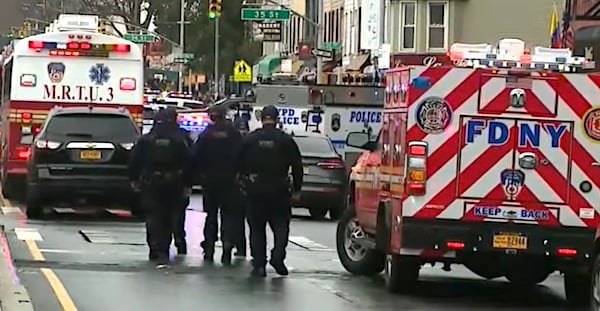 Outside the scene of a New York City subway shooting on Tuesday, April, 12, 2022. (Video screenshot)

“This is not being investigated as an act of terrorism at this time,” said NYC Police Commissioner Keechant Sewell.

The suspect had been described as a 5-foot-5, black male with a heavy build wearing a green construction-type vest, a red-colored sweatshirt and a gas mask.

“No more mass shootings. No more disrupting lives,” Hochul declared. “It has to end and end now. … We’re sick and tired of reading headlines about crime.”

“There are people in a hospital fighting for their lives at this very moment. Those are the people we’re focused on.”

“NYPD Counterterrorism units are responding to the scene, while additional units, including police K9s and heavy weaponry, have been deployed to subway stations around New York City, the high-ranking law enforcement source added,” Fox reported.

Nearby hospitals were treating victims. 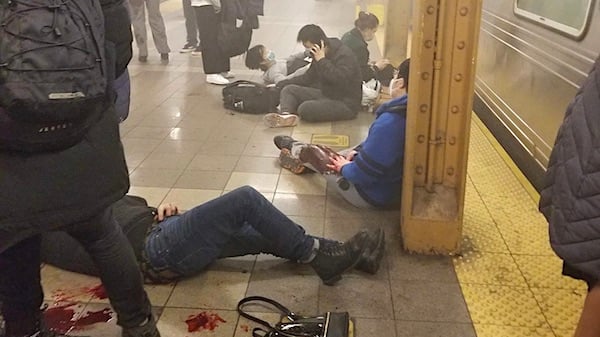 And police initially warned the public to avoid the location because of the presence of multiple emergency vehicles as well as the needs to the officers investigating the scene.

The New York Post published several images of a blood-spattered floor with injured passengers attending to their own – or others – injuries.

The attack happened about 8:30 a.m. on a Manhattan-bound N train.

The Post reported the suspect apparently set off a smoke grenade moments before gunfire erupted.

Video revealed screaming passengers racing out of the cars onto the platform as soon as the train doors opened, and smoke billowing out.