Texas lawsuit against four states goes to the U.S. Supreme Court: States required to respond by 3 p.m. EST Thursday for selection of 62 electors

WASHINGTON, D.C.—The U.S. Supreme Court has responded to Texas Attorney General Ken Paxton’s Tuesday lawsuit requiring Pennsylvania, Georgia, Michigan, and Wisconsin to reply to the court by 3 p.m. EST Thursday as to why they can go forward in selecting or seating their 62 electors this Monday, Dec. 14 to the Electoral College.

The Texas lawsuit claims that “last-minute unconstitutional changes to election laws, treated voters unequally and triggered significant voting irregularities by relaxing ballot-integrity measures” by specifically “violating the Constitution Electors clause of Article 2 (and the 14th Amendment), due process claim, and the equal protection claim” that in effect “invalidated the results of the Nov. 3 election in these states,” according to Jordan Sekulow, Executive Director of the American Center for Law and Justice who aired broadcasts both yesterday and today heard nationally by millions and watched by thousands on social media. (Editor’s Note: To see today’s ACLJ broadcast go to:

“I really appreciate that the court has asked the other states to respond,” said Paxton while being interviewed by Fox News’ Sean Hannity. “So, we have a chance, after they respond, to go to the court and make our arguments on both sides and at least let the Supreme Court make a decision on what is the law in this case.” (Editor’s Note: To see the legal brief filed by the Texas Attorney General to the Supreme Court go to:

The U.S. Supreme Court case given the docket number of 220155 presents “an extremely important question of law: Did the Defendant States violate the Elector Clause (or the 14th Amendment) by taking—or allowing—non-legislative action to change the election rules that would otherwise govern the appointment of presidential electors,” said ACLJ attorney Harry G. Hutchison.

Article II, Section 1, Clause 2 of The Constitution states: “Each State shall appoint, in such Manner as the Legislature thereof may direct, a number of Electors, equal to the whole Number of Senators and Representatives to which the State may be entitled in the Congress.”

Attorney Harry Hutchinson continues: “The Constitution must be followed, even during inconvenient times that include a pandemic. This is especially true now because lawful elections are at the heart of our constitutional democracy. Using the COVID-19 pandemic as an excuse to grab power, government officials in the Defendant States of Georgia, Michigan, and Wisconsin, and the Commonwealth of Pennsylvania apparently usurped the authority given to them by the state legislatures.

“The Defendant States’ misconduct includes revisions, reinterpretations and in some cases, the decision to ignore outright their state’s election statues apparently to favor one candidate over another. Evidently, each of the Defendant States acted in a very common and now familiar pattern: State officials…announced new rules for the conduct of the 2020 election that were inconsistent with existing state statutes defining what is lawful.

“To repeat, the Constitution gives the sole power to make election-law changes to state legislatures rather than authoritarian elites sitting in state capitals…Election integrity and election security matter to the nation.”

“The prayer for relief in the lawsuit is that the states cannot seat the electors and basically that the legislatures should, in each of these states, appoint new electors,” said Sekulow and if they cannot; then the U.S. election as designated by The Constitution would go to the House of Representatives and each state legislature would be given one electoral vote.”

Texas Attorney General Paxton requested the U.S. Supreme Court to “extend the Dec. 14 deadline for Defendant States’ certification of presidential electors to allow these investigations to be completed” and to do so in order “to safeguard public legitimacy at this unprecedented moment and restore public trust in the presidential election.”

President Donald J. Trump is expected to join the lawsuit. His campaign’s legal team stated yesterday: “Justice Ginsburg recognized in Bush v. Gore that the date of ‘ultimate significance’ is January 6, when Congress counts and certifies the votes of the Electoral College.

“The only fixed day in the U.S. Constitution is the inauguration of the President on January 20 at noon. Despite the media trying desperately to proclaim that the fight is over, we will continue to champion election integrity until every legal vote is counted fairly and accurately.”

The Texas lawsuit argues that a victory for former Vice President Joe Biden in the four states is a massive statistical improbability considering President Donald Trump’s lead in each state in the early hours on the morning after Election Day. Citing an affidavit that hasn’t yet been publicly disclosed, the plaintiffs claim that Biden’s chance of winning given Trump’s lead is ‘less than one in a quadrillion to the fourth power, or 1 in 1,000,000,000,000,000. 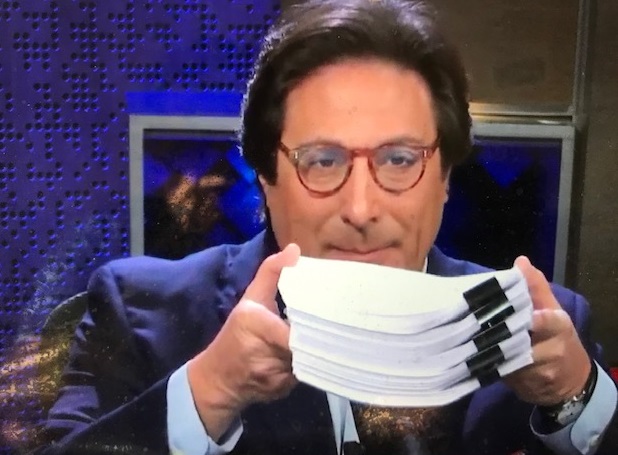 Trump is a loser, yet again.

Praise God for His love of America! 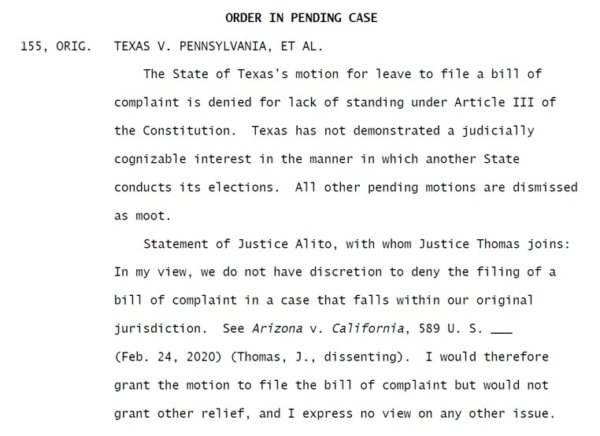 It’s becoming clear that the SCOTUS is in the pocket of deepstate actors.
The only ones left that we can trust are God, Guliani, Carone and Trump (Donald – the others are deepstate Democrat pornographers).

Oh, here’s another possibility. Maybe, just maybe, Trump actually legitimately LOST the election. Maybe all of these “deep state” actors are actually just doing their job and not engaging in this illicit power grab. That is also a possibility. Occam’s Razor, after all.

That is very much the case Hank. The only issue is that Occam’s Razor was never envisaged the intentional misinformation campaigns that are being waged. The problem is that outcomes are being characterized as perverse and the result of a conspiracy, when in fact the outcomes are appropriate and those suggesting they are perverse are the conspirators. Unfortunately that is rather complicated set of facts to comprehend for some of our less cerebrally endowed brethren.

17 states have now joined this lawsuit.

Their Attorneys General are just making sure they stay on Trump’s Christmas card list. They are all GOP and don’t have a legal leg to stand on.