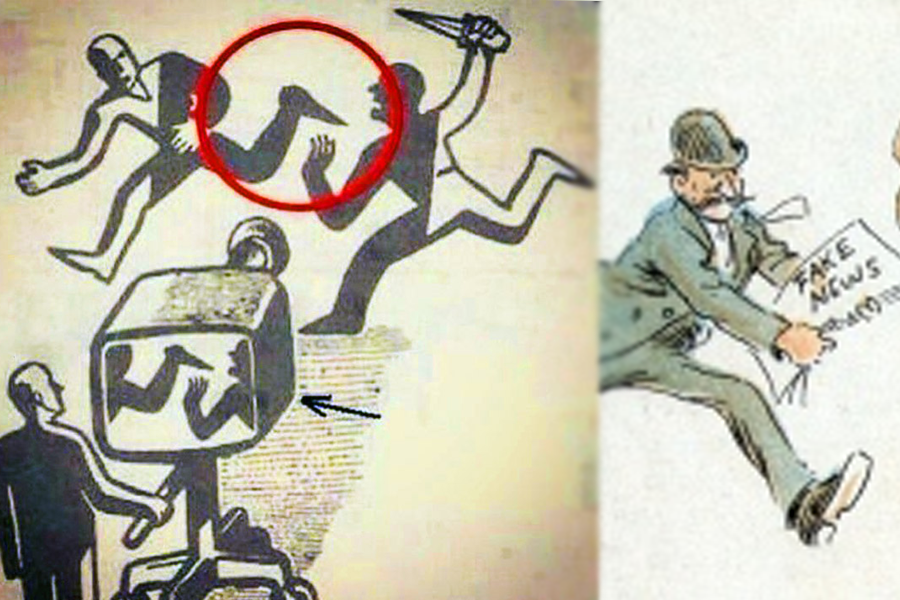 This is an accurate description of the sorry state of journalism and the media today. Gone are the days when any mass media had a semblance of balance, fairness or took their obligations to gather and report information in an honest way seriously.

Gone are the days when a salacious piece of important newsworthy information required confirmation from at least two credible sources. Gone are the days legitimate journalists called you for comment prior to reporting anything about you, thus giving you an opportunity to address any public or private accusations against you. This is certainly not the case with the malicious, dishonest and politically correct corporate media that dominates the United States today.

There was a time in America in which, although the media certainly leaned left and had its early extreme outliers with substantial reach and influence, there were still honest journalists merely seeking to ferret out, gather, source and confirm legitimate news.

As my friend and brother in Christ, Sean Hannity says, “journalism is dead in America.” Journalism has been replaced by a system in which any politically correct and incendiary charge takes root and becomes dominant on Twitter, which drive the Washington Post and the New York Times. Thus, the corporate-owned media tsunami of defamation, vituperation and most importantly, omission of key facts, when reporting on any Republican or, God forbid, Trump supporter in order to bend the narrative.

Based on nearly forty-years deep in the bowels of the corroded rectum of our two-party system, I remember a time in which real journalists observed real rules about protecting their sources, triple-checking information, honoring “off the record” conversations, and the mutual use game surrounding politics. Those in ‘the Arena” used to work for the mutual benefit of both their careers and professions.

That is why when in the wake of my heavy-handed and the entirely unnecessary manner of my arrest, in which twenty-nine SWAT, night-goggle-wearing, M4-fully automatic assault weapon bearing, FBI agents surrounded my home in the predawn hours of January 25th, 2019. They were companied by seventeen armored vehicles, with an FBI helicopter overhead and with backup support from the Fort Lauderdale Police, and a CNN camera crew – the only media outlet allowed within the closed perimeter of my home (a mere twenty-five feet from my front door).

Recently I collected a sworn affidavit from a recently retired Fort Lauderdale Police Officer who swore, under oath, that on the day of my arrest he told the CNN crew that media was to be kept behind a line at the end of my dead-end street and that they must leave. He was admonished by a senior FBI agent who told him that the CNN crew had been given special permission to remain in place.

To further complicate the story, I was arrested at 6:06. At 6:11 A.M., a CNN reporter sent my attorney Grant Smith the full text of my indictment which was sealed at that hour and was not unsealed until 9:30 A.M. by a Magistrate in DC. The indictment sent to my attorney included no court stampings or marking. Only the attached meta data tags revealed the author of its content, the initials of Mueller’s hitman, Andrew Weissmann.

CNN’s claim that the document was downloaded from the internet is false and their assertion is easily proven to be contrived to hide their complicity in an illegal act. The leak of the government’s decision or timing for the execution of an arrest and search warrant is a felony.

The FBI’s claimed that taxpayers had to squander $1.1 million on the media extravaganza that made me a household name and the number one martyr in the America First movement. Even those disinterested in politics, or not particularly inclined to Donald Trump, could see the politically motivated overreach and the outrageousness of the way I was arrested for a first time, nonviolent, white-collar crime which turned out to be fabricated.

The Government’s claim that I had to be arrested in the way I was because I was a “flight risk” was quickly disproven at my arraignment when the government. Unlike in the recent case of Trumps longtime friend Tom Barrack, falsely accused of lobbying for the UAE without filing, prosecutors asked for no bond and released me on my own recognizance. I was required to report to a probation officer in DC on a weekly basis and found those public servants who worked in the D.C. probation office to be honest, helpful, fair and courteous.

As one who has faced the malicious and relentless attacks of a hostile media largely because I have been effective in spoiling the plans of those who tried to remove Trump and their unmitigated hatred for him is reflected onto me. I have experienced this technique over and over again.

Whenever you read a story that mentions me online that says I am a “convicted felon,” you are reading a factual inaccuracy. The granting of an unconditional presidential pardon to me has the effect of canceling my legal status as a convicted felon. You could say that I am a “former convicted felon” but that’s not what The New York Times, Salon, MSNBC, CNN, The Daily Beast, The Guardian and other distortionist media outlets reports.

Immediately after my pardon, former Special Counsel Robert Mueller allegedly penned an Op-Ed piece for The Washington Post saying that I deserve to be a convicted felon -and was – but more interestingly falsely accused me of having “contact with Russian intelligence agent(s).” In fact, Mueller never produced any evidence that I met with any one agent, never mind two. It’s a lie and his “convicted felon” charge is outdated.

Mueller’s instance that Guccifer 2.0 is/was a Russian intelligence asset is entirely unproven although the WaPo, and the rest of the anti-Trump chorus in corporate media, believes Mueller’s claims as if they were gospel. In fact, there is far more digital evidence that would indicate that Guccifer 2.0 – who may or may not even be a person or a group of people – is most likely a U.S.-based hacker and blogger who is most strangely using software online registered to an employee at the Democratic National Committee. But Mueller is not held to account for his lie.

The other falsehood that has now become accepted lore is that I am a “self-described dirty trickster.” In fact, I have never described myself thusly. I have certainly talked about the fact that others have called me this and because of the ubiquitous nature of those attacks it will probably end up on my gravestone.

When the LA Times reported that I was a “self-described” dirty trickster I asked for and received a correction. LA Times researchers could not find a credible source for the claim that I had ever described myself as a “dirty trickster.”

I have quipped that “one man’s dirty trickster is another man’s freedom fighter.” It is merely an observation that everyone’s impressions and perceptions are based on their point of view. It’s like Rashomon, the epic Japanese film in which a single event is seen through the eyes of multiple individuals who witness the same events but see different things.

In all honesty, anytime you see both of these falsehoods in any one new story regarding Roger Stone, I suggest you exit the link and open StoneColdTruth.com.

Roger Stone is a political strategist and pundit and a long-time political advisor and friend of President Donald Trump. Stone was a victim of the Mueller witch-hunt and was charged with lying to Congress in order to pressure him into testifying against the President. Stone refused. After Stone’s trial was corrupted by a biased Judge, a corrupt Jury Forewoman and a stacked jury and prosecutors sought to incarcerate Stone in a Covid 19 infested prison in violation of all current legal precedents, DOJ policy, and without regard to Stone’s health or age, President Donald Trump pardoned Roger Stone on December 23, 2020. On November 3, 2020, at midnight (!) the US Justice Department by court order released the long-hidden sections of the Mueller Report in which the Special Counsel admitted that his office with its unlimited legal authority and unlimited budget had found ” no factual evidence” to tie Roger Stone to Russsian Collusion, Wikileaks collaboration or the alleged theft of John Podesta’s e-mail. Stone is a New York Times Bestselling author and has returned to political commentary at StoneColdTruth.com.