The Business of Camarillo City Council continues 12 May 2021. Council meeting venue changes to Camarillo Library on 19 May 2021

The business of the city is important, very important. Open council meetings are important, and in fact required by law. Every Camarillo Councilmember understands the duty of this public format.  It’s an obligation required by the Brown Act. Attendance at the second Camarillo City Council in-person meeting on Wednesday night, 12 May 2021 was light. The meeting to be viewed on YouTube https://youtu.be/l4EhZsnY3Us.

The Camarillo City Council meets at 601 Carmen Drive, Camarillo CA 93010. Schedules, agendas and minutes of all public city meetings can be found at

https://www.ci.camarillo.ca.us/ or reviewed in person at the city offices at the same address during business hours. 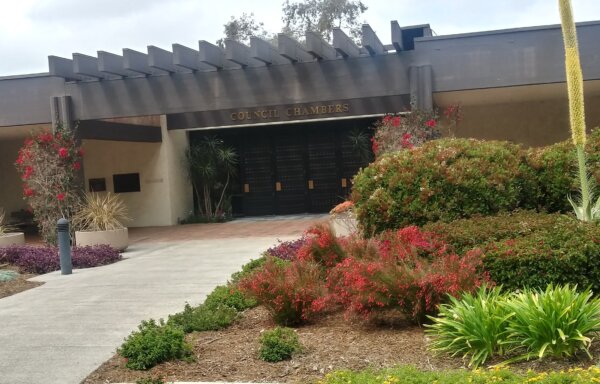 Camarillo is opening up, and public meetings are commendable. A truly bold move, from the perspective of employees of any other municipality. If you doubt this, call any city in Ventura County and ask when they will begin in-person public meetings. You’ll get silence, “no comment” or ”maybe June 15th”, which is the State forecast to reopen. When I told one of these persons Camarillo’s City Council has reopened live council meetings, I got the response. “Good Luck with that”

I watch the council meeting on my phone, live on Youtube from the gavel. It’s more convenient than in chambers. Life gets in the way of an in-person gavel, but I make a point to be there for the public comments.

I  made a public comment at the council meeting on Wednesday. While listening on my walk a council member queried the very agenda topic I had a comment about. Council interest in a topic made it seem more important. My public comment was to recommend large expenditures for equipment include a public declaration regarding how many vendors bid to provide an item, not just the winning proposal. I also wanted to experience mask speaking to others in masks, to gauge how it feels, compared to speaking without a mask. More on that later.

Public comments didn’t disappoint. The highlight of the comments was Deborah Baber, who approached the podium in a see-through American flag draped over her upper torso.

To describe her image, think ”Ghost of Independence Day Past”. Ms. Baber spoke of responsibility, and framed her argument with concerns that the government serves the citizens, not the other way around. Read her statement here. 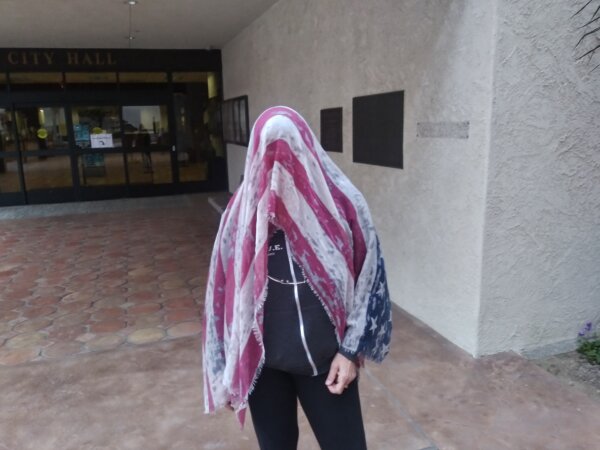 I was reminded of the disruption in the first in-person council meeting, when the council directed individual citizens to have a consequence for not masking during the public meeting. On 12 May, each public segment of the council meeting was led with a statement that proceedings would be paused if citizens didn’t mask. A step back from a position that citizens should have an individual, personal consequence for not masking. I assume masking was discussed after the first public meeting with the Ventura County Sheriff, and law enforcement didn’t take a posture that involved arresting people for failure to comply with a council policy. I attempted to ask the Ventura County Sheriff about their policy concerning masks, but they have not responded at the time of this report.

Another public comment framed the issue of doxing, where citizens are harassed post-comment by others who disagree with their statement, and access to the citizen is facilitated by the publishing of information supplied by the citizen before they spoke publicly.

I’ll close with my experience as a public commenter. It was difficult. I’ve spent many years speaking in public, and this was more difficult. Masking is restrictive. During my comment some council members nodded their heads as they followed my comment. I felt self-conscious gulping air while speaking. None of the council, city attorney and city manager, and city staff wore N95 mask. There were a few disposable “surgery” masks, but none that can filter viruses. The Ventura County Deputy Sheriff wasn’t wearing an N95 either. Versions of cloth masks were the preferred accessory with the exception of the few non-N95 surgical face coverings. In the previous city council meeting, a number of people in the gallery wore scarves as masks, which have no filtering capability.

This all “may” become a mute point, as Sprouts has officially made mask wearing optional, as of 12 May 2021, based on an anonymous employee who stated customers are no longer required to wear face coverings. The Sprouts website still encourages masking, and doesn’t state masks are optional. Walmart has announced lifting mask requirements as well, effective immediately.

As Ben Shapiro states on his podcast, all of the guideline changes that are now reflected are based on data known to the experts for over two months.

Camarillo reopened our city offices and council chambers, consistent with the CDC published data, but with a masking requirement and plexiglass. In Camarillo, it’s no longer about a Federal guideline, or guidelines set by State government. Gov Newsom has stated all restrictions, including masks, may go away on 15 June 2021.

As a final note, the City Clerk has just posted that the May 19th City Council meeting will be held at the Camarillo Public Library at 4101 Los Posas Road, Camarillo, CA 93010. The public open session will begin at 5:00PM

Why I support Tim Sprinkles For Camarillo City Council District 5