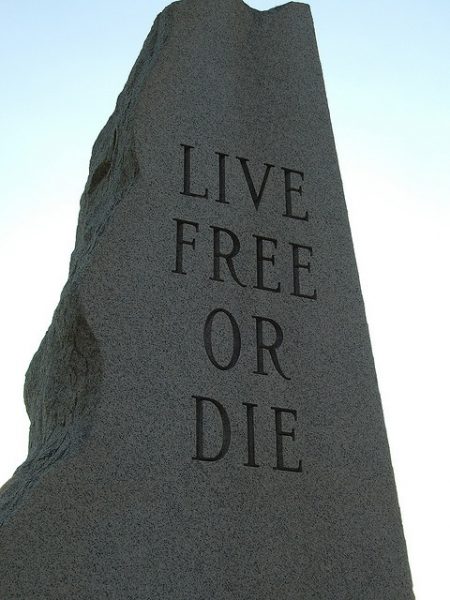 Once again, in the 2021 Cato Institute rankings of personal and economic freedom, Freedom in the 50 States, New Hampshire is ranked as the freest of the United States. Canada’s Fraser Institute gives New Hampshire the same freest state ranking. The state’s famous motto, “Live Free or Die,” is prominently imprinted on residents’ license plates.

When I share that New Hampshire has neither a sales tax nor income tax, I am often met with incredulous looks, a pregnant pause, and then the inevitable question: “But, how does the State get its money?” For some, it is self-evident that a large government is necessary to run a modern and prosperous society. New Hampshire should give pause to those who believe the big-government-is-necessary argument.

What about services in NH? A WalletHub survey rated state and local taxes with 30 metrics measuring education, health, safety, the economy, infrastructure, pollution and more. Once again, New Hampshire gave taxpayers their largest return for their tax dollars. New Hampshire residents “pay the second-lowest taxes in the country, roughly $2,700,” while benefiting from “one of the best” school systems, the lowest crime rate in the nation, very low health insurance premiums, as well as having the lowest in the nation “share of residents living in poverty, 7.6%, and the best work at home environment.”

No wonder Americans believe state governments waste up to 42 cents on the dollar. Apparently, voters in some states believe waste is a necessary evil to get the services they want.

But is waste of taxpayer money necessary? In 1995 my family and I spent our first summer in New Hampshire. We were buying tickets for the summer cable car ride up Cannon Mountain in Franconia Notch. I was surprised to see that the cashier was using a vintage Kaypro computer, circa 1984. Curious, I asked why the park was using such an “antique.” The cashier cheerfully explained that since the machine was used to keep track of the number of tickets sold, nothing more was needed. She felt no sense of deprivation using an old computer.

Part of New Hampshire’s uniqueness stems from its true grassroots representative democracy which helps safeguard liberty. Even though New Hampshire is a small state (it ranks 42nd in population), with 400 members, New Hampshire’s House of Representatives is the third-largest parliamentary body in the English-speaking world. Only the U.S. Congress and Britain’s Parliament are larger.

Astonishingly, the annual salary for a NH representative is $100. In contrast, a California assemblyman earns $114,877. As to “perks,” each elected representative in NH basically receives a chair and a coat hanger, rather than a large staff. Serving in the NH House is not a career move that leads to power and wealth. There are few “safe” seats for incumbents. Few career politicians means barriers to entry are low: “The National Council of State Legislatures called New Hampshire ‘the nation’s swingiest state,’ noting that one or both state chambers have flipped in six of the past eight elections.”

As a result, a representative cross-section of men and women serves in the state house: “[b]usinesspeople, homemakers, educators, engineers, doctors, lawyers, students and retirees.” The taxpayer comes before special interest legislation and taxes remain low. NH residents routinely expect candidates to take the NH pledge that they won’t support a sales or income tax.

Once, the U.S. Congress was also a body of citizen representatives, not career legislators. According to the Congressional Research Service,

Many lawmakers in the 18th and early 19th centuries might be characterized as “citizen legislators,” holding full-time nonpolitical employment and serving in Congress on a part-time basis for a short number of years. According to political scientist Randall Ripley, “In the premodern Congress, Members came and went rapidly. There were few senior Members. Life in Washington was not pleasant; Congress did not seem very important.”

It was not until “after the Civil War, [when] circumstances changed and precipitated a rise of careerism in Congress.” Today, few lovers of liberty would argue that long-term professional legislators are good defenders of the natural rights recognized in the Declaration of Independence and guaranteed in the Constitution.

Term limits, eliminating large congressional staffs, and salary cuts could be one way to roll back the clock. But it turns out, there is another way.

The population of New Hampshire is 1,377,529, which means each of the 400 members of NH’s House represents approximately 3,400 people.

The Founders debated how to keep the number of representatives small as the country grew. The Congressional Apportionment Amendment was proposed as the first amendment to the Constitution:

Given America’s current population of approximately 333 million, if the amendment had been ratified, today, the number of members of the U.S. House of Representatives would be well over 6,000.

Today, each member of the U.S. House represents over 700,000 people, instead of the 50,000 people proposed in the Amendment. The US House is hardly the grassroots democracy that New Hampshire enjoys.

You may be thinking, well, thank goodness the proposed first amendment never passed. How could Washington handle 6,000 members in the House? Imagine how much tax money would be spent on staff.

You’re thinking inside the box. Do what NH does: Give each representative a $100 salary and a coat hanger. What if service in the U.S. House of Representatives was, once again, not a career move or a pathway to wealth? Perhaps the 6,000 plus members could meet remotely, with the public able to listen to all hearings.

You may be thinking only the wealthy would serve. That is not New Hampshire’s experience nor was it the experience in 19th century America.

If you think the Congressional Apportionment Amendment is a dead letter; perhaps you are correct. But Congress never set a time limit for passing the Amendment. If 27 states join the 11 that have passed the Amendment, it will become part of the Constitution.

If you dream of a world where Congress respects your rights more than they covet campaign contributions from crony interests, the Congressional Apportionment Amendment would go a long way to restoring the Founder’s vision of a republic that guarantees individual rights.

Barry Brownstein is professor emeritus of economics and leadership at the University of Baltimore.

He is the author of The Inner-Work of Leadership, and his essays have appeared in publications such as the Foundation for Economic Education and Intellectual Takeout.