The ONLY Issue in the 2022 Election is Voter Fraud 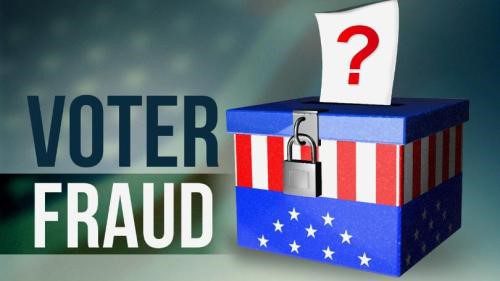 A friend recently reminded me of an article I had written on October 5, 2020, just before the presidential election that found all TV networks reporting that President Donald Trump was crushing Joe Biden across the board—including in the all-important battleground states—and then that coverage mysteriously stopped cold, disappeared for over three hours, and reappeared to report that the exact opposite was true, that Joe Biden had magically become the Crusher in Chief, ultimately “winning” the 2020 election.

“Remember the title of your article?” my friend asked me. In fact, I did, since it was the only time in decades of writing that I had capitalized a word in the title. It read like this:

The ONLY Issue in the 2020 Election is Voter Fraud.

Well, it’s election time again, and sure enough the same thing is true. And after viewing Dinesh D’Souza’s jaw-dropping “2000 Mules,” which documents the massive fraud that indeed took place in 2020, and after reading dozens of reports about audits that were done in the battleground states and others which uncovered overwhelming voter fraud, including thousands of dead voters, it appears that voter fraud is once again the ONLY issue of concern. Great concern.

When you peel back all the layers of the onion of a human being’s psychology, our species is really not that complicated. Whether man or woman, black or white, rich or poor, from whatever background, religion, or culture, we all have similar if not identical needs.

In 1943, psychologist Abraham Maslow introduced the concept of a Hierarchy of Needs, which hasn’t changed much since then. They include:

Physiological needs that are vital to survival:

Yes, these are needs common to everyone, and yet in the past two years, under the Biden regime, every single one of them has been threatened if not destroyed.

When you destroy basic needs

With the stupefying mismanagement of our national budget—and in spite of the booming economy and high employment he inherited— the Biden inflation factor didn’t take long to set in, followed in short order by the Biden Recession. There went the security most Americans felt in buying food and gas and paying rent. Even reproduction is down as younger people hoping to move out of their parent’s basement have hunkered down for an indefinite stay.

At the same time, there went the country’s security and safety needs. With four-million illegal aliens swarming over Biden’s open southern border, including drug cartels with so much Fentanyl that the deaths of young people have already increased exponentially, and thugs and criminals being bused and flown in the middle of the night to cities and suburbs throughout our country, even a walk in the park or a trip to the supermarket has become a looming threat.

And with liberal legislators all over the country ignoring the massive criminality of thuggish groups like Antifa and Black Lives Matter, and innocent pedestrians being assaulted—sometimes fatally—and the passing of no-bail laws that put rapists and muggers and even murderers back on the street 20 minutes after they are so-called “booked,” life in America has become a daily and nightly menace.

And let’s not forget Biden’s pathetic reliance on foreign oil, going hat in hand literally begging for the resources to keep us going, while only two years ago, President Trump had achieved one-hundred percent energy independence—to last us 500 years!

Then there is the war in Ukraine and the billions (going on trillions) we have sent to what is now widely recognized at The Money-Laundering Capital of the World!

A normal person would look at the bleak state of our union and conclude that the powers-that-be—those running the show from the Oval Office—are so woefully inept, have such patronizing contempt for We the People, and such a deep loathing for America the Beautiful, that it would seem to be a given that every Democrat candidate, including those running for the U.S. Senator or the U.S. Congress on Tuesday, November 8, would lose in a landslide.

Over the past many decades—with the advent of electronic voting machines and mail-in ballots—American elections have not been predictable. Why? Because the only thing Democrats have cared about for the past hundred years is winning elections with the goal of inflicting their strangulating socialist/communist and now Islamist style of government on the American people.

Why don’t they want Trump to run again?

In the past two years in particular, they’ve been maniacally obsessed with insuring that President Trump is unable to run again for POTUS, even if the perpetual sore losers of the left have to buy the guns they say they hate to wage a Civil War!

Why? Because citizen-cum President Trump won the 2016 election by exposing:

·         The Democrat racism that has kept blacks with broken families, mal-educated, imprisoned, and impoverished for decades on end.

·         The craven deals that made our country dependent on foreign oil.

·         The crooked money “arrangements” enjoyed by higher-ups like former VP Joe Biden in securing multimillion-and-billion-dollar windfalls for himself, his son Hunter, and his brother James. Ukraine, anyone? China, anyone?

·         The horrible treaties, including the Iran deal, NAFTA, NATO, et al, that benefitted foreign countries significantly more than the U.S.

·         The interest of the “anti-war” Democrats in keeping wars going endlessly (always follow the money).

The method to their madness

Even diehard leftist partisans acknowledge that Democrats have stolen elections over the past many decades by enlisting the votes of illegal aliens, absentee voters who simply don’t exist, cartoon characters, and of course dead voters.

Then there is Ballot Harvesting, a scheme exclusively used by Democrats to, ahem, win elections. According to California political commentator Stephan Frank, anyone—campaign workers, minors, illegals, et al—go door to door to “help” people fill out ballots that strangely favor Democrats and refuse to collect ballots from anyone they suspect of voting the “wrong” way. They even pay them to vote the “right way.”

According to the National Conference of State Legislatures, currently 26 states allow this fraudulence, a practice that was aggressively and somewhat successfully challenged by Tom Fitton of [email protected].

Not to omit ACORN (Association of Community Organizations for Reform Now), in operation since 1970. But the group was exposed for its criminal activities in 2009 by James O’Keefe, founder of The Veritas Project, resulting in multiple convictions for massive voter fraud in several states, and it closed its doors in 2010, although it is believed that splinter groups formed and are active to this day.

The following is a tiny example of the vote-rigging methods used exclusively by Democrats going into the 2020 election:

·         Here’s a beauty from Doug [email protected]: In Pennsylvania, Michigan, Minnesota, and Wisconsin, Democrat activists dressed in black robes have fundamentally rewritten state election laws. Among them are: Mail-in ballots can be received up to seven days after the election and still be counted. These ballots can be missing postmarks and still be counted. The signature on the ballot doesn’t even have to match with that of the registered voter. As a bonus, they have banned the Green Party from the ballot to prevent erosion of the Biden vote.

But Democrats don’t stop! This past August, Michigan Secretary of State Jocelyn Benson’s tried to dismiss the Public Interest Legal Foundation’s (PILF) lawsuit for her failure to remove 25,975 dead registrants from the state’s voter rolls.

In August, the United States Western District Court of Michigan

In July, a hearing on the Maricopa, Arizona, 2020 election audit revealed the following:

·         Maricopa claimed to have provided images of the mail-in envelopes. In fact, they did not.

In addition, a recent Georgia audit of the 2020 election revealed:

·         A Non-Profit group, called True the Vote provided evidence that as many as 242 voting activists flooded as many as 5,500 drop boxes with fraudulent ballots in the middle of the night.

·         Videos also showed that the activists wore blue rubber gloves when depositing the ballots into the drop boxes. This practice was begun when investigations, in Arizona, over the same crime of ballot harvesting were, successfully, prosecuted, based on fingerprints on the ballots.

According to a Google whistleblower in Allum Bokhari’s book, #DELETED: Big Tech’s Battle to Erase the Trump Movement and Steal the Election, when voters find out what Big Tech companies have done to meddle in the upcoming election, they’ll be rightly furious at the attempts of Google, Facebook, Twitter, and other tech companies to sway the election in Biden’s favor.

In addition, Democrats Sen. Charles Schumer and Rep. Nancy Pelosi are closely aligned with groups like Majority Forward (created in 2015) that funnel millions in secret cash into 2020 elections, according to FreeBeacon.com.

Linda Goudsmit, author of The Book of Humanitarian Hoaxes: Killing America with ‘Kindness’, sees the upcoming midterms as yet another “sinister leftist, Islamist, globalist attack on America.” “We are only weeks away from the election,” she said, and “the enemies of America are desperate” and behaving like cornered animals poised for attack. Their survival is at stake because if Republicans take the Congress, they will start the process that President Trump began of taking down the Deep State and exposing them all.

It must be incomprehensible to all those liberals/leftists/progressives—with all their prestigious college degrees, high IQs, impeccable credentials, fancy job titles, and positions in the highest reaches of the American government—that every ploy they used against President Trump, every arch machination, every exquisitely formulated plan of action, all resulted in crashing failures, and that everything they’ve done to try to legitimize Joe Biden and enact his deeply anti-American agenda has resulted in equally colossal failures.

But still, there remains ONLY one overriding issue in the 2022 midterm elections, and that issue is Democrat Voter Fraud!

Our Republican and Conservative leaders have had two years to right the egregious wrong of the 2020 election. If that sordid history repeats itself, they only have themselves to blame!

Joan Swirsky is a New York-based journalist and author. Her website is www.joanswirsky.com, and she can be reached at [email protected].