The Paradox of Toll Lanes in California

As a kid when my family traveled on vacation to the East Coast, my Dad spoke with distain about turnpikes where one had to pay a fee to travel.  Even though the Howard Johnson Inns who dotted these roads were perceived to be “cool”, it was often remarked that we were lucky such toll roads could not be found in California.

This of course has changed in the Golden State the last 20 years or so.  Even though California has some of the highest gas taxes in the country, much of these funds have been siphoned off to pay for other services unrelated to motor vehicles.  As a result local communities faced with gridlock, especially during commute hours, have resorted to building premium pay lanes on busy freeways to ease congestion.

It isn’t a difficult service to sell.  On a dollars and cents basis if one is making $75.00 an hour, having to pay $7.00-10.00 during work hours to save time commuting is a bargain. Such demand has resulted in financing these bonds easy to do.

The biggest user of these toll roads and special lanes has been in Orange and Riverside Counties. They have arguably some of the most congested highways in the State.  These “pay to play” services can be found throughout California, and are expanding each year.  It is apparently a good business because Moody’s has recently increased the credit rating of the Foothill Transportation Corridor Agency (F/ETCA) TO Baa2 status.

In fact things are going so well that The Transportation Corridor Agency recently paid 12.8 million dollars in unfunded liabilities to the Orange County Employees Retirement System.

A similar story can be heard in the Bay Area where toll lanes have been welcomed by frustrated commuters who are already paying  6 dollars and above to travel across the Bay, Golden Gate, and other bridges in the region.  Much of these funds are used to subsidize BART, ferries, and bus services; but are still running at a deficit.  Fare increases on public transportation have become almost an annual ritual.

The need for toll roads and special lanes on Freeways (which are no longer free) is a growing trend  up North.  There is no indication that revenue from new gas taxes will ease or even slightly reduce the need to expand the FASTRAK system.

Outside of funding the “Bullet Train” and public transportation services that few use, there is another problem that not been dealt with in California.  The State has the 7th highest cost of building roads in the Country.

Much of this can be attributed to the incompetence of Caltrans and the interpretation of prevailing wages which makes doing public works projects in California so costly. But regardless of reasons, we can probably look forward to local communities taking the responsibility to maintaining and building new roads because the State simply does not care.

Outside of building more bike lanes, such mundane tasks as filling pot holes and maintaining the highways are simply not a priority with the Sacramento crowd.

Apparently Gavin Newsom and his Leftist cohorts feel that using fossil fuels should be discouraged. This point of view allows them to receive tacit approval for supporting the radical “Green New Deal”. Unfortunately such policies don’t bode well for those who depend on gas powered vehicles for their livelihoods.

Most adversely affected are those of limited income.  Higher gas prices, registration fees, increased enforcement fines, and these toll roads are totally non-progressive by definition. How can Democrats take for granted the vote of those of limited income when they are screwing them every which place but loose on transportation?

These folks pay the same rate of gasoline tax as the wealthy. This group does not have spare change to cross toll bridges on a regular basis.  How can the State pretend to care about these people when they have such an elitist transportation policy?

Even worse progressives are giving tax breaks and free access to high occupancy care lanes to those who operate electric vehicles.   It is not enough that these people are not paying even a small share of gas taxes to maintain the roads; but are also receiving energy saver rebates from the government for being pollution free.

Again we talking about upper income folks who can afford to purchase pricey electric cars.  In most cases the middle class raising families lack the resources to participate in this process. Most everyone but the rich is FOB Sidewalk when it comes to obtaining non-polluting conveyances.

Perhaps the State of California can make this up to the poor by giving them reduced fares on the Bullet Train when it starts service on the 113 mile leg between Fresno and Bakersfield.  The only problem with this plan is finding clientele who are interested in making such a trip, even if it is gratis.

This is not a good State to live in if one is low income, poor, or even middle class.  Almost all taxes, except for income of the wealthy, are non progressive.  Sales tax adversely affects those of low income most because they pay a larger proportion of their disposable resources to Sacramento.

All the State government can offer is providing welfare programs to assist low income people to be able to survive. Apparently this survival does not include exemptions from sin taxes or other schemes the state might have to extract more blood from their economically disadvantaged resident’s stash of turnips.

In the end the poor pay more in California

How can these leftists consider themselves to be progressives when they are unwilling to construct new freeways and make much needed improvements on the highways, even with higher gas taxes?  It might also be asked how California got along economically in the days when the State government was able to build a network of freeways which were the envy of the world without toll roads and special diamond lanes?

Back then California was not supporting the medical and legal bills of undocumented residents living in Sanctuary cities.  They also were not paying additional sums to support the pensions of government employees and an inefficient bureaucracy that makes constructing of affordable housing virtually impossible.

With this in mind, perhaps Gavin Newsom and his minions in the legislature aren’t quite as progressive as what they might imagine? 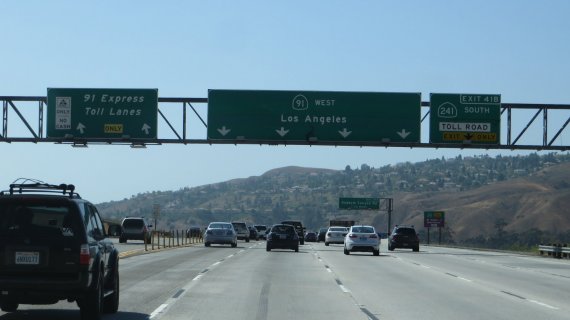