The Salton Sea Management Program (SSMP) is part of the California Department of Water Resources. The phase I plan runs from 2018 through 2028. Goals focus on habitat rebuilding and can be read here. The SSMP formed an expert panel to review the responses to the RFP. Read about that process in the previous article about the Salton Sea. The process includes a diverse group of landowners in the area as well as citizen groups, State agencies and Federal agencies. According to the invitation to the February 17, 2022 webinar, the expert panel was formed as follows:

The committee is composed of scientists with specialized expertise in key resources (hydrology and water quality, geography, air quality, biological resources, and socioeconomics) related to the Salton Sea and/or experience with the application of scientific data to environmental management.

The image below is taken from the state presentation showing the population of the Expert Panel as of this meeting. This committee is not closed at this point. 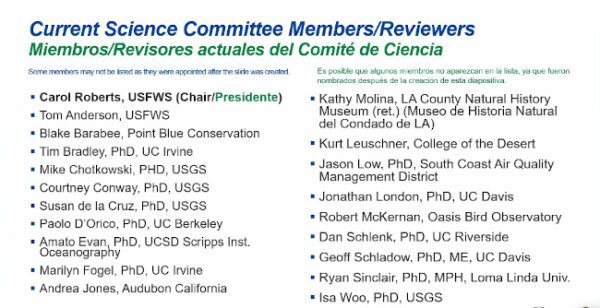 The first draft of the SSMP Monitoring Implementation Plan (MIP) is available for download here. This document was written by ESA, a Sacramento based consulting firm. The goal is a final MIP in late May 2022.

The document serves as a baseline for future work of this committee and is organized as follows (page 15 of MIP):

Nathan White, Agess Inc, asked about regional climate modeling and the inclusion of the effects of evaporation. He asked if this topic is the purview of the Scientific Committee? Tonya Marshall, Salton Sea Program Manager, responded. She is not sure, she said, but this has and will be discussed. Dr. Ramona Swenson from ESA asked rhetorically “where do you draw the line?”.

Art Gertz, meteorologist, asked about acre feet of fresh water produced at the Salton Sea annually and how does this compare to other reservoirs in the United States. Ms. Marshall suggested a look in the MIP to see if this topic is included. Topics may be suggested for addition. There is no meteorologist on the committee, she said, because it was not a discipline they included.

Chuck Parker, who lives in the Coachella Valley and is part of the Salton Sea Coalition, spoke of research indicating major greenhouse gas emission of proposed Salton Sea plans due to the effect of the rich carbon organic materials at the bottom of the Salton Sea which will be exposed potentially. Emissions must be measured at the Salton Sea, he said, and estimate future possible emissions for various solutions. One such study was published here although this was not specifically mentioned. Ms. Marshall concurred that there was much to be monitored.

Stephanie Martin asked about monitoring the indigenous population local to the Salton Sea. How are Lake Cahuilla and Lake La Quinta connected to the Salton Sea? Ms. Marshall agreed the tribes’ knowledge is important and need to be on the Science Committee. Dr. Swenson agreed that air quality should be included and pointed out that the air quality near the Torres Martinez land was discussed, but the entire Coachella Valley could be considered for discussion.

Joan Taylor, a life long resident of the Coachella Valley, recommended the phase I document be translated into Spanish due to the large Hispanic speaking population. Ms. Marshall said the draft is highly technical and would take more time and suggested an “interpreted” Spanish documentation.

Dr. Andrea Neal mentioned the short and long term issues and assumptions of the sales of lithium mining. Dr. Swenson said they must focus on the current coalition at the Salton Sea and asked rhetorically if this will enhance or detract from the coalition? Dr. Neal suggested a set of data for long term monitoring of for-profit entities and perhaps a tax incentive. Ms. Martin responded to this idea as a way to improve relations with partners.

Barry Lehman, professional landscape architect Cal Poly, suggested a source data repository for student use. Marshall concurred but Dr. Swenson said such a project would need to be organized and they are not at the data analysis stage.

Tom Sephton, revisitng Chuck Parker’s comment about CO2 and methane said this was something not analyzed in the past. He also suggested a plan for monitoring fish population. Dr. Swenson said shore information could be standardized.

Luis Olmedo, CCVHealth, agreed with Tom about having an open source repository and felt the committee had overlooked capacity and skills in the Coachella Valley, where a wealth of data already exists. True equity, he said, involves inviting locals to participate in procuring, research and knowledge. Ms. Marshall said they are looking at a way to collect and incorporate more of the community.

Ian Faloona, Professor of Science at UC Davis, is a meteorologist and air quality scientist, who volunteered to be on the committee. Ms. Marshall said it is still possible for people to be inserted into the committee.

Rob Simpson, Director Development Agess, asked if there are enough wells in the Coachella Valley to monitor the impact of lowering the regional water table and how it affects the Coachella Valley aquifer. Is there a system to monitor? He suggested a “mezzo scale” model for climate and to reduce evapotranspiration in the region by millions af/y. He referenced this site at the CVWD.

Ms. Marshall said the end of the hour for the webinar had been reached and encouraged all whose questions had not been addressed as well as others in the listening audience to submit questions electronically. 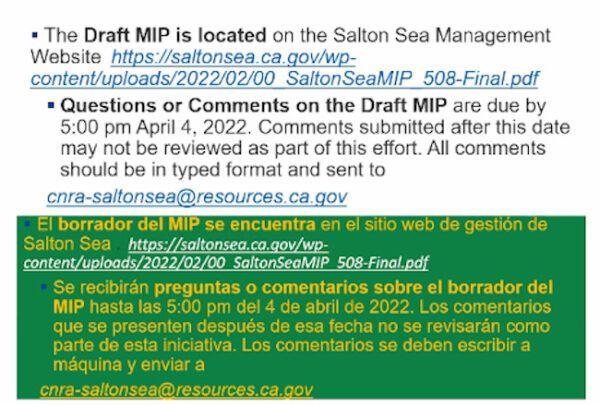 And, for lest we forget, the sea is vast and beautiful… 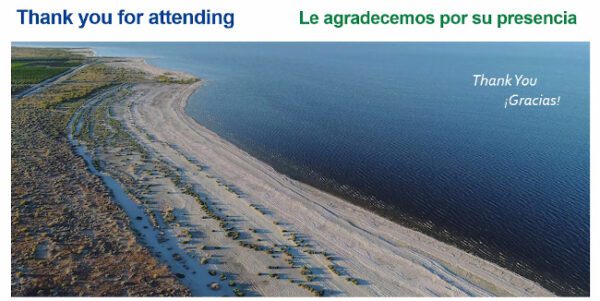 For information on the author, click sherylhamlin dot com

It makes no sense to destroy the Salton Sea for lithium batteries when there are numerous alternatives in the making. One alternative is graphene…

The other battery is safe, recyclable saline batteries…

Lithium is a short-term solution.

You should start your own saline battery company if its so obvious. Get rich. Would be a lot better than wasting your time typing crap into this Russian Propaganda rag. Or is it not so easy to make saline batteries out of the cesspool that is the Salton Sea after all???

Nevada us pushing for lithium mining too…

Residents in the area concerned…..not convinced….

State status report on mitigation measures. How can birds and mining coexist? That has yet to be determined…