The Worst Media Moments Of 2021 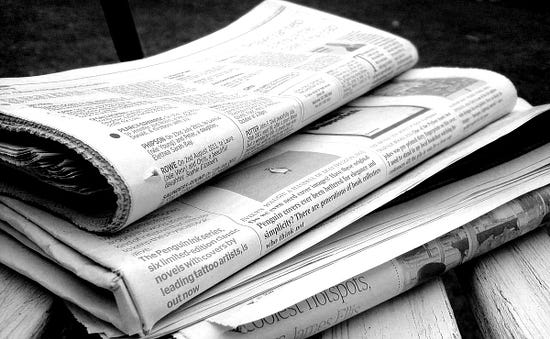 It was not a good year for the national press.

Indeed, if 2021 proved anything, it’s that corporate newsrooms are perfectly content to burp out the same nonsense, make the same mistakes, embrace the same ignorance, overlook the same ethical lapses, and parrot the same partisan talking points that have made them about as distrusted as Congress.

The following is a list of the worst major media moments of 2021. For brevity’s sake, the list has been narrowed to just nine examples. To include all errors, blunders, and acts of outright media malfeasance would require thousands of additional words.

In no particular order:

The Washington Post in November heavily amended roughly two years’ worth of reporting on the infamous Steele Dossier, an opposition research project that is almost certainly a work of total fiction if not outright Russian propaganda.

Don’t cheer. Had the Washington Post applied more scrutiny to its coverage of the dossier, especially its core claims with many that are absurd on their face, it wouldn’t have had to issue multiple corrections and editor’s notes. The dossier was a dubious piece of work from the get-go. The fact major newsrooms didn’t treat it as such is on them.

The since-amended Washington Post articles, some of which have had entire passages retracted, originally identified businessman Sergei Millian as a key source for the dossier.

However, it’s increasingly likely he played no role in the dossier’s creation. In fact, the source that fed the wildest and still-uncorroborated claims regarding then-GOP presidential nominee Donald Trump into the dossier was likely a Democratic Party operative with close ties to the Clinton 2016 presidential campaign.

The Washington Post’s corrections came after the Department of Justice indicted the dossier’s primary source, Igor Danchenko, who may or may not be in bed with Russian intelligence, on five counts of lying to federal investigators about how and where he got his supposed information.

Danchenko is accused specifically of fabricating his claim that he got some of his information from Millian.

In total, the Washington Post corrected and amended nearly a dozen separate stories.

No word yet on whether the paper plans to return the Pulitzer it won for its coverage of the Russian collusion dud, which includes the dossier.

CNN fired anchor Chris Cuomo in December after it was revealed he lied about the extent to which he worked behind the scenes to shield his brother, the disgraced former New York governor, from multiple allegations of sexual misconduct.

It’s a case of too little, too late. CNN should’ve fired Cuomo long ago for many separate ethical infractions.

Cuomo used CNN’s airwaves last year to stage a Lazarus-style resurrection in his home after he supposedly beat COVID-19, claiming his emergence from his basement marked the first time he left quarantine since contracting the virus. The entire stunt was a lie. Cuomo had already broken quarantine while supposedly sick with COVID-19.

Cuomo also transformed his evening program last year into his brother’s personal public relations shop amid the Empire State’s disastrous mishandling of its coronavirus response. This all happened within the context of former Gov. Andrew Cuomo quietly rerouting state resources to ensure Chris Cuomo and other family members were bumped to the front of the line for COVID-19 healthcare.

Then, there’s the fact CNN knew months before it fired Chris Cuomo that he had been working quietly as a spin doctor for the brother he promoted last year on the network’s airwaves.

Any of these episodes should’ve earned Chris Cuomo a pink slip from CNN. But the network didn’t fire him. It wasn’t until after the former anchor was found to have used his resources at CNN to dig up dirt on his brother’s accusers and warn his brother ahead of time about new sexual misconduct allegations and developments that the network decided it had enough.

Chris Cuomo, by the way, explicitly lied on-air about his efforts to protect his brother’s career.

There’s something to be said for “better later than never.” However, one can’t help but wonder, “What took so long?”

Honorable mention: MSNBC’s Katy Tur was discovered in December to have acted as an uncritical conduit for Andrew Cuomo’s office, repeating its spin “like verbatim” when news of the former governor’s sexual misconduct offenses first broke.

A jury found Kyle Rittenhouse not guilty in November on all charges related to the fatal shootings of two men last year during the Black Lives Matter riots in Kenosha, Wisconsin.

The 18-year-old Illinoisan, who maintains he acted in self-defense after rioters attacked him while he was protecting property in Kenosha, walked a free man despite the national press’s best efforts to tip the scales against him.

The national press papered over the circumstances of the Kenosha shootings, treating the destructive Black Lives Matter riots that ripped the city apart as a neutral backdrop. It denied there were riots. It argued the riots were good and justified. It even lionized the looters and the arsonists, most especially the men who were shot by Rittenhouse after they attacked him.

Major newsrooms omitted or buried exculpatory evidence from their coverage of the trial, including when Gaige Grosskreutz, who was also shot by Rittenhouse, testified he was shot only after he charged at Rittenhouse and pointed his gun at him.

An NBC News producer was even caught stalking members of the jury.

Luckily, for Rittenhouse, jurors were not so easily cowed by the press’s obvious efforts to browbeat them into handing down a “guilty” verdict.

When President Joe Biden’s nominee to the Office of the Comptroller of the Currency withdrew her nomination in December, the New York Times claimed it was because Republicans had made an issue of the fact she was born in the U.S.S.R.

Republicans lawmakers opposed Saule Omarova’s nomination to supervise an estimated 1,200 U.S. financial institutions because she wants to nationalize the banking system. They opposed her because she wants, according to her own words and policy papers, a complete federal takeover of all wages, gas, and food prices. They opposed her because she believes a single, unelected government bureaucracy should control all capital and credit.

Omarova’s on-the-record praise for Soviet economic policies and her stated desire to bankrupt the oil industry likely didn’t help, either.