On May 11, 2020, detectives from the Directed Enforcement Unit (DEU) concluded a firearm investigation after several months of intelligence gathering in collaboration with the Bureau of Alcohol, Tobacco, Firearms and Explosives (ATF) Los Angeles Field Division. DEU detectives seized over 30 firearms (see attached photo), including assault weapons, and arrested Joffred for a variety of weapons charges.

DEU detectives obtained information indicating Joffred was in possession of numerous illegal firearms after he had applied for a carried concealed weapons permit. During the investigation, detectives were able to confirm Joffred was in possession of numerous firearms while using an opiate based narcotic. Detectives subsequently obtained a signed search warrant for (S) Joshua Joffred, his vehicle and residence.

At about 1:30 p.m., DEU detectives contacted Joffred on a traffic stop near his residence in Newbury Park. During the service of the search warrant, a loaded handgun was found concealed in the center console of the vehicle. DEU detectives subsequently served the search warrant at the residence with the assistance of the Pharmaceutical Crimes Unit.

During the investigation, it was determined Joffred was addicted to an opiate based narcotic and therefore prohibited from owning, purchasing, receiving, or having in his possession or control any firearm.

The Directed Enforcement Unit (DEU) is made up of members of the Thousand Oaks Police Department. The mission of the unit is to conduct proactive policing utilizing various intelligence methods to reduce crime within the city of Thousand Oaks. 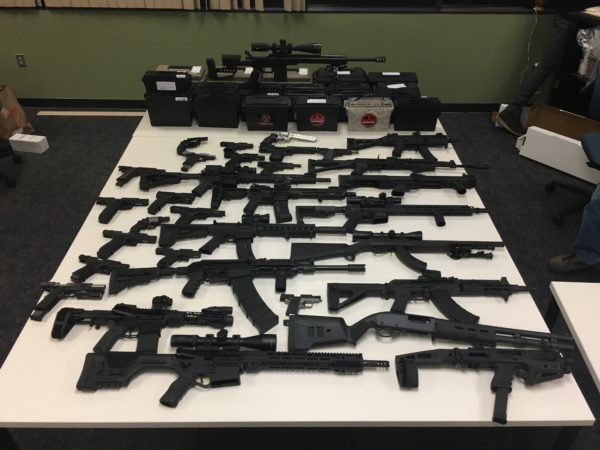 Wow, that’s a lot of firearms! I have friends that live in open-carry Arizona who would be asking what the heck this guy was thinking.