On December 5, 2019, Detectives from the Ventura County Sheriff’s Office Narcotics Street Team concluded a narcotics sales investigation into 26 year old Fredis Diaz of Thousand Oaks who was involved in the sales of narcotics to residents of Ventura County.

On December 5, 2019, Narcotics Detectives conducted an undercover operation targeting subjects involved in the sales of controlled substances in Ventura County. During the operation, detectives identified Fredis Diaz as a subject involved in the sale of controlled substances. Diaz communicated with an undercover detective and offered to sell the detective psilocybin mushrooms. Diaz offered and ultimately agreed to deliver the narcotics to the City of Moorpark. During the course of the investigation, patrol deputies assigned to the Moorpark Police Station contacted and detained Diaz in the area of High Street and Walnut Street. During a search of Diaz’ vehicle, detectives located two ounces of psilocybin mushrooms. Diaz was arrested and transported to the East Valley Jail for processing.

Following Diaz’ arrest, detectives authored and obtained a search warrant for his residence located in the 1300 Block of Hillcrest Drive in Thousand Oaks. During the service of the search warrant, detectives seized additional narcotics and paraphernalia indicative of narcotics sales. In all, detectives seized 910 grams of psilocybin mushrooms, 64 grams of concentrated cannabis, 90 grams of marijuana, an unregistered firearm and money believed to be proceeds from narcotics sales.

Psilocybin or “Magic Mushrooms” are dried or fresh hallucinogenic mushrooms. The compounds found in these mushrooms are a similar structure to lysergic acid diethylamide (LSD), and are abused for their hallucinogenic and euphoric effects. Psilocybin mushrooms are extremely dangerous and their use can lead to severe medical complications and even death.

The Narcotics Street Team is comprised of Narcotic Detectives from the Ventura County Sheriff’s Office and the Oxnard Police Department. 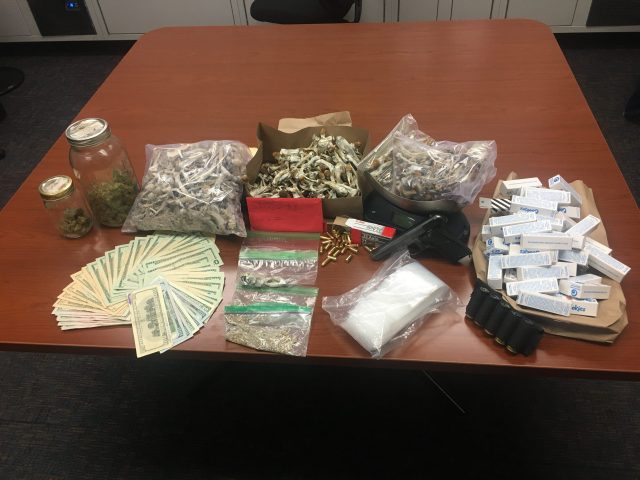 This is appalling journalism. Misinform the masses why don’t you! Psylocibin mushrooms have been scientifically proven to be the safest psychoactive drug you can consume, that including prescription drugs of course like amohetamines, opiates and benzos! The overconsumption may cause EGO DEATH but it it’s completely physically harmless! You’d need to eat enough to kill you from overeating before the mushrooms can kill you! Utterly terrible and propaganda journalism. DONT CARE IF YOU DONT BELIEVE ME! DO YOUR OWN RESEARCH!! THIS IS A HARMLESS FAMILY MAN BEHIND BARS! Hope you’re proud!! You shouldn’t go to jail over what Mother Nature gives us! This man is a hero!

Read it again. This is not “journalism” at all nor does it pretend to be.It is a press release from police.

We are told that the substance is currently illegal. Whether or not that is right or constitutional is another matter.