The California State Auditor released its analysis of fiscal health for 470 California cities, and the good news is that Thousand Oaks and Camarillo continue their streak as the healthiest ‘large’ cities in Ventura County when examined through the lens of long-term fiscal health.

The not so good news: The auditor found three Ventura County cities may be at “moderate to high risk” to cover rising pension and other post-employment benefit expenses, a condition that would worsen if a recession depresses tax revenues and decimates pension fund assets.
The California State Auditor’s Office selected a set of 10 indicators that enabled them to assess each city’s ability to pay its bills in both the short and long term. The indicators measure each city’s cash position or liquidity, debt burden, financial reserves, revenue trends, and ability to pay for employee retirement benefits.

And in trying to forecast how well cities can manage future pension costs, the state auditor pulled 5-year financial projections from CalPERS and found the cities of Oxnard, Ventura and Santa Paula are at high risk of not having enough funds to cover future pension payments, a situation that could result in reduced services and/or new taxes.
Since these figures largely reflect what cities owe their workers for pension and retiree health benefits that are guaranteed, but not funded, the heaviest burden tends to be a function of city age.

Older cities with their own police and or fire departments, like Oxnard and Ventura, are saddled with more unfunded debt — public safety pensions are the most expensive — than newer cities like Thousand Oaks and Camarillo, which contracts out for police and fire protection.

The state auditor ranked these three cities in the “moderate to high risk” category meaning in the event of a recession, they have a risk of experiencing fiscal distress as a result of insufficient general fund reserves; excessive pension costs relative to government wide revenue, a high debt burden and low revenue growth trends, the report said.

Oxnard and Santa Paula had the dubious honor of being ranked among the “worst” in the state for failure to set aside any funds to cover the cost of retiree health care benefits that workers have been promised.

2) On the Bubble: Ojai, Simi, and Fillmore

The auditor ranked these three cities as less at risk in the event of a recession, because they have adequate general fund reserves, a reasonable debt load and solid revenue trends. The state auditor noted concern however about the city of Simi Valley and its ability to pay future pension costs while fulfilling its promise to pay retiree health care benefits to workers.

These are numerical rankings for the ten Ventura County cities (from worst to best) based an analysis of 470 California cities: 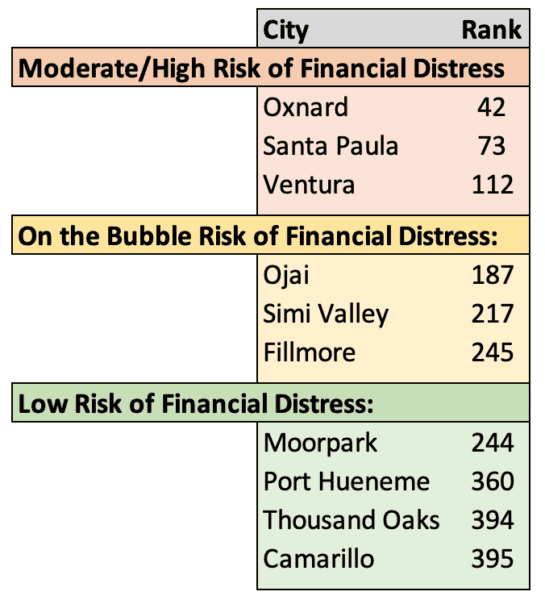 At the other end of the spectrum, the state auditor found these four cities have strong general fund balances, relatively low debt burdens combined with adequate pension and retiree health care funding, and, in the case of Thousand Oaks, above average revenue growth trends.
These are numerical rankings for the ten Ventura County cities (from worst to best) based an analysis of 470 California cities:
The state auditors’ findings should prompt serious financial discussions, especially in the three cities facing moderate to high financial risk. It’s up to residents, top city administrators and elected officials to figure out what to do about it.

You can view detailed audit findings for your city’s fiscal health at this link: