Train conductors encounter many strange and tragic situations in their line of duty. Sometimes, they go beyond the call of duty to avert a disaster. This conductor did just that.

Brad Slater is a train conductor for the Canadian National Railway Company. 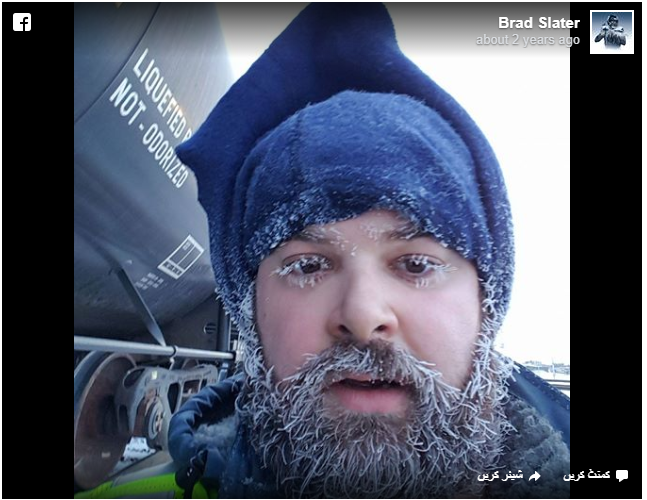 With the temperature a freezing -35 degrees Celsius (approx. -31 degrees Fahrenheit), Slater and train engineer William Munsey had the assignment of moving CN train Q199 from Wainwright to Edmonton in December 2016. They had a few minutes to wait, so Slater decided to do a walk by to just check that everything was in order.

The sounds he suddenly heard coming from underneath the second engine were bloodcurdling—so he called Munsey to come take a look. 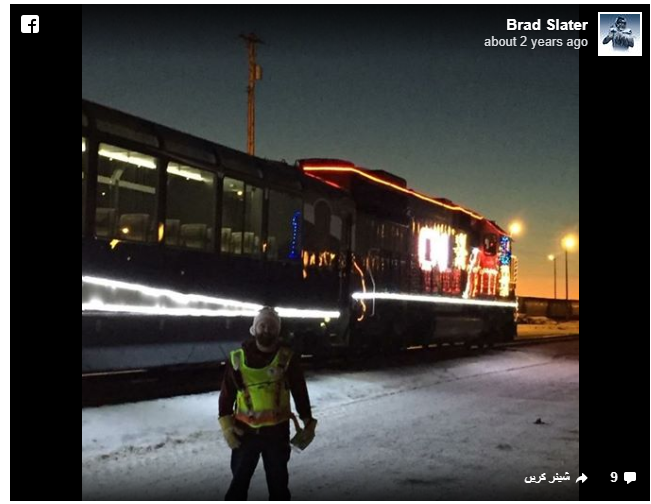 Munsey had a sinking feeling in his gut: “I thought the previous crew had run over somebody or he found an arm or leg or something. I’ve heard that voice before, and it’s not very good,” he said, according to CBC News.

Tentatively they approached, and to their surprise, and relief, there was an almost frozen cat curled up, still alive! It had survived an impossible journey through snow and freezing conditions underneath the engine.

“Sixty miles an hour at minus 39 is probably minus 55 to 60 and he went all the way from—for sure Saskatoon to Wainwright and … if I didn’t find him, he wouldn’t have made it to Irma, which was the next stop,” Slater told Global News. That is an incredible 200 miles the cat had traveled curled up on a steel ledge!

He remembers the cat’s plea for help, “All I heard was the angriest, saddest cat cry.”

The two then rescued the poor cat from beneath the engine and quickly warmed him up then offered him some food—which he spared no time in heartily gobbling down.

Slater decided to keep him in the train by his side, a decision that Munsey says saved the poor feline. 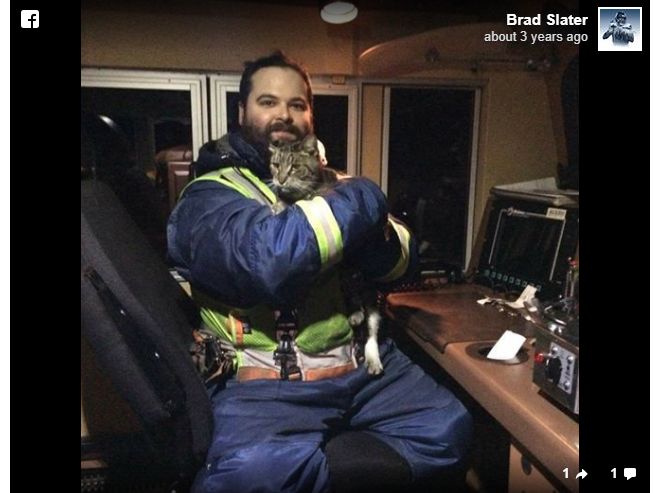 “Within five hours it was curled up on his lap—he was pushing his face against Slater’s arm. It was almost as if it knew how close it had been to dying and knew exactly which human had saved it,” said Munsey.

Slater named the cat Q199, after the train, and took him home with him. He had three cats then, and Q199 soon settled into life there. Slater had a sneaking suspicion that the cat was not just a stray and wanted to track his owner if possible. Someone out there could be pining for their lost cat.

Slater put his feelers out on social media and was contacted by a couple who live in Melville, Saskatchewan. They sent through some pictures of their missing cat called “Tiger,” which closely matched Q199 right down to the markings. 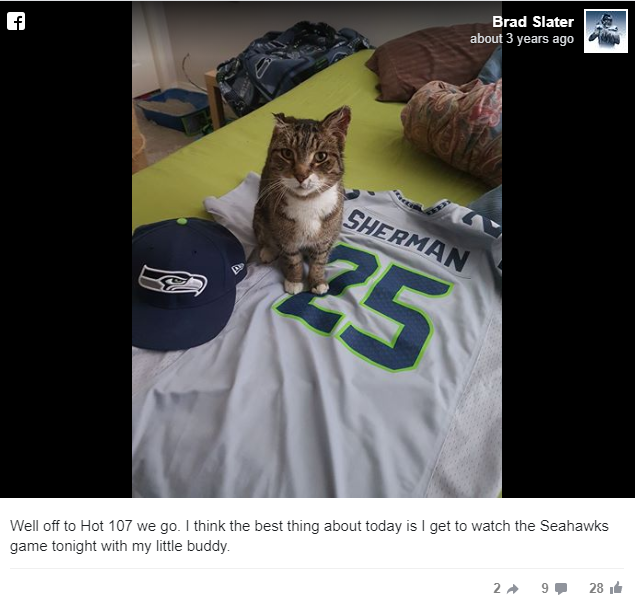 “As soon as I heard that, I broke down. At first, I wanted to keep denying it, trying to find a reason it wasn’t him, but I was seeing they were similar between the ear; his back leg is white,” said Slater.

Lyn Hahn, herself a former railway employee, came down to Edmonton a few days later.

“I was shaking and wondering what he would do. As soon as [Slater] started talking, I said ‘hello Tiger’ and he came straight away, started smelling me. I picked him up and was hugging him,” she said. 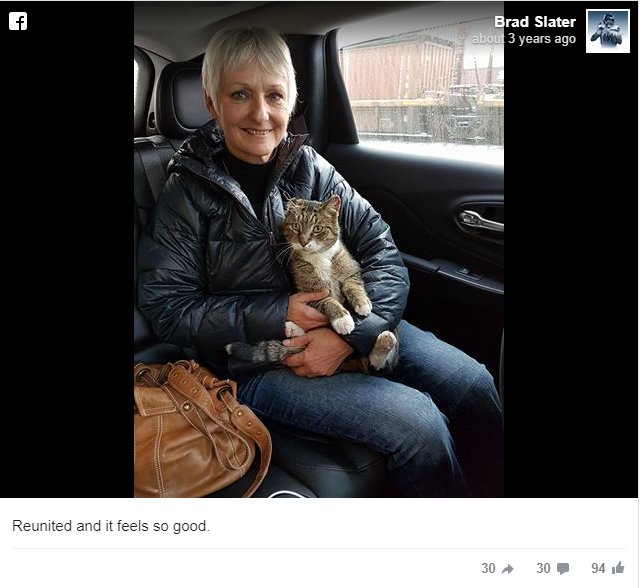 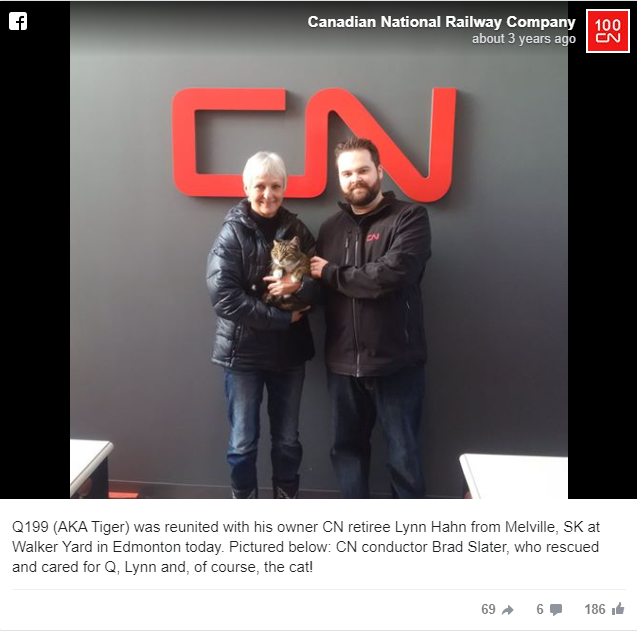 It was pretty exciting. [I] just couldn’t believe the story of the cat,” she said. She had immediately recognized him because of his floppy ear.

Slater had mixed feelings about Q199 leaving him, but he knew it was for the best. He formed a bond with Hahn, and the two have agreed to remain friends. 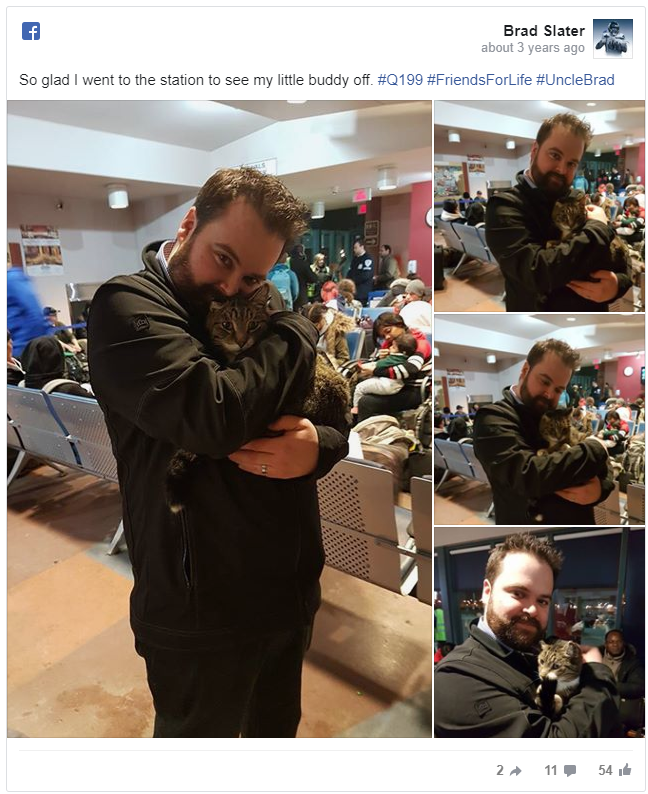 “We’re going to keep in contact. She’s going to send me pictures and videos. Uncle Brad is going to be around forever,” Slater said.

Slater’s good deed hasn’t gone unnoticed either. People for the Ethical Treatment of Animals (PETA) honored Brad with a Compassionate Action Award for his life-saving actions.

“Brad Slater did everything that he could to save this animal’s life,” Lisa Lange, PETA’s senior vice president, said. “PETA hopes his compassion will remind others that every life is precious and inspire them to act to help any animal in need.”

Though the incident occurred in 2016, this story still warms hearts. In a comment on a Facebook post by Munsey, Slater wrote: “Q199 is still doing just fine and is now avoiding all trains in Melville.”