Based on a reading of his latest amended motion, with supporting evidence, demanding an injunction on Georgia election certification, top flight attorney Lin Wood was not exaggerating when he said he had strong evidence that the Georgia election was flawed. Wood has won huge settlements for high school student Nicholas Sandmann, who was libeled by multiple MSM outlets. 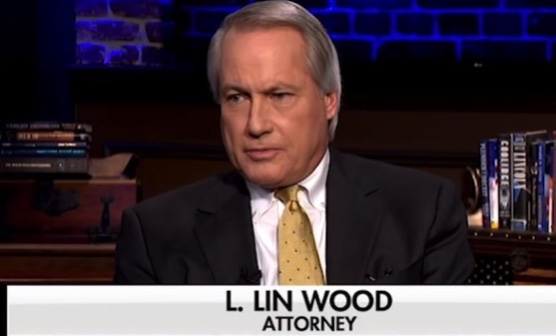 It is increasingly obvious that statements by officials and media that there are no problems, or only minor problems, with the Georgia election, are false.

Election observers and critics have identified a host of alleged problems with the Georgia election. They fell into the general categories of: errors, questionable regulations/procedures, not adhering to procedures, some being possible fraud.

Wood v GA S.O.S. Brad Reffensperger case Plaintiff/Attorney Lin Wood, a Georgia voter with standing to sue, asserts that Trump actually won by a landslide. He presents no quantifiable evidence so far to fully support that, but does have allegations that if added up and verified, could flip the state election over to Trump and some down ballot contests, too.

Reading the motion revealed a number of shocking alleged violations, many of which we had heard of before. But, these were supported by personal affidavits and research.

There were 11 affidavits provided claiming voting or recount irregularities.

Auditors and monitors Kelly Moore, Robin Hill, Scott Graham and others observed highly questionable absentee ballot handling at multiple voting centers where recounting was being done on 11-14 to 18, 2020. All observed stacks of absentee ballots that looked new, lacked folds/creases that would indicate they had been mailed and bore markings that looked too perfect, like they had been printed. Some observed slipshod attitudes, improper counting and other procedures, and lack of proper chain of custody of ballots. One experienced harassment from a paid supervisor, “Twyla.” One complained that she was only able to observe some activities up close. She said everyone seemed confident that there would be no changes to the counts.

Robin Hill wrote that she observed that a large quantity of ballots for Biden did not appear to have been mailed and looked to have pre-printed vote selections and that many boxes of ballots were 100% or nearly all for Biden.

In some cases, counting was already complete or nearly complete at the time monitors were told to show up. In some cases, what were supposed to be hand recounts were merely machine recounts.

Precinct SS02 A (A&B) Poll Manager Susan Voyles took an assignment as a paid auditor in the recount to work Nov. 14-18, 2020. She said many of the Fulton County employees assigned to work there at the Georgia World Congress Center in Atlanta had no experience working on elections.. She wrote: “The BOE did not appear to have standard operating procedures for the conduct of the audit. Everything was in total disarray. The organizers did not have sufficient tables for all the committed volunteers….”

This Epoch Times article worth reading-Georgia Recount Witnesses Saw Trump Votes Counted for Biden– dives deeper into the motion’s affidavits and exposes some disturbing allegations by observers/auditors on the front line of the Georgia recount effort.

Maybe coincidental, but we note in a separate Breitbart article: “Between September 1, 2020 and October 30, 2020, the CTCL (a Mark Zuckerberg of Facebook-funded outfit) contributed more than $16.6 million for “safe elections” in six Georgia counties, as Ballotpedia reported.”

There is much more. If you really want to see how bad it is:

I wonder why George Miller failed to mention that Lin Wood filed his Georgia lawsuits “under plenty of perjury” (attached for those of you disinclined to believe it).

George and Lin should at least try to be credible, or perhaps they presume their target audience doesn’t care to live in reality. Good news is the court system does and is unleashing its own fury on all the Kraken / Pillow / Four Seasons Landscaping lawyers. 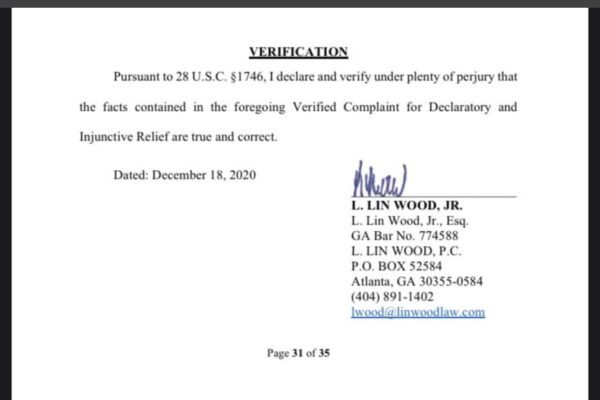