“It’s really critical for us to do what we can to help our students exercise their franchise,” Drake said. “We want to do all that we can to raise the understanding of the options that people have to vote, the places that they can vote and the obligation that we have to participate in our democracy.”

Said May: “At UC Davis, we are committed to making voting easy and accessible for today’s students who represent the future.”

The partnership was created to enhance and build off of the university’s UC Votes initiative to encourage student-voter participation. UC Davis had a strong student voter turnout in 2020 that officials hope to duplicate at all 10 UC campuses this year.

UC Davis, seeking to build on its momentum from 2020, has installed a voters box for students and other members of the community to submit ballots.

“The voting box that was set up here at UC Davis is a bedrock of democracy on this campus,” Weber said. “If you give up your vote, you’re probably giving it to somebody you don’t like. Your one vote is power.”

Support for this Sacramento OBSERVER article was provided to Word In Black (WIB) by the Chan Zuckerberg Initiative. WIB is a collaborative of 10 Black-owned media that includes print and digital partners.

Dignitaries from the state and the University of California on June 29 announced a partnership for increasing student participation in voting at UC campuses. 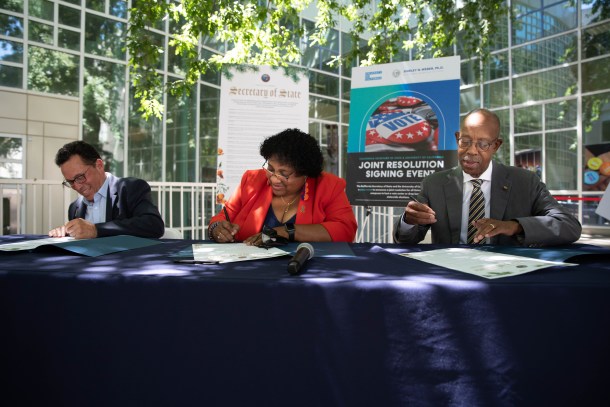 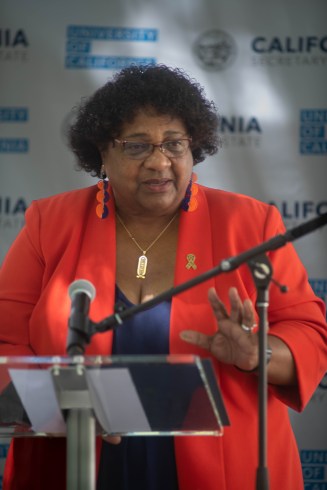 California Secretary of State Dr. Shirley N. Weber speaks to a crowd of students and reporters at the Shields Library at UC Davis. Robert Maryland, OBSERVER

These voting reforms are a good start, but we need far more reforms in addition to these. One voting reform we need is to change our system of determining the winner of elections when there are three or more candidates on the ballot, which occurs frequently in local elections such as City Council elections. We need to change to an advanced system where you are allowed to indicate your second and third choices, in addition to your first choice. This system is called “Ranked Choice Voting,” also known as “Instant Runoff Voting.” This system works great and empowers the voter, and promotes change. It is already in place in many states and cities in the U.S., including San Francisco, Berkeley, Palm Desert, and New York City. Learn more about voting reforms by searching for “Jeff Schwartz Thousand Oaks.”