Council Member Sobel asked for information about the organization. The council was told that the initial organization was formed in 1927 to preserve local water for local users. In the 1950’s, it became United Water Conservation District (UWCD) which was formed to build one or more dams and increase groundwater recharge. UWCD is a Public Agency operating under the Water Conservation Act of 1933.

Scheduled releases from the Piru Basin flow through the Fillmore Basin to the Santa Paula Basin, replenishing along the way. UWCD has two PhD’s who model water flows. 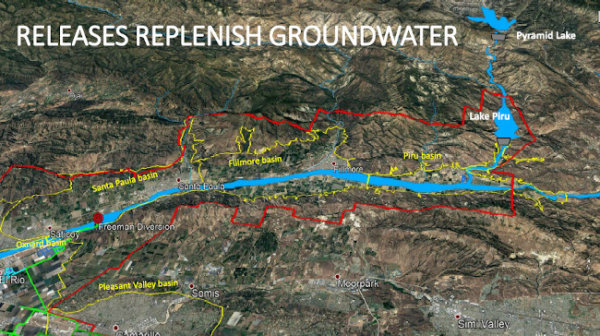 The Santa Felicia Dam which was built in the 1950’s is considered safe but potentiallfy hazardous because a spill could affect a populated area. There are two projects for this dam: 1) new spillway design required by the State of California and 2) a new outlet structure which terminates at the hydropower plant at the end of the outlet. The design for these projects is budgeted at $4 million with construction at $100 million. UWCD is looking for funding.

Joseph Jareb, CFO, explained that a new budget was developed based n the health crisis. The revenues current year are flat with a slight rate increase projected. Legal and Regulatory issues drove up expenditures by 10%. For example, the fish passage is $500,000 and $125,000 for quagga control. The Fish ladder model is $3.8 million with two versions required for study.. $11 million for Freeman Dam CIP is about 25% of CIP budget. As with most organizations, personnel costs are driven by pension costs. The new rate for Santa Paula is $172.50 af/y (acre foot per year) which represents an increase of $8.13 af/y.

Sheryl Hamlin asked via Zoom: United Water Conservation District recently won a grant for “Iron and Manganese Removal Project” from the State of California.Could you please explain more about the project and the process of obtaining this grant?

Answer: The project involves removing iron/manganese from constitents’ water including the Freeman Diversion to the EL Rio spreading Basin to the Oxnard Port Huenene system into the potable water system. The shallow aquifer must be blended before serving potable water. The grant came from Prop 1 IRWM Planning Grant. The grantee is the Water Shed Coalition of Ventura County who administers the funds. There were five awardees in the county among many competitors from Los Angeles. Santa Paula is a member. He would be glad to meet with Santa Paula staff to help submit any Santa Paula projects to the Water Shed Committee. Over $90 million in grants was awarded.

Finance Director Ramirez asked if the dam project was added to the city’s rates. Yes, he said, but not everything on the presentation today affects Santa Paula’s rates. Oxnard pumpers are primarily affected.

Answer: UWCD spends much time fighting people who would stop us from using water. Some would remove the Freeman dam. The dam safety project is huge. It is a continual fight. This year they are budgeting for lobbyists ($300,000) and public opinion monitoring ($375,000). They plan to study the effectiveness of this expenditure for a one year period.

There was a discussion from Finance Director Ramirez about rate volatility and the drastic difference between the agricultural rate and the rate for municipalities and industry. The volatility makes budgeting difficult. UWCD is aware of the volatile rates and has not found a solution. The rate differential between agriculture and M&I is a legislative issue. 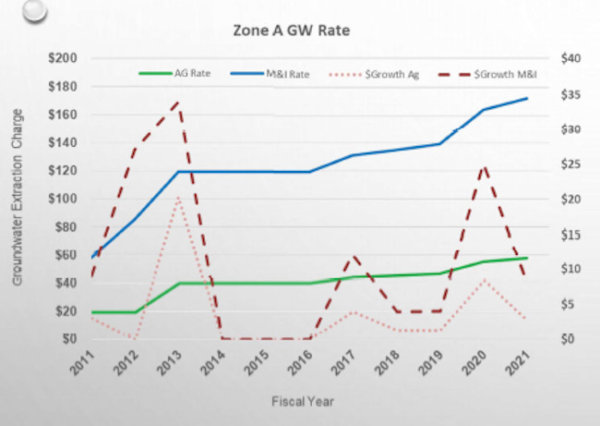 Because the UWCD presentation did not cover the rate effect on the Santa Paula budget, Director Ramirez created a chart showing the rate changes over time and the budgeted amount. Note that the city’s water usage changes each year too which affects the budget.