USDA Calls for Direct Payments to Farmers Hit by Pandemic

“We want to have direct payments to farmers, but more importantly, we want to purchase as much of this milk or other protein products, hams and pork products, and move them to where they can be utilized in our food banks and possibly even international humanitarian aid,” Perdue told the outlet.

Perdue’s comments to Fox follow an earlier statement when he said in a tweet that the USDA would be “using all financial resources we have been given to develop a program that will include direct payments to farmers & ranchers hurt by COVID-19.”

The direct payments are part of the Trump administration’s plan to help American farmers through an initial $15.5 billion effort, which is to include purchases of milk and meat.

The decision comes amid rising pressure from the U.S. farm lobby for government purchases as growers and ranchers struggle to get their goods to market because of disruptions caused by the pandemic, forcing some of them to throw out their supplies.

Perdue told Fox that scenes of dairy farmers dumping milk were due to challenges faced by processors as they pivot to retail, away from their usual customers in the food service industry, including restaurants and airlines, which have been hit hard by the pandemic.

“We worked as expeditiously as we could to get milk where it’s needed, obviously in our retail stores, so that’s what’s happening when you see milk being dumped,” Perdue told Fox. “It’s the processors not able to convert their lines into consumer-type packaging.” 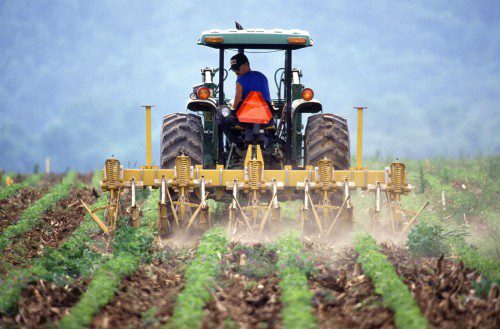 Meat supply chains have also been disrupted amid the pandemic, as a number of beef, pork, and poultry processing plants have shut down due to COVID-19 outbreaks among employees.

Pork giant Smithfield Foods, a wholly-owned subsidiary of Chinese company WH Group, closed down one of its plants in Sioux Falls, South Dakota, after dozens of workers daily were testing positive for the Chinese Communist Party (CCP) virus, commonly known as the novel coronavirus.

“The closure of this facility, combined with a growing list of other protein plants that have shuttered across our industry, is pushing our country perilously close to the edge in terms of our meat supply,” said Kenneth Sullivan, Smithfield CEO, in a statement.

“It is impossible to keep our grocery stores stocked if our plants are not running,” Sullivan added.

A number of industry analysts, in remarks to NPR, disputed the claim of a shortage in meat supply.

“I would say that there’s still a lot of meat on the market,” said Christine McCracken, senior director for animal protein at RaboResearch. “Quite a bit of meat, actually; pork, chicken and beef.”

On Tuesday, the National Pork Producers Council, which represents U.S. hog farmers, called on the administration to help by purchasing more than $1 billion in pork, and using it to supplement food bank programs facing increased demand due to rising unemployment.

The Council’s call would support the notion that, like dairy producers, meat processors face an oversupply amid a drop in demand from food service industry customers while facing difficulty adapting to increased demand from retail.

The head of Perdue Farms, a major producer of chicken products, told Good Morning America that while multiple plant shutdowns might cause some shortages, he said he had confidence in the adaptability of American food producers.

“We’ve also converted those plants that we did have that were geared toward restaurants to produce supermarket-package sized products to help supplement our other operations,” said Jim Perdue, Chairman of Perdue Farms.