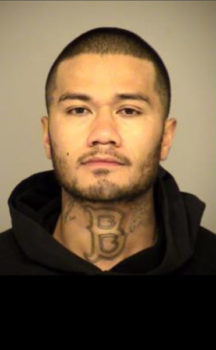 On 03/13/2020, the Sheriff’s Gang Unit concluded an investigation into the illegal firearm possession of a convicted felon, Seta Vui 29 year old Ventura resident. The Sheriff’s Gang Unit served a search warrant at Vui’s residence in the 1000 block of Saratoga Avenue in the City of Ventura, with the assistance of the Sheriff’s Post Release Offender Supervision (PROS) Unit.

Vui was arrested and booked at the Ventura County Main Jail for firearm related offenses. His bail was set at $750,000. Vui’s next scheduled court appearance is set for March 20th, 2020.

Anyone with further information regarding this investigation and/or any illegal firearm possession information is encouraged to contact the Ventura County Sheriff’s Gang Unit at 805-654-2856.