Concerned Ventura County parents are taking to the streets on October 15 2021 to protest mandated COVID-19 shots for school children. The protest will be held at the Ventura Unified School District office on Stanley in Ventura, CA 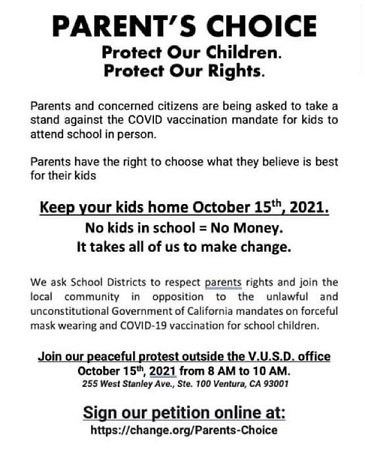 An added twist to the protest is organizers are advocating to remove your children from the school system for the day, to prevent your school district from collecting daily State funding which is calculated on classroom occupancy. A quick review of the cost to a school district determined that there is no quick way to determine how much it costs a school when a child stays away from school per day. Vague numbers range between $27 to $67 per day, but that is based on very weak reporting from the Mainstream news. Based on the minimum number of instructional days in California Public Schools being set at 180, the dollars lost due to one absence varies from $79.44 in the Santa Paula District to $55.30 in the Pleasant Valley District. Thank you, Tom!

Since 1998 California law has required a student be physically in class for a school district to receive reimbursing funds from the State Treasury. Excused or unexcused absences are not separated, and cost each school district regardless of the reason a child isn’t in attendance.

To be clear, the Parent’s Choice Protest is advocating that whether you come to the protest in Ventura or not, pulling your child from school that day will send a strong message to your school district that you do not approve of what is being taught to your children.

Due to the National School Board Association request for assistance with unruly parents at school board meetings, President Biden has put the Justice Department on the request by establishing a Task Force to look into school board violence. At approximately the same time as the parent outrage over Critical Race Theory and Progressive Sex Education in the classroom took hold, a meme has gone viral. Let’s Go Brandon was first coined by an inept ESPN reporter who was trying to throw shade on a chant that was floating across the airwaves while she was interviewing the winner of a NASCAR Crown Series winner, Brandon Brown.

Enterprising parents have made some interesting memes that embody the #FJB movement in a way that can empower any student. As a parent who wishes to remain anonymous stated, “These SCREAM make me a t-shirt, Man!”

Citizens Journal will report on the advertised peaceful protest at the VUSD protest. Anyone who would like to sign a protest petition in solidarity with parents in Ventura County can do so by contacting the organizers at http://change.org/parents-choice

Parents taking their kids out of government schools is half the battle.

The other half is to then homeschool them, or enroll them in private schools that teach American/Judeo-Christian values.

If it looks unaffordable, cut the family budget, sell what you do not need, dip into the kids’ inheritance, ask your parents/grandparents to help fund the education — or do all four.

An inheritance claimed by a ‘graduated’ adult child made to hate his or her parents and country is just wasted money. And wasted years.

Gene B.
Reply to  Mike Smith