“Our God is the God of life.  He made each one of us in the womb,” said Los Angeles Archbishop Jose Gomez at the Walk For Life Los Angeles rally on Saturday at LA Historic Park.  “The right to life is so essential.  Let’s go with Jesus as one family, serving His mission of love.”

The OneLIfe rally whose theme was:  One family—One mission; drew thousands of marchers walking one mile from La Placita at Olvera Street to LA Historic Park.  Here one of the featured speakers was Jess Echeverry, a rape victim at the age of 12 who once had an abortion and twice attempted suicide.  Echeverry spoke on “human dignity” which she says is fundamental in building a culture of life.  She finally came to understand that her unborn child had the same human dignity and need for love as she had. “If you know how much God loves you, then your job is to go out and love other people.  It’s your job to be a teacher—that is the challenge.”

“Jesus Christ informed people and changed how they thought.  He inspired people,” said Stephanie Gray, a pro-life speaker from Canada who has spoken 1,000 times around the world over two decades.  “Jesus gave us the best example.  He asked good questions, told good stories and was a living example.  We need to embrace the pro-life message and follow the example of Jesus.

“Science teaches us that a one-cell embryo is living.  It has human parents so it is human.  Love is the willingness to lay down one’s life for another.  Abortion is the opposite of great love.   We must follow the example of Jesus,” said Gray.

“Every person’s voice is powerful,” said Gia Chacon, who works as missions coordinator for Chesed for Humanity and serves as pro-life director advocating for family values within the Hispanic community for the nonprofit Bienvenido.    “I encourage people to know the power of their voice—you never know your own ability to impact society, to impact one individual.  You never know what God has in store for you, and how He might use your voice to save someone’s life.”

Emcees of the OneLife LA 2020 rally were JC Cuevas, a radio personality with a weekend show on more than 50 stations within the United States and Marcela Luevanos, with over 17 years experience in radio broadcasting and currently working at 103.1, a Mexican radio station in the High Desert.  “We are all one, from lots of races all over Southern California,” said Luevanos.

Featured at the youth/young adult rally which kicked off Saturday at La Placita (Olvera Street) was Francis Cabildo; as well as Gia Chacon and AJ Casillas as speakers.  “I’m very grateful for my mom and dad’s complete reliance and faith in the Lord,” said AJ Casillas, who said that when his mother was pregnant with him, her doctors noticed signs of dwarfism and wanted to conduct further tests to see “If this is a pregnancy that you’d want to keep?”   His parents refused and his mom said:  “My child is my child regardless of how he comes out.”

The event concluded with a Requiem Mass for the Unborn at the Cathedral of Our Lady of the Angels and a young adult after-party at Union Station. In promoting the event, Archbishop Gomez said:  “OneLife LA is more than one beautiful day.  OneLife LA is our vision for a new way of life.  The vision for society as God wants it to be,” said Archbishop Gomez.  “The mission of OneLife LA is to unite communities and inspire positive action…(by promoting) the beauty and dignity of every human life from conception to natural death.”

Event partners included those who feed the homeless, liberate trafficking victims, find adoptive families for foster children, provide life-affirming services for pregnant women and those who accompany the dying through their final days.

The first OneLife event brought together 15,000 people in 2015.  Nick Vujicic from Life without Limbs was featured speaker in 2016 which was attended by 20,000.   Some 25,000 attended in 2018.  The Los Angeles Archdiocese’s Office of Life, Justice and Peace spearheads OneLife LA.

Also participating in the OneLife rally was a bus from Moorpark and from Simi Valley.  The Oxnard pro-lifers heard a personal pro-life testimony on their bus ride from Denise Pedrow, candidate for California State Assembly 44th district, who said she had an abortion when she was unmarried and living a rebellious lifestyle.  “Now, I have been married 25 years; have one daughter and have raised three stepsons.  I believe in the sanctity of life—that it a child in the womb and you don’t stop a beating heart.”

Meanwhile, Andy Caldwell, candidate for California’s 24th Congressional District (Santa Barbara and San Luis Obispo County) was a speaker at Santa Maria’s Walk for Life on Saturday.  Caldwell is married and has seven children (six girls and one boy).

Nationwide pro-life events were kicked off with March for Life Chicago 2020 held Jan. 10-11.   President Donald J. Trump issued a proclamation on Religious Freedom Day on Thursday, January 16th in which he said: “We reaffirm our commitment to protecting the precious and fundamental right of religious freedom, both at home and abroad.  Our Founders entrusted the American people with a responsibility to protect religious liberty so that our Nation may stand as a bright beacon or the rest of the world.”

The eighth annual San Diego Walk for Life was also held on Saturday, Jan. 18th at Balboa Park from 8:30 p.m. to 12 noon.  A Dallas pro-life event was also held Saturday.

Atlanta is the site of a march expecting 1,000 on Wednesday, Jan. 22 with a march occurring in Lake Charles, Louisiana on the same day with five other marches planned in Louisiana on different days through Feb. 1.  The Issues 4 Life rally sponsored by Walter B. Hoye II is to be held on Friday, Jan. 24th from 12-2 p.m. at the Oakland City Hall.  The 16th annual Walk for Life West Coast rally starting at 12:30 p.m. is planned on Saturday, Jan. 25th at San Francisco’s Civic Center Plaza and walking two miles to Embarcadero Plaza.  Austin, Texas is the site of a March for Life on Saturday, Jan. 25 with between 10-15,000 expected.

A Washington D.C. March for Life conference (morning) and youth rally (afternoon) will be held on Thursday, Jan. 23rd and the nation’s oldest pro-life rally is the 47th annual National March for Life sponsored by The March for Life Education and Defense Fund held in Washington D.C on Friday, Jan. 24th starting at 12 noon and featuring First Lady of Louisiana Donna Hutto Edwards and Rep. Steve Scalise (R-LA).  The theme is:  Life Empowers:  Pro-Life is Pro-Woman.  Other speakers include:  Jim Daly, President of Focus on the Family; Marjorie Dannenfelser, President of Susan B. Anthony List; Elisa Martinez, founder of New Mexico Alliance for Life; and Rep. Chris Smith (R-NJ). 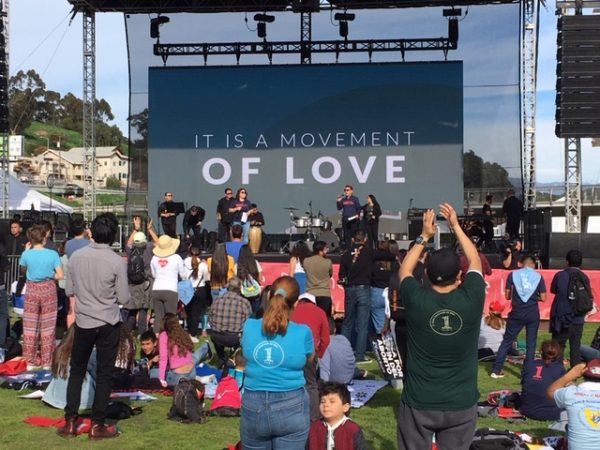 Michael Hernandez, Co-Founder of the Citizens Journal—Ventura County’s online news service; editor of the History Makers Report and founder of History Makers International—a community nonprofit serving youth and families in Ventura County, is a former Southern California daily newspaper journalist and religion and news editor. He has worked 25 years as a middle school teacher in Monrovia and Los Angeles Unified School Districts. Mr. Hernandez can be contacted by email at [email protected]