VENTURA—Godspeak Calvary Pastor Rob McCoy of Newbury Park announced during a three minute Fireside Chat message today (from his 56th birthday celebration in Westlake) that Ventura County was pursuing a contempt citation against him and the church with the intention of citing congregants and making sure that Ventura County Sheriff would enter and close the church from meeting on Sunday. The action was led by Thousand Oaks Supervisor Linda Parks, who was joined by Ventura County Board of Supervisors John Zaragoza and Steve Bennett last week.  (Editor’s Note: To see Pastor McCoy’s message go to:  https://www.youtube.com/watch?v=ZHFdx1-qhKQ.)

“This is draconian rules by elitists who don’t care about the populace,” said Godspeak Pastor McCoy. “These actions are vindictive” to a church that has seen zero COVID-19 cases. “We fight for liberty.”

The Ventura County Board of Supervisors sought and received a 22-day temporary restraining order last Friday (Aug. 6) against Godspeak Calvary with Judge Guasco saying during the one-hour hearing: “There is no exercise of a right unless people are alive to exercise it” while ignoring arguments of the actual COVID-19 health data in Ventura County made by Godspeak Attorney Robert H. Tyler with a five-page letter sent to Ventura County Public Health Director Rigoberto Vargas on July 27.

The Superior Court order issued last Friday lasts until Aug. 31 when another hearing is set on whether the order should be replaced with a preliminary injunction that could last for months or could simply expire. 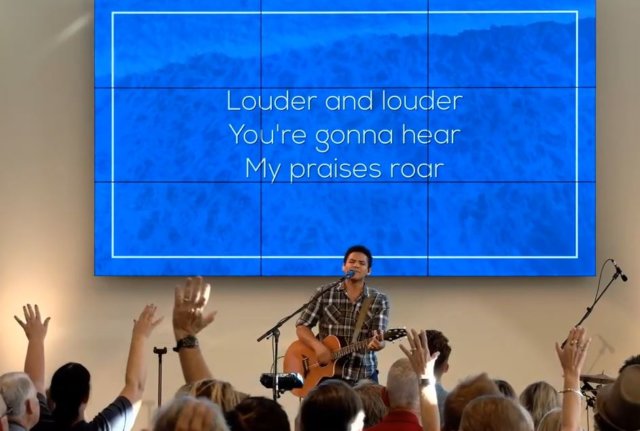 Our libertys do not expire based on a dictate. Governors and health directors cannot ‘order” as to law. Only ‘ elected representatives” Basic framework of our Constitution Article #1 ( AKA ‘our contract of government). Our ‘rights are NOT in an way ‘optional”. If you want to argue against that then there is no limit as to what the govt can do. You have no ‘ rights” as to ‘equal protection” “due Process” “right to an attorney” “right to remain silent”. Either they are rights or they are not. You wanna tell me? Suppose you volunteer” to lose your ‘right’ of due process”? I’m waiting….

John, Krissy and Sue…who are you voting for this year for President? Just curious. This will help frame-up all we need to know about your reply’s here.

Theres the proof Dan. You guys see the pandemic as a political issue. And not a scientific one.

For your information last time I voted for Trump.

It seems highly unlikely you voted for Trump, given your past posts.

Its true. You don’t have to be scientifically illiterate to support Trump.

Will I actually vote for him again? We will have to see. Plenty of scientists support Trump while disagreeing with him on some issues. They just see him as a lessor of two evils. His opponent last time was Hillary – a person I just cannot stand.

And a lot of his stupid stuff he says he doesn’t really believe – he is just trying to attract a sliver of a segment of a certain vote. In the case of Covid for example- the poorly educated vote.

I am a Trump supporter.

This is about our First Amendment rights. Our leaders allow protests and riots but not religious gatherings. They have no right to tell us we can’t go to church or to sing. There’s a 99 percent survival rate with this virus. We shouldn’t even be shut down. We hurting far more people with this shutdown than we are helping. Our leaders our a bunch of communists.

Learn more about the Constitution Chris. Actually read it all the way through Rather than listen to Rush Limbaughs translation of it.

Also read up on communism. Learn what the difference is between communists and our leaders.

Thought and prayers for those whose God resides only at an address in Newbury Park and not in nature or their hearts.

Legally they have every right to enforce and seem to be taking the steps toward that. The pastor is a grandstander looking for attention to make a point about something I just see as manipulation of his flock, former political standing. Ignore him and his mostly new followers

Lets do the math. 1 percent of Ventura County residents have been infected with Covid-19 so far. According to McCoy he has 1500 attendess. That means 15 people have been or will become infected based on the averages so far. Thats a minimum. If it breaks out in the church he will have hundreds infected.

Its simple. When you violate a court order and flaunt it while doing so bad things happen. To anybody doing it, not just churches. McCoy brought this on himself. He could have held services outside. He lied when he said he needed a park that held 1500 people. He only needs space for 400 people. Since he holds three morning services and could do the same outside.