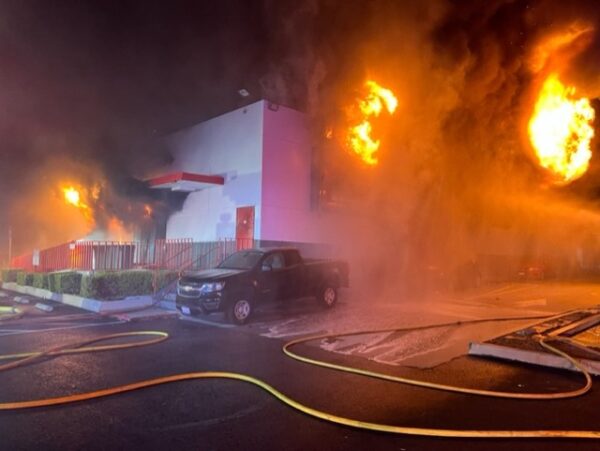 On May 9th at 11:47pm, the Ventura County Fire Communication Center received a call from the Ventura Police Department of a commercial building on fire. Fire personnel arrived on scene within minutes of the initial call and found a large 75’ x 150’ single story commercial building with a large amount of smoke and flames coming from the rear of the building.

Firefighters knocked down and extinguished the fire within the first 3 hours of the initial 911 call. A primary/secondary search of the building were attempted but hampered due to the structural integrity of the building, however the building was confirmed vacant
by the business owner.

The integrity of the building was compromised due to the heavy fire conditions and a safety collapse zone was created around the building.

The Incident Commander coordinated with the owner of the building and various supportive resources to determine the final disposition of the involved structure. No injuries were reported at the time of the incident and the estimated damage and content loss of the building is pending further investigation. The cause of the fire remains under investigation.

The Ventura City Fire Department would like to remind all business owners to ensure that they have working smoke and carbon monoxide detectors in addition to having an effective evacuation plan.