On December 3, 2020, Detectives from the Ventura County Sheriff’s Office Narcotics Street Team concluded a narcotics sales investigation and arrested Megan Thompson and Christian Gutierrez for narcotics sales and possession of an illegal firearm.

During the last week of November 2020, a deputy assigned to the Pre-Trial Detention Facility worked diligently to obtain information related to the sales of narcotics and the possession of illegal firearms taking place at the Vagabond Inn located in the 700 Block of East Thompson Boulevard in the City of Ventura. The deputy obtained detailed information and provided it to the Narcotics Street Team for follow up.

On December 3, 2020, detectives conducted follow up and were able to identify Megan Thompson and Christian Gutierrez as being associated to a specific room at the hotel. Detectives found Thompson and Gutierrez were both on active Ventura County probation with search terms. During the investigation, detectives contacted Gutierrez as he exited the hotel room. Gutierrez attempted to flee, but was apprehended and searched pursuant to the terms of his probation. Gutierrez was found to be in possession of a loaded 9mm firearm concealed in a holster in his waistband. The firearm did not have a serial number and was not lawfully registered. Gutierrez has previous felony convictions that prohibit him from owning and or possessing any firearms or ammunition. Gutierrez was arrested for various firearms charges.

After arresting Gutierrez, detectives contacted Thompson inside her room and conducted a search of her room pursuant to the terms of her probation. Detectives seized methamphetamine packaged for sale and other evidence indicative of narcotics sales. Based on the investigation, Thompson was arrested for possession for sales of methamphetamine.

Both Thompson and Gutierrez were transported and booked at the Pre-Trial Detention Facility and are awaiting court proceedings. 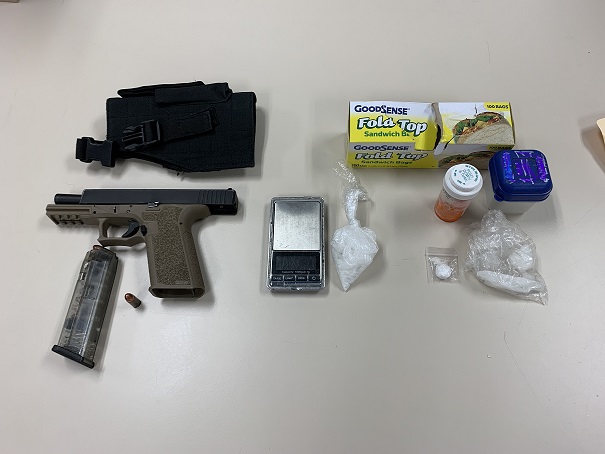