Ventura Police See a Significant Decrease in Part I Crimes

Property Crime dropped by 15.3%, with reductions in every category when compared to 2018. Burglary dropped by 26.6%, with a 31.8% reduction in commercial burglaries and a 20.1% reduction in residential burglaries. Arson showed the greatest reduction, with 25 fewer arsons reported. Larceny and vehicle theft both saw large reductions of 11.4% and 24.2% respectively.

Despite the significant overall reduction in Part I Crime, violent crime saw a slight increase of 2.9% in 2019, with 13 more offenses reported than in the previous year. Aggravated assault increased 7.7%, with 21 more assaults being reported. Sexual assaults increased by 2 offenses and homicides increased by 1. Robberies accounted for the only reduction in this category, with a reduction of 9.4%, or 11 offenses.

Although the annual crime rate fluctuates slightly from one year to the next, Ventura’s Part I Crime Rate has been on a steady decline since 2015, with 2019 being the lowest report- ed in the last 20 years.

“Additional staffing enhancements, made possible by Measure O and approved by the Ventura City Council, have created the capacity for an enhanced focus on some of the most prolific criminal offenders,” said Ventura Police Chief Darin Schindler. “Increased uniformed patrols in public spaces, along with a fully staffed Neighborhood Narcotics and Property Crime Reduction Team have likely contributed to the City’s significant drop in property crime.” 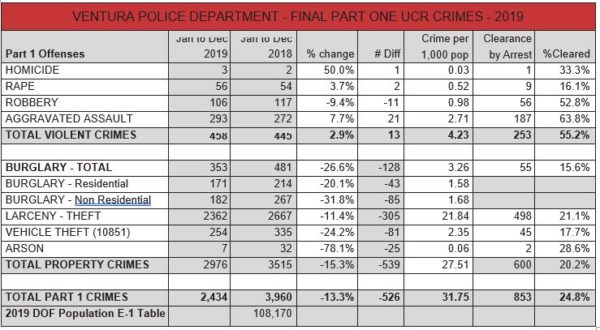