What a Difference a Day Makes- VC Re-Opens Parks

Oxnard, CA- The county re-evaluated  its pandemic safety policies and evidently concluded that closing parks was no longer the best strategy. So they were officially re-opened Friday evening, April 17 at 5 pm. County of Ventura Public Health Officer, Doctor Robert Levin announced a new safety order (link below). The changes, mostly loosening up areas in ways which would probably not significantly increase risk, are subject to review and rescission if they don’t work out, based upon new infection data. But all of these are dependent on how well/safely the public carries them out. 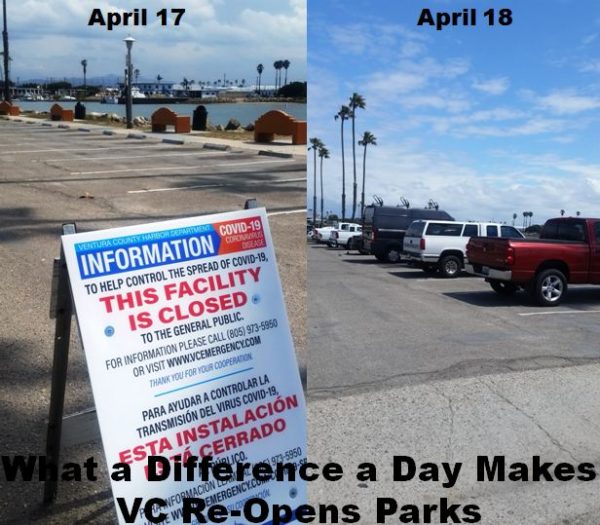 We saw for ourselves and heard reports of higher traffic in parks/beaches on Saturday, but social distancing was followed very well by nearly everyone. Many were even wearing masks, which doesn’t seem necessary outdoors with good social distancing.

The few exceptions we saw were almost entirely younger people…. Several obviously unrelated people crammed together on a park bench…. small groups in tet-a-tets …a group of people on a Channel Islands Harbor greenbelt, talking while socially distanced, but with 5 or 6 dogs playing, brushing by them, colliding with other dogs and… well you get the picture.  These are all risky situations which could roll back the progress made in this critical period. I have read accounts of some young people who think they are immune to this thing. While less likely to die, they are far from impervious to it and can also easily spread infection to the more vulnerable. Clearly more education/motivation is needed here.

Where there were less than a hundred people on a three mile stretch of beach that we frequent, even at the busiest times last week, there were at least three times as many on Saturday, but it was still very uncrowded and manageable. Those and the people surfing might have been arrested if they were doing that in LA, SD or SB counties. People gave each other a very wide berth when walking by, often joking about it.

VENTURA, CA. – County of Ventura Public Health Officer, Doctor Robert Levin, has announced the extension and modification of the Stay Well At Home Order. The Order is in effect as of April 18 at 11:59 pm and shall be in effect until 11:59 pm on May 15, 2020. “It’s understandable that our community members want […]

Politicians and Health Care Bureaucrats: You Have No Idea What You’ve Done on COVID-19

Selective Re-Opening of the Economy Urgently Needed Along With Fighting the Virus By George Miller Policy-making politicians, health care bureaucrats: you have no idea what new problems you’ve created while attempting to address the COVID-19 threat. Conceivably, the harm you’ve done could be worse than the good- by far. Don’t get me wrong- […]