What Is Money, Anyway?

One of the most important aspects of economics that people should understand better is money. Recall your first paycheck, not an allowance for chores around the home, but for real work where you risked losing that employment.

For our purposes – and perhaps for cultural anthropologists, since they gather data about such things – I will use my first experience earning money outside the home as an example. That job, now over half a century ago, was moving irrigation pipe so people could eat Idaho potatoes. Those were, however, not my thoughts at the time – I just wanted money for clothes and school supplies.

Hold that thought for a bit and consider Pink Floyd’s song, Money, written by Roger Waters in 1973. In the official music video, we see dozens of images which combined with the lyrics, all of which seem designed to portray money as a very negative and dark influence on society. Those images include:

The video ends with a scene of paper money incineration, reminiscent of the German experience with hyperinflation, seemingly implying we should abandon its use.

One stanza of the song’s lyrics reflect a still broadly popular perception of money:

Money, so they say

Is the root of all evil today

Is money the root of all evil? In context, the source of that sentiment originating over 2,000 years ago, says it’s the Love of money (mostly envy or greed), not the money itself, that is evil. Perhaps the real evil is not understanding what money is. What if, instead of evil, money represents the product of virtue (behavior showing high moral standards), the creation of the best within you (not what’s the least you can do to keep your job), a token of honor (for performance at a level that brings respect), and a statement of hope (not only in yourself, but in others, that they will behave similarly and also provide quality products and service)? To explore such thoughts further, see Francisco d’Anconia’s Speech on Money from Atlas Shrugged.

When you accept money in payment for your effort, you do so only on the conviction that you will exchange it for the product of the effort of others. While generally true in all employment relationships, a clear illustration of that conviction and its requirements occur in the case of the self-employed who provide services for their customers. Circumstances always vary, but generally as each job ends, the next comes largely through the previous provision of quality work and a good reputation.

Rather than it being evil, it should deserve respect since it lays claim to the production of goods and services that do not yet exist.

Even more boldly, when earned non-fraudulently, money represents a debt society owes you.

Throughout the history of money usage, and in its usage today, money has assumed different forms and continues to evolve. Economists point to barter as an early but unsuccessful practice between groups of people, mainly due to the impractical nature of the double coincidence of wants as communities increased in size. Locke, in his Second Treatise of Government points to the use of commodity money, such as gold or silver, that has common or intrinsic value unrelated to its monetary value, to fulfill those and the other functions of money mentioned in the next paragraph. Locke also seems to have anticipated an interesting modern argument between anthropologists who push back against the existence of barter economies arguing that credit money (getting something now and owing something later) came first without the existence of barter. Some argue this pushback comes with the desire to frame money as evil by conflating its use in valuing things with its misuse by those who possess it in terms of valuing or putting worth on people. (See The Myth of the Barter Economy for that view and see The Myth of the Myth of Barter for George Selgin’s rebuttal.)

Today we use fiat money, issued by governments, and declared money by law. In the U.S., people both point to, and question, its legitimacy by turning to Section 8, Clause 5 of the Constitution. The argument that money represents a debt society owes you is that by providing productive efforts of value to someone else, who has produced nothing you currently need, you can accept money in exchange and then lay claim to someone else’s productive efforts at another place and time. Seen this way, money satisfies at least four functions: medium of exchange, store of value, unit of account, and a standard of deferred payment.

So understood, the moral issue surrounding money being evil becomes, “Is money justly acquired?” When we provide goods and services at an agreed price, do we deliver everything the customer bargained for, the best we have to offer, no corners cut? Providing less than that would be fraudulent and unjust behavior. Acquiring money through unjust means is where the evil arises.

If we stipulate that when earned non-fraudulently, money does represent a debt society owes you, what are the implications for money that is unearned? What if it’s gifted (transferred) by those who produced something for it? What if it is otherwise transferred (say by a third party), with our consent? What if it’s without our consent? What if it’s printed? Is printed money that represents no past production earned or counterfeit? Can it be both? What production occurs with the alleyway theft that leaves a thief with more money? Is that money morally real or counterfeit? 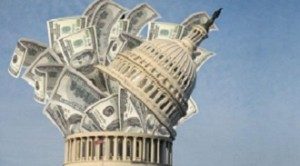 Perhaps every person of great achievement, every entrepreneur, every politician, and so forth has a dark side, some likely darker than others. Setting that aside, our nation and our world have seen some pretty amazing entrepreneurs.

One, whose parents put him up for adoption at birth, died a multi-billionaire. By producing a lot of useful things, he had a net worth of more than $1 million by 1978, when he was just 23. A year later, a net worth of $10 million and a year after that, $250 million. He did that by producing things people valued, who produced nothing of significant enough value that an equal exchange could be made. He gave people things of sufficient and significant enough value that they were excited, gave him money, and told their friends, who then also came and gave him money that he could use to lay claim to the efforts of other people down the road. In the end, he died gifting, leaving over $10 billion behind, and in the meantime, among other things, we’ve had Pixar, and, oh yes, iPhones.

To bring things full circle, that farmer had no clothes or school supplies I was interested in, but I accepted his money and together our efforts provided potatoes for other people. David Gillette is a Professor of Economics at Truman State University, the recipient of the Missouri Governor’s Award for Excellence in Teaching, and Truman’s student sponsored Educator of Year award. He regularly coordinates a speaker series and readings groups where students explore areas of interest not addressed in the mainstream economics curriculum.

His research focuses on pedagogy, particularly in economics. He has published such work in The American Economist, Teaching of Psychology, Jossey-Bass, New Directions for Teaching and Learning, and has forthcoming articles in the Journal for Economic Educators, and the Journal of Economics and Finance Education.