States across the country are debating and implementing Just Energy Transition (JET) funds to pay communities affected by the closure of a power plant as the country transitions to “green” energy.

Think of the community who has depended on a large industry for decades which shutters a plant. Jobs lost, schools close, service decrease, people relocate to find jobs and municipal budgets stressed.

In California, all nuclear power plants are scheduled to close, but the state created a trust fund for each plant when each plant was built based on the useful life of the plant into which ratepayers paid a small amount for the life of the plant. The Nuclear Decommissioning Trust Funds now have $5.2 billion invested to compensate the affected communities. Read about these trust funds here and the affected plants.

…Since 2007, 11 in-state coal-fired plants retired (370 MW), and 3 converted to biomass fuel (132 MW). With the retirement of the 108 MW ACE Cogeneration plant in 2014, the last remaining coal-fired power plant in California is the 63 MW Argus Cogen plant.4 Both plants are located in Trona, San Bernardino County… source

Coal Plants in the South West and Closing Legislation

The map below presented by Karen Potter of SWEEP Southwest Energy Efficient Project during the January 6, 2022 Arizona Corporation Commission (AZCC) meeting showed the six southwestern states who have legislation for coal plant closure. 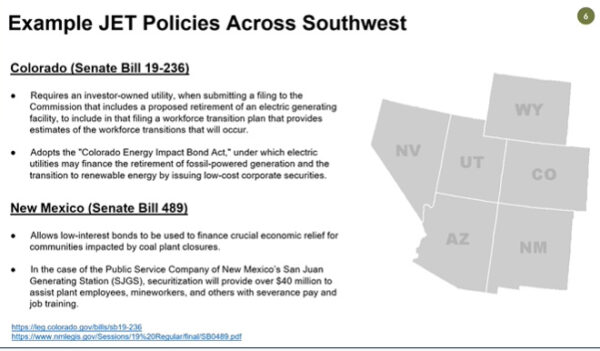 The AZCC, a powerful commission with over 200 employees and a broad range of powers, initiated a rate review of APS in 2019. The case documents are posted here. As part of this process, it was agreed that staff and stakeholders would work together to resolve issues of funding the decommissioning of the coal plants. APS had provided information in an earlier report about the decommissioning costs as follows: Four Corners $55 million, Saguaro $9 million, Ocotillo ($8.4) and Cholla (8.2 million). source

In a historic agreement, the sum of $144 million would be distributed to the communities affected by these closures. Most of these communities are Native American whose lands and waters have been used without compensation by the plants for decades according to activist and lifeline resident Nicole Horseherder, who was featured in Time Magazine. Ms. Horseherder, who spoke at the January 6, 2022 meeting, said the APS case had provided a transition plan and questioned why the AZCC was asking for the same data again which would delay the plan. She stressed how the groundwater had been used and depleted for generations without compensation.

Anticipating a decade or more of transition, ASU created the JET Center, a think tank of experts providing expertise on the transition communities and hard assets of coal towns.

The Debate: Who Pays?

The initial AZCC decision in the APS rate case crafted an amount which APS would generate partially from a rate increase and partially from stockholders in terms of a lower ROI. This case is still open.

Commissioner O’Conner reported that the State of Arizona will announce a $3 billion surplus on Monday, January 10, 2022. Commissioner O’Conner suggested the AZCC write a letter signed by all supporting a request for the State of Arizona to provide some or all of this funding, because he felt the whole state benefitted from the coal plants and not just the ratepayers and stockholders. Chair Márquez said she would write such a letter and agendize it for discussion at the next open staff meeting.

Eric Frankowski, Executive Director of the Western Energy Clean Energy Corporation, said that this discussion should have been completed a year ago. He monitors the AZCC regularly. Here is a report from a previous meeting where the same issues were discussed a year ago. He disagrees with Commission O’Conner saying the utility companies have benefitted greatly.

BBB to the Rescue?

Several speakers suggested the Federal Intrastructure Bill (aka “BBB”) could be tapped for such funds; however, this could take years to work through the process.

The Federal Government is looking at revitalizing communities hurt by plant closures with the creation of a new committee. The formation announcement was reported here with A Readout of Investment Roundtable Hosted by the Interagency Working Group on Coal and Power Plant Communities and Economic Revitalization.

The first report INITIAL REPORT TO THE PRESIDENT ON EMPOWERING WORKERS THROUGH REVITALIZING ENERGY COMMUNITIES can be read here.

In one month the AZCC will return with the staff’s timeline of this project. Commissioner Márquez was correct in saying “this is complex”.

To watch the video click here. To read the documents submitted by speakers and staff click here.