THOUSAND OAKS, CA – Young Artists Forever will present a gender-blind production of Stephen Sondheim’s Assassins August 16 – 25, 2019,  Fridays and Saturdays and Sundays at 8:00 pm,  and  Wednesday and Thursday performances at 8:00 pm on the Outdoor Patio Stage at the Hillcrest Center for the Arts, 403 West Hillcrest Drive in Thousand Oaks.  With music and lyrics by Stephen Sondheim and book by John Weidman, this Tony Award-winning musical is based on an idea by Charles Gilbert Jr.  Directed by Joanna Syiek, with musical direction by Jennifer Lin, and assistant direction from Mitchell Webb.  All proceeds benefit Young Artists Ensemble.  This play is recommended for mature audiences. 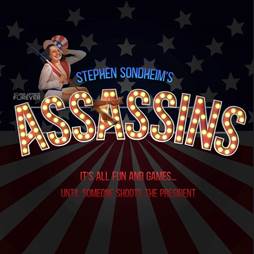 This multiple Tony Award-winning classic takes a lens to the pattern of presidential assassination attempts while examining America’s culture of celebrity and the violent means some have resorted to in order to obtain it. From John Wilkes Booth to Lee Harvey Oswald, writers Sondheim and Weidman bend the rules of space and time to explore a limbo where America’s famous presidential assassins meet and connect. The show allows the characters to divulge their crimes committed in the name of the American Dream, and asks audiences to examine the ways in which the country has or has not changed in its number of years since its patriotic birth.

“We wanted to explore what it means to take a hard look at history from a lens that is less concerned with gender, and more concerned with the motivation behind what inspires an individual to demand their part of the American Dream. Each and every flawed historical human in this show had their own version of what the country should look like, and a violent idea about how to move the needle.” says director Joanna Syiek. “We recognize that the country still has growing pains to sort out, and hope this show serves as a reminder of the paths we no longer need to tread.”

Director Joanna Syiek is the Indy Award Winner for her direction of American Idiot.  She was received two Broadway World Nominations for Best Direction of LIZZIE and The Pokémusical.  Musical director by Jennifer Lin received an Ovation Nomination for Best Music Direction of Priscilla Queen of the Desert.

Young Artists Forever is a talented and generous group of Young Artists Ensemble Alumni and Friends who gather to donate their time and talents for the presentations of fun musical productions. This Ventura County based non-profit theatre was created with the goal of providing hands on learning experiences for graduates of the YAE program hoping to pursue careers in Directing, Producing, Designing or other jobs in the theatre industry.  Recent Young Artists Forever productions include “Evil Dead the Musical”, “Avenue Q”, “Spring Awakening”, “Into the Woods”, “Godspell”, “Rent”, “The Last Five Years” starring Veronica Dunne, “Urinetown”, and “The Rocky Horror Show”.  These productions are created to support the performing arts and raise money for Young Artists Ensemble, while giving YAE alumni a chance to come back to perform in the place where they first began to develop their craft and deepen their love for the theatre.

Young Artists Ensemble is an award-winning theatre company for young people that has received many accolades, including the Encore Statue Award from the City of Thousand Oaks for Excellence in the Arts.  It has received top honors in the National Youth Arts Awards for many of its Teen Summer Musicals and its Conejo Theatre For Everyone.  When the Young Artists Ensemble started in 1981 it was a small group performing on a shoestring budget in the back room of a local park. Today it produces an annual Family Theatre Season as well as annual Teen Dramas and Teen Summer Musicals. YAE works to instill a seed of love for the arts in the youth of this community that will continue to grow and blossom throughout their lives. Yearly it provides opportunities for hundreds of kids between the ages of 10 and 19 to perform in well-known musicals and plays, and hosts an annual program that integrates developmentally delayed adults into the theatrical community.

Reserved tickets are $20, with $15 seats available for students and seniors in the side sections, and may be purchased by calling 805-381-1246 or visiting www.hillcrestarts.com.

WHAT:   Young Artists Forever presents Assassins combining Sondheim’s signature blend of intelligently stunning lyrics and beautiful music with a panoramic story of our nation’s culture of celebrity and the violent means some will use to obtain it, embodied by America’s four successful and five would-be presidential assassins. Bold, original, disturbing and alarmingly funny, Assassins is perhaps the most controversial musical ever written. Assassins lays bare the lives of nine individuals who assassinated or tried to assassinate the President of the United States, in a one-act historical “revusical” that explores the dark side of the American experience. From John Wilkes Booth to Lee Harvey Oswald, writers, Stephen Sondheim and John Weidman, bend the rules of time and space, taking us on a nightmarish roller coaster ride in which assassins and would-be assassins from different historical periods meet, interact and inspire each other to harrowing acts in the name of the American Dream.

OTHER:
Free parking is always available.