After Weeks of Violent Protests, Some Now Call for Toppling of Jesus Statues

As statues of historical American figures, including those of former presidents, are being forcibly torn down across the nation, Black Lives Matter activists are now beginning to target Christianity.

Historical churches are being defaced as some call for statues of Jesus to be torn down.

“Yes, I think the statues of the white European they claim is Jesus should also come down. They are a form of white supremacy,” wrote political activist Shaun King, who is an open supporter of Black Lives Matter.

“In the Bible, when the family of Jesus wanted to hide, and blend in, guess where they went? EGYPT! Not Denmark,” King continued in a June 22 Twitter post. “Tear them down.”

In Washington, vandals defaced the historical St. John’s Episcopal Church located just one block away from the White House. The letters “BHAZ” (Black House Autonomous Zone) were scrawled on the pillars in front of the church. The zone has since been dismantled by police.

Meanwhile, some have publicly supported the comments made by King.

“#ShaunKing is right about #WhiteJesus and #WhiteSupremacy,” wrote economist and activist Boyce Watkins. “If #Jesus had been presented in his truest form, ya’ll would have hanged him from a tree.”

Tory Russell, mission director for The International Black Freedom Alliance, wrote in a Twitter post, “shaunking trying to do more decolonizing of the US than your movement favorites.”

“All murals and stained glass windows of white Jesus, and his European mother, and their white friends should also come down,” he said. “They are a gross form white supremacy. Created as tools of oppression. Racist propaganda. They should all come down.”

The targeting of Jesus has come on the heels of the targeting of statues of former U.S. presidents, which followed on from attacks on statues of Confederate generals sparked after protests across the country broke out in wake of the death of George Floyd, a black man who died in police custody. Attorney General William Barr recently said that the Department of Justice has evidence that anarcho-communist group Antifa and other similar groups have “hijacked” the initially peaceful protests.

The administration is increasing its efforts to crack down against vandals. On June 23, Trump announced that he has permitted the federal government to arrest anyone who defaces or tears down any monument “effective immediately.”

“I have authorized the Federal Government to arrest anyone who vandalizes or destroys any monument, statue or other such Federal property in the U.S. with up to 10 years in prison, per the Veteran’s Memorial Preservation Act,” he said on Twitter.

“This action is taken effective immediately, but may also be used retroactively for destruction or vandalism already caused,” Trump continued. “There will be no exceptions!”

“This far-left anger is sparing some heroes of their own,” he said on June 23. “I understand that in Seattle, a large statue of Vladimir Lenin stands quite untouched.”

Protesters in California toppled a statue of Junipero Serra, a Roman Catholic Spanish priest widely regarded as a founder of the religious California Missions. In response, the Spanish Embassy in Washington issued a series of Twitter posts stating they “deeply regret the destruction of the statue … and would like to offer a reminder of his great efforts in support of indigenous communities.”

Statues of various historical figures have been torn down across multiple states. In one incident in California, a group of vandals dressed in black cheered as they used a cord to pull down a statue of of Francis Scott Key, who penned the national anthem.

Amid the unrest, statues of America’s Founding Fathers also became a target as monuments of George Washington and Thomas Jefferson were torn down. One of the latest targets is a statue of the 26th president of the United States, Theodore Roosevelt, located at an entrance to the American Museum of Natural History in New York City.

The statue of Theodore Roosevelt located in front of the American Museum of Natural History in New York on June 23, 2020. (Chung I Ho/The Epoch Times) 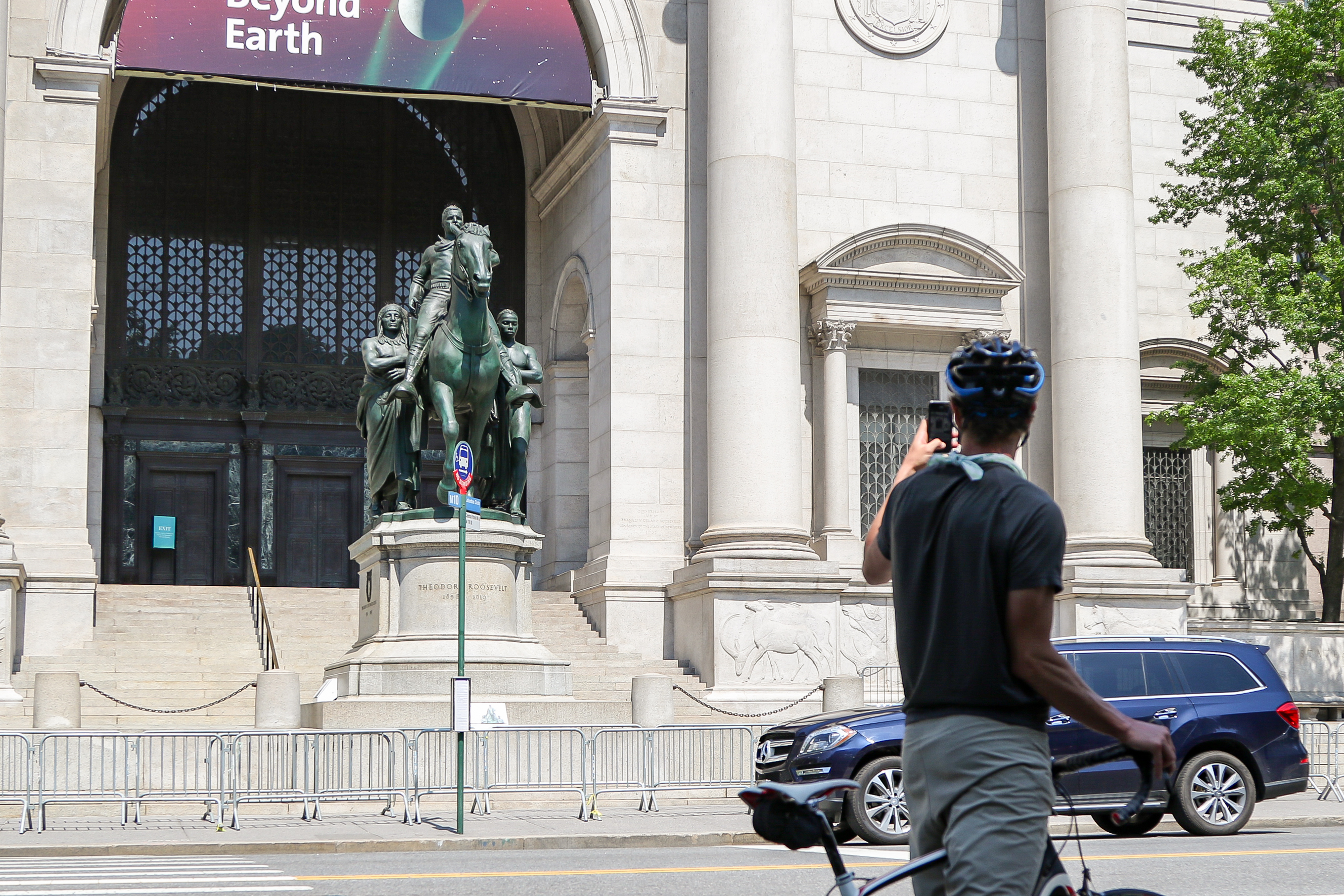 A cyclist takes photos of the Theodore Roosevelt Statue in front of the American Museum of Natural History in New York on June 23, 2020. (Chung I Ho/The Epoch Times)

While the Roosevelt statue hasn’t been physically toppled by vandals, Ellen Futter, the museum’s president, has asked New York City Mayor Bill de Blasio to remove the statue. The mayor accepted the request on June 21.

Futter said in a letter that the statue has been controversial due to its “hierarchical composition that places one figure on horseback and the others walking alongside, and many of us find its depictions of the Native American and African figures and their placement in the monument racist.”

The city’s government didn’t respond to a request for comment from The Epoch Times on the timeline of the statue’s removal.

Communism expert and author Trevor Loudon called the statue defacing happening across the nation a “Maoist tactic of erasing the form of culture.”

According to Loudon, Marxist organizations such as Liberation Road and the Workers World Party have both been involved in the recent escalations.

Yang Jianli, a Chinese dissident and son of a former Communist Party leader who now heads the Citizen Power Initiatives for China, a pro-democracy NGO in the United States, also said the statue toppling was reminiscent of China’s cultural revolution.

“The behavior on the part of the protestors did remind me a lot of the cultural revolution,” Yang told The Epoch Times.

“[It’s] familiar in violence, anti rule-of-law and political madness,” he said. “The BLM protestors have crossed the line when they break or tear down the statues of America’s Founding Fathers such as Washington and Jefferson.”