AG Barr Says Trump Admin Will Work on Use of Force Standards, Training With Police Leaders

Attorney General William Barr said on Monday that the Trump administration will work with law enforcement leaders to reform policing practices by improving standards and training amid days of protests calling for change following the death of George Floyd.

Barr made the comments while participating in a roundtable with law enforcement officials in the White House. He was joined by President Donald Trump, other members of the Trump administration, and law enforcement leaders.

During the meeting, Barr expressed the Trump administration’s commitment to making reforms in the policing profession, adding that the administration had already taken steps to make changes to the criminal justice system.

“The time for waiting is over. It’s now incumbent on us to bring good out of bad,” he added.

The attorney general’s comments come as protests have erupted across the United States in dozens of cities and towns following the death of Floyd, a black man who died as former Minneapolis police officer Derek Chauvin knelt on his neck for nearly nine minutes during an arrest.

Amid the protests, some city officials have said the would defund or even dismantle the police. Among them is New York City Mayor Bill De Blasio, who said on Sunday that the city will move some of its funding from the New York Police Department to social services, while the City Council of Minneapolis said it will abolish its police department but didn’t offer many details. 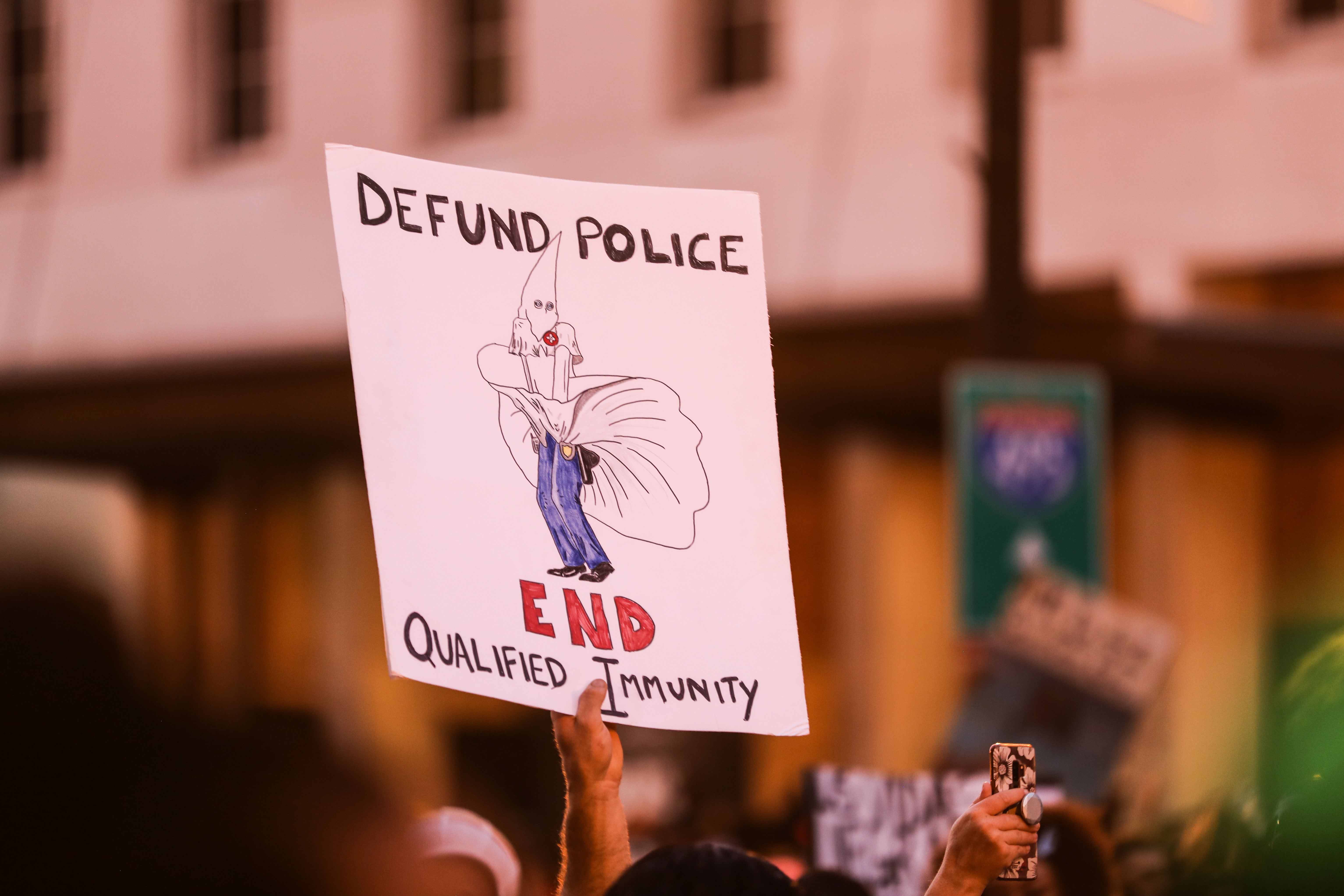 A “Defund the Police” sign is held up during a protest near the White House following the May 25 death of George Floyd in police custody, in Washington on June 6, 2020. (Charlotte Cuthbertson/The Epoch Times) 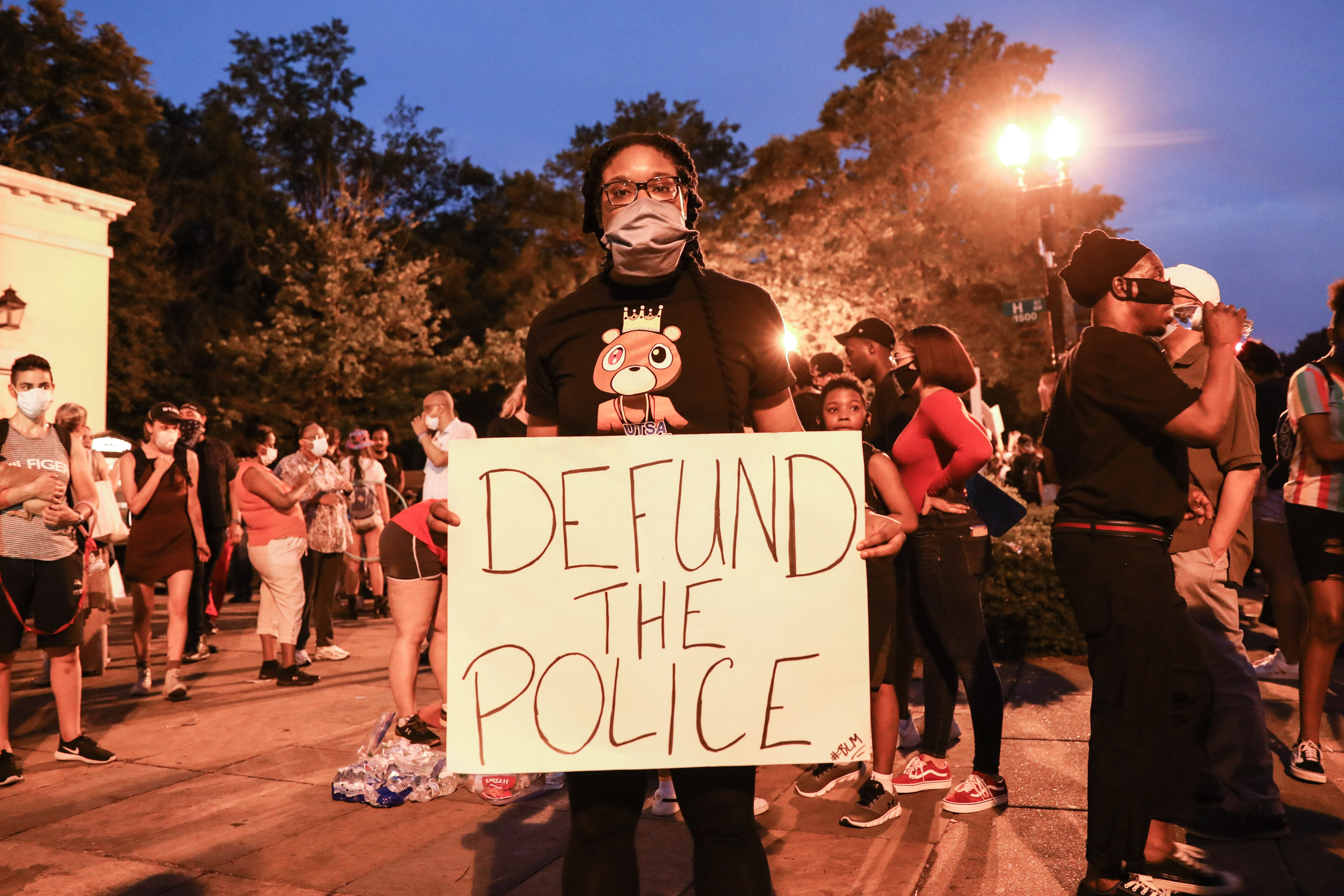 A protester holds a “Defund the Police” sign during a protest near the White House following the May 25 death of George Floyd in police custody, in Washington on June 6, 2020. (Charlotte Cuthbertson/The Epoch Times)

The “Defund the Police” movement, which has been seen during protests and on social media in recent days, calls for reallocating funding destined for police departments to social programs, particularly to assist the African American community.

During the meeting on Monday, Trump said that he does not support local plans to reallocate police funding to other programs.

“Our police have been letting us live in peace and we want to make sure we don’t have any bad actors in there and sometimes we’ll see some horrible things like we witnessed recently but I say 99.9–let’s go with 99 percent of them–great, great people and they’ve done jobs that are record-setting,” he said.

The president also expressed that he was opened to ideas for revamping police tactics, including using gentler tactics.

Trump has urged a “law and order” approach to the protests, which was echoed by Barr who added that law and order is “the foundation of civilization.”

“It is our responsibility to make sure that our country is ruled by law and not by violence,” he said.

Meanwhile, in an interview with Fox News on Monday, the attorney general said he believes it was “wrong” to defund the police and hold the entire police structure responsible for actions of certain officers, adding that he thinks it was also “dangerous to demonize [the] police.”

He added that pulling back the police from communities that usually see a high number of gun violence could result in “more harm done in these communities.”

Jack Phillips contributed to this report.