At a time when US consumer price inflation has reached highs unseen in over 40 years, consumer borrowing in the country has also been on the rise. 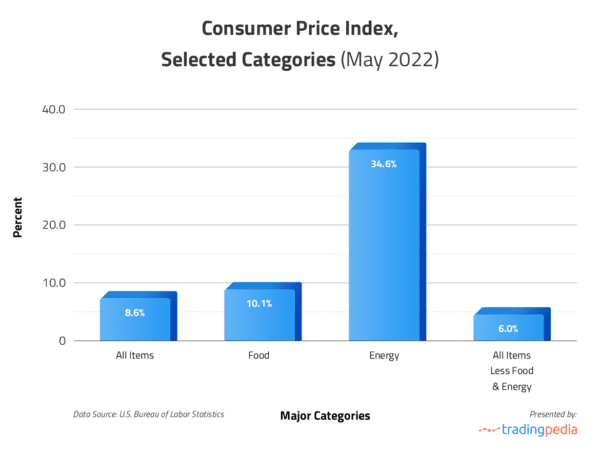 The core Consumer Price Index, which excludes prices of volatile categories such as food and energy, has increased at a slower rate for a second straight month in May, by 6.0%. But still, price pressure build-up is reflected by almost all of the index’s components, with cost of shelter rising at the sharpest annual rate since February 1991, by 5.5%, cost of new vehicles being up 12.6% year-on-year, while airline fares being up 37.8% year-on-year amid a solid rebound in air travel demand. Figures clearly show that US core CPI inflation has remained well above the Federal Reserve’s inflation objective of around 2% since early 2021. 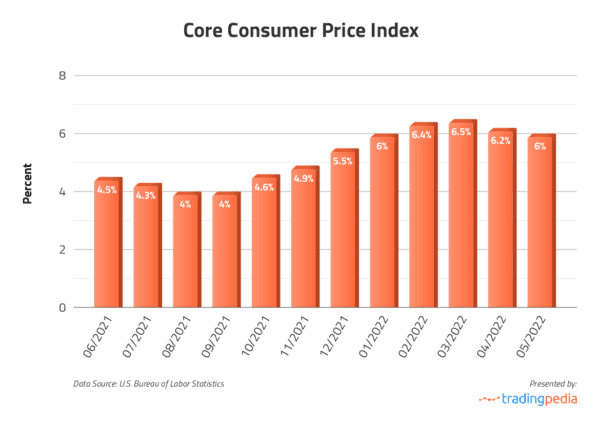 “Excessively high inflation tends to undermine consumers’ purchasing power, especially if their wages or other sources of income have not increased. Therefore, to meet rising costs of living, consumers may need to borrow. And with interest rates staying at all-time lows, especially throughout 2021, consumer credit has seen sizable growth.”
– Michael Fisher, analyst at TradingPedia said.

According to official Federal Reserve data, Consumer Credit Outstanding, which covers most credit extended to individuals excluding loans secured by real estate, rose at a seasonally adjusted annual rate of 5.9% to $4,431.9 trillion in 2021. And, in the first quarter of 2022, consumer credit surged to $4,528.7 trillion from $4,228.6 trillion in Q1 2021.

Preliminary data for April 2022 showed that Consumer Credit Outstanding increased by 10.1% compared to April 2021, following a record (12.7%) surge in March. Total consumer credit rose $38.1 billion between April and March, following a revised down $47.3 billion increase between March and February 2022. 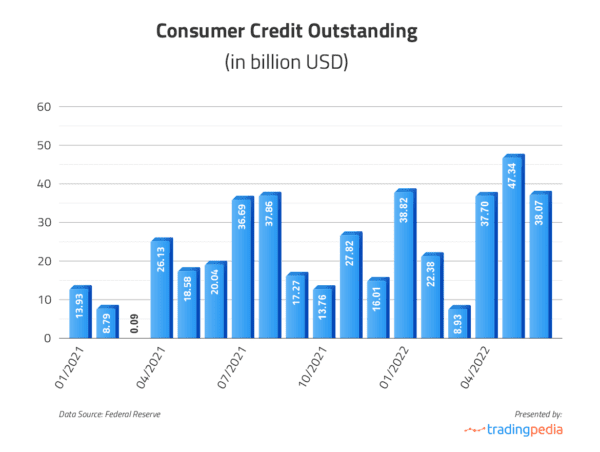 Since the rate of inflation has far exceeded wage growth, consumers have relied on their savings and credit cards to pay for essentials as well as discretionary purchases.

According to the New York Fed Consumer Credit Panel, 229 million new credit card accounts were opened in the first quarter of 2022 in the US, or higher than the prior quarter and also exceeding pre-pandemic levels.

However, as the Federal Reserve has begun to tighten monetary policy in an attempt to curb inflation, the annual percentage rates on credit cards will likely rise as well. The average credit card rate has remained above 16% in 2020, 2021 and at the beginning of 2022, while experts project a rise to 18% by year-end, as the Fed continues hiking the target range for the federal funds rate. 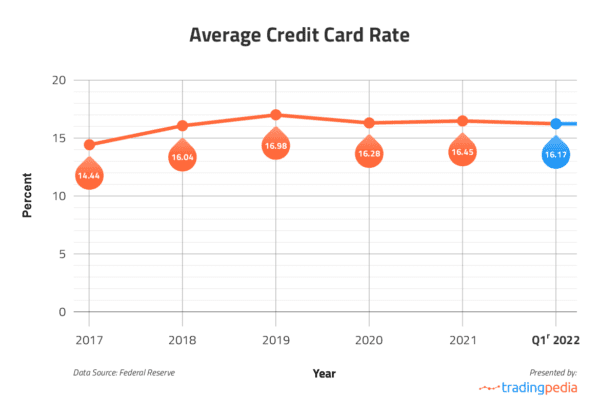 As of yet, the highest annual percentage rate on record stands at 17.87%, registered in April 2019.

On the other hand, higher cost of living due to inflation may force consumers to spend a larger part of their disposable income on mortgages, rents or utilities. As a result, they may be left with smaller amounts to transform into savings, or to use to pay off their credit card debts (especially if their earnings have remained without change).

US households’ Personal Savings Rate has been decreasing steadily since March 2021 and in April 2022 it fell to 4.4%, or the lowest since the 2008-2009 financial crisis, data from the Bureau of Economic Analysis showed.

And since CPI inflation started accelerating at the beginning of 2021, the relation between higher inflation rate and lower savings rate becomes quite evident.

With personal savings decreasing, consumers may be forced to spend mostly through credit cards. And as higher cost of living weighs on their monthly income, the risk of default on debt heightens. According to official government data, US delinquency rate on credit card loans has begun to rise during the second half of 2021 and has reached 1.73% in the first quarter of 2022.

On a more positive note, the delinquency rate is still quite far from the extreme levels observed at the height of the 2008-2009 financial crisis.