Public health and global economies are currently under siege with no end in sight due to the rapid spread of COVID-19. By reframing our interaction with and treatment of the natural world, particularly that of trafficking wild animals, diseases and resulting pandemics that upend society can be prevented. Wildlife markets and zoonoses — diseases that can be transmitted to humans from animals — have emerged as the cause of the novel coronavirus nCoV-2019 pandemic currently plaguing our world. In California, industries exploiting and trafficking wildlife as commodities for live food markets pose just as much a threat to public health and safety as do other wildlife farms and markets around the world. As a result, PawPAC, a California-based humane legislative group with a 40-year history of advocating for animals, has sent a letter to Governor Gavin Newsom and State Surgeon General Nadine Burke Harris urging them to take immediate action to ban the sale and importation of wildlife and non-native species — specifically birds, amphibians and reptiles — in the state of California for human consumption. 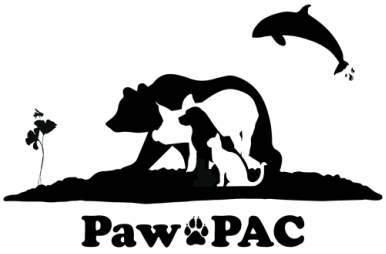 Founded in 1980, PawPAC is a statewide committee that advocates for all nonhumans and their environment, to encourage transparency in the California State Legislature through humane scorecards while promoting more humane laws throughout the state. PawPAC has engaged with California policy makers since 1993 on live food market issues in the state, on the basis of health, the humane treatment of animals and biodiversity stewardship. Necropsies of diseased frogs and turtles from California’s live food markets revealed a host of diseases including salmonella, pasteurella and E. coli, among others. This evidence, along with concerns for the ecosystem, led the Fish and Game Commission to adopt policy in 2010 to “cease issuing importation permits for any live non-native turtles or frogs.” However, the recommended policy was never added to the California Code of Regulations. Consequently, non-native turtles and frogs are currently still sold in California live food markets with a reported two million bullfrogs and 400,000 turtles imported into the state each year. The Department of Fish and Wildlife conducts ongoing studies of zoonotic diseases, which are known to be found in birds, turtles, frogs, pigs, cattle, and other animals. As humans continue to encroach upon the natural world, increasingly animals are being displaced and in many cases poached from their habitats to be sold in wildlife markets and sometimes even online. This trafficking results in stressed animals who are more susceptible to disease. When commingled with other species in tight quarters when shipped, or while awaiting slaughter at these animal markets, this creates a petri dish of contagion just waiting to infect the next victim.

Just last week, it was confirmed that there was a highly pathogenic avian flu outbreak in South Carolina.  As of April 17, 2020, the USDA reports it has detected the outbreak of virulent Newcastle disease at 476 premises in California, resulting in the euthanasia of millions of birds. The disease has not yet seriously endangered humans; however, the commingling of various species, and human contact with them in the markets are a ticking time bomb for the next pandemic.  We must be far more vigilant in stopping the potential risk of disease at the source before it starts. We are therefore calling on Governor Newsom and State Surgeon General Burke Harris to immediately end the practice of selling live wild animals in our markets for human consumption.

Ben Williamson, U.S. Director of World Animal Protection states, “We commend Governor Newsom’s efforts to contain the spread of COVID-19 in California. Given the undeniable link between infectious diseases in humans and their transmission through wildlife, we’re calling on him to use his authority as Governor to bring an immediate end to the commercial wildlife trade in California. We can help prevent future pandemics by protecting people from diseases originating in wild animals, and by protecting wild animals from being cruelly farmed or poached and sold for human consumption.”

Founder and CEO of the global animal protection nonprofit Animals Asia, Jill Robinson, says change is long overdue: “No continent, no country, no city is immune or without blame as we reflect on the changes we know have to be made, or risk the next punishment for our behavior that is already waiting in the wings. Change is possible if we look at our habits, the lives that we live, and start the ripple of that change in our own backyard.”

In light of the current health crisis, we must act swiftly to finally end the wildlife trafficking so vitally linked to viral outbreaks. PawPAC Chair René Rowland states, “With public health now teetering on the threat of the next global crisis, now is the time for California to take action to end the practice of selling living animals for food right here at home. Let’s remove the possibility of California becoming the next pandemic epicenter, and in so doing we’ll raise our humane standards, boost biodiversity and even offset the effects of climate change that stem from species destruction and trafficked wildlife.”

PawPAC was founded in 1980 by a group of animal advocates, most notably the late Virginia Handley, and seeks to benefit all nonhumans by bringing transparency to the work of the California Legislature through its annual humane scorecard, which helps to inform its endorsements of candidates for statewide office. Ms. Handley helped to blaze a trail on the issue of California’s live animal food markets, yet the issue still faces us today.

Why do we ignore our scientists? We are undermining our very existence by doing so. Activists and scientists has been fighting the issue of invasive frogs and turtles for decades. Whenever there is traction on this issue, politicians cave in due to cultural concerns or big money interests.

Beyond the cruelty in allowing live markets right here in California, there is the direct threat caused by shrinking biodiversity brought on by invasive species taking over the habitat of our native species and the great potential for disease that the non-native species brings with them.

We are destroying our environment when we allow invasive species to take over. This is just part of the horror of climate change. We now also see that our inhumane interaction with animals, both wildlife and factory farmed, has brought on pandemics in the past, in the present, and, undoubtedly, the future.

Please reach out to Governor Newsom and urge him to tighten up the enforcement of policy that was meant to protect us, but never enforced. Please befriend our new Surgeon General. She has a tremendous heart for children. Our children (and adults) are endangered by salmonella and other diseases that can be found in pets sold by street vendors. And these are nowhere near as scary as the ones that have evolved and will continue to evolve into pandemics, like we are experiencing right now.

We can blame other people and other cultures all we want as to the source of COVID-19. But, the next pandemic may be caused by us, right here in California. We have been lax in letting in potential dangerous diseases through our wildlife trade and importation of non-native species. Let us protect California and the world, by listening to our scientists. We need to protect all animals, biodiversity, and humanity itself.

This reader and long time animal advocate would like to express her deep gratitude to PAWPAC and all those organizations and private individuals who know that now is the time to address the appalling conditions extent in ‘Wet Markets’ both for the victimized animals, many of them ‘wild’ and the persons who purchase from those markets as they put themselves in grave danger of contracting the COVID-19 virus fostered in those hellish crammed cages! This situation has existed for far too long despite the pleas of scientists and the humane community who has pleaded for attention to those dangerous conditions which is now being felt world wide. These ‘markets’ must close and now! The world cries out that the TIME is NOW to do so!