Amy Coney Barrett: “We still work for you; your Constitution establishes the rule of law with an independent judiciary that is so essential”

WASHINGTON, D.C.—”We still work for you; your Constitution establishes the rule of law with an independent judiciary that is so essential,” said Amy Coney Barrett, the newest Supreme Court Justice in her speech after taking the oath from Justice Clarence Thomas, the longest serving Supreme Court Justice (29 years) still alive.

“The oath I have taken means that I will do my job without any fear of favor; independent of both political branches and my own preferences. I love the Constitution and the Democratic Republic it establishes. I will devote myself to preserving it. 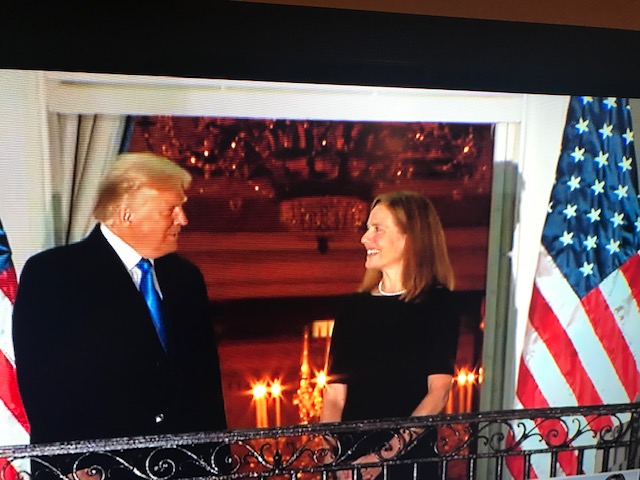 “The separation of duty from policy preference is what makes the judiciary distinct among the three branches of government. Judges are independent from Congress and the President.”

Supreme Court Justice Amy Coney Barrett, is the third Supreme Court Justice nominated by President Donald J. Trump and confirmed by the U.S. Senate (the others are Justices Neil Gorsuch in 2017 and Brett Kavanaugh in 2018) in a 52-48 vote with the only Republican voting against her confirmation being Maine Senator Susan Collins.

Barrett, a staunch pro-life Catholic conservative and Notre Dame Law professor, was appointed by President Trump onto the U.S. Court of Appeals for the 7th Circuit in 2017. At the time of this appointment, Senator Dianne Feinstein (D-CA), spoke out against Barrett saying: “the dogma lives loudly within you.”

Senate Majority Leader Mitch McConnell (R-KY) called Barrett “one of the most brilliant, admired, and well-qualified nominees in our lifetime.”  While Minority Senate Leader Chuck Schumer (D-NY) called her appointment one of America’s “darkest days.”

Barrett, will go through a private ceremony officiated by Supreme Court Chief Justice John Roberts on Oct. 27 at the U.S. Supreme Court. She will then take her seat on the Court. Barrett replaces Supreme Court Justice Ruth Bader Ginsburg who died Sept. 18.

This SMART woman, being elevated to The Supreme Court, makes Senator Charles Schumer of New York want to declare war on this country. What a knucklehead! LOSER