As Parents Fight To Take Back Their Children’s Education, They Face ‘Radical And Entrenched’ Pushback

Hollie Plemmons’ eight-year-old son squeaked hello when he got into her car after school one afternoon and immediately she knew something was wrong.

“I turned around because I know when he squeaks what’s going on and I looked at him and he’s blue … he was having an asthma attack, he could have died,” Plemmons told the Daily Caller News Foundation. “I had to pull over, give him my rescue inhaler and save his life in the car.”

Her first grade son had asthma and was required by the Fort Worth Independent School District (FWISD) to wear a mask for the duration of the school day.

“The teachers in the years past … they had noticed that he couldn’t breathe and they would intercede on his behalf,” she said. “They couldn’t see his face, they didn’t know that he was struggling to breathe.”

Plemmons said that was the final straw for her, she knew from that point forward, she couldn’t mask him again.

“Then the school said no, we’re the law and so I sued,” Plemmons said.

In August, as Plemmons walked her son to his first day of class, parents found out she was the woman suing the school over its mask mandate.

“They [parents] called me a murderer, as I walked him to class with his little eight year old hand in mine,” and he asked her why they were calling her that, she said. “As I left and had dropped him off in class and was walking down the sidewalk to my car, parents were behind me and were spitting on me.”

Her son only attended that school for two more days, before he was transferred to another school in the district that Plemmons thought would be safer for her family.

Parents across the country are experiencing similar threats and intimidation tactics to silence or discourage them from speaking out against school policies they disagree with, one mother told the DCNF.

Scarlett Johnson first attended a school board meeting in the summer of 2020 when it looked like her kids’ district, Mequon-Thiensville School District (MTSD) in Mequon, Wisconsin, wasn’t going to be in person for the fall. She and other parents organized protests and were successful in lobbying for the reopening of in-person classes by the second week in September.

Around the same time, Johnson said she saw Critical Race Theory (CRT) emerging in her district. CRT holds that America is fundamentally racist, yet it teaches people to view every social interaction and person in terms of race. Its adherents pursue “antiracism” through the end of merit, objective truth and the adoption of race-based policies.

As Johnson did some digging, she went from a stay at home mom to a “parent activist,” she explained. When the school board didn’t listen to her and the dozens of other parents who had concerns about what was happening in the district, they started a recall effort to remove school board members.

“I didn’t realize that they were activists,” Johnson said. “That’s what I think a lot of parents have a problem with, how radicalized and how entrenched our districts are into ideology that just doesn’t sit well with the majority of the constituents that they serve.”

She and a coalition of parents were successful in unseating four school board members as part of the recall effort, which the board challenged with a lawsuit, but they won again. Then, she decided to run for one of the vacant seats “and that’s where it got very, very dirty,” she said.

The Democratic Party of Wisconsin went through Johnson’s social media and submitted content to the Milwaukee Journal Sentinel, indicating she was a transphobic, white supremacist based on old tweets that she said were taken out of context, despite the fact that she comes from a multi-racial, predominantly Puerto Rican family, she told the DCNF. She said the article was a catalyst for death threats.

“The amount of threats that were coming in were just causing me so much anxiety and stress that I just just shut it down,” Johnson said.

She also got multiple letters in the mail, but one was so bad she brought it to the police.

“Why don’t you just be a good little Trump KKKult member, not wear a mask, avoid vaccination and die of COVID?” the letter said. “While you’re at it, kill of your entire family to rid the gene pool of you Neanderthal losers.”

“It’s just too bad traitors like you and Trump don’t face the firing squad these days,” the letter continued. “Do us all a favor and shoot yourself, you disgusting piece of shit!” 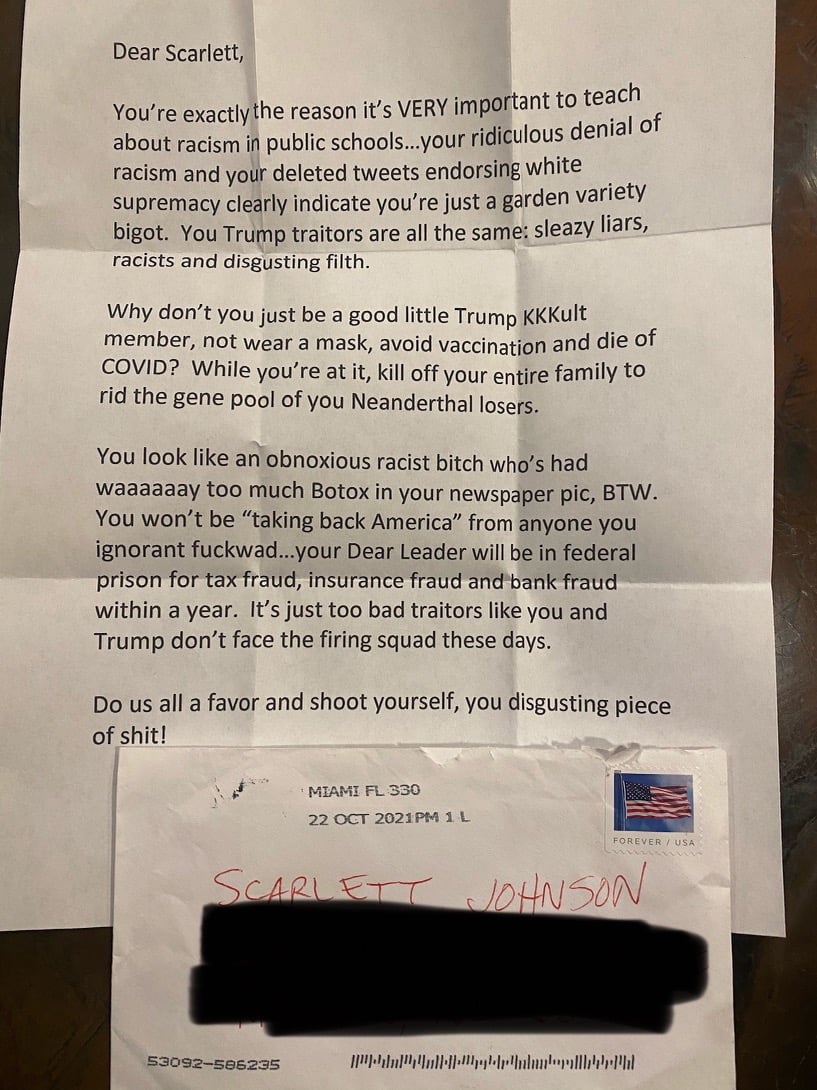 While standing outside the local library holding signs to encourage community members to sign the school board recall petition, people would drive by in their cars screaming “fuck you, you fucking racist” and “I hope you die,” sometimes in front of their young kids, she said.

“You just have … to keep going and realize that this is a very fringe thing that you’re fighting,” she said.

‘It Blew My Mind’

Like Johnson, Amber Schroeder had never been to a school board meeting until a year ago. But as a single mother of three at MTSD schools, she knew she had to do something once she saw what was happening to her kids at school.

“I very quickly learned that when you get involved in these situations you do become the victim of their attacks,” Schroeder said. “They just don’t want to make it easy for you because they really don’t want you involved.”

Grown men and women would drive past with children in their cars and stick their heads out of their windows to flip her off and call her a racist, she said.

“It blew my mind that people in this community could be so angry and so vile, that they would flip off a mob on the side of the road, standing with children and yell out the window” calling parents white supremacists or a racists “over a school board recall that had nothing to do with race,” she said.

Because of her outspoken stance against the school board and her role in the recall, Schroeder “became the victim of like an online cyber bullying campaign,” spearheaded by a woman who didn’t live in the district, she claimed.

This woman “stood up in a school board meeting and started screaming profanities and calling me a home wrecker,” she said.

Schroeder said the woman has also maligned her on Facebook and on a page for one of the district’s elementary schools, which she controls as an administrator, according to posts obtained by the DCNF.

“The main person who organized the most recent protest for the masks to be removed and spoke about to the leadership failing is not educated herself? Her name is Amber Schroeder,” one of the posts said. “The reason she landed into Mequon is because she allegedly stole someone’s husband … so she ruined her family and else’s yet she wants to blame MTSD that masks are ruining her kids emotional stability.”

Another post said Schroeder was “a woman who has never done anything but making a career out of taking advantage of men with money … a legit prostitute.”

“These are absolutely false allegations meant to harass, bully, and publicly intimidate,” Schroeder told the DCNF. “They hold no truth and are an attempt to harm reputations from a woman who wants to tear other mothers down, while she illegally attends our schools and causes so much chaos in our community.”

In the nearby Germantown School District, mother Alyssa Pollow has been targeted at the hospital where she works as a nurse practitioner in Milwaukee, Wisconsin, because of her outspoken stance against the school board.

Pollow set up a form where parents, students and teachers could report ways they are seeing CRT in the classroom, but parents in favor of CRT used it to file fake submissions, criticizing anti-CRT parents and characterizing them as racist, bigoted white supremacists, she said.

Speakers at the meeting “were also saying, we know where you work,” Pollow said. “You’re going against the Diversity, Equity and Inclusion statement of your employer.”

At a June 21 school board meeting, pro-CRT community members strategically organized themselves to speak back to back. The first speaker got up and read the Diversity, Equity and Inclusion statement of the employer of one of her fellow anti-CRT parents, which she said was an attempt to threaten them into stopping their activism.

“Then sure enough, the next hospital they say is Children’s Wisconsin, which is where I work,” she said. “Then again, they read the DEI statement, and then they went down the list of reading the businesses who employ either parents or school board members [opposed to their policies].”

At another school board meeting on Sept. 27, Pollow said, as a medical professional, she didn’t think masks worked during the public comment portion of the meeting. Pollow said she never mentioned her job title or where she worked.

“That seemed to be like the catalyst that they were waiting for because then two days later, three complaints were filed with the Patient Relations Department of the hospital.”

One of the three complaints came from a Germantown parent, who is a pediatrician at the hospital. She said that Pollow was “spreading false information about Covid” and had identified herself as a nurse at the hospital speaking against masks, which Pollow denies. The complaint also claimed Pollow did “not promote the core values of the hospital.”

The pediatrician crossed the line between personal and professional matters by using a work email “to make a personal attack” on her, Pollow said.

Another complaint came from the wife of a current school board member, who attacked Pollow’s character and questioned the hospital on how she could be trusted “to make good decisions … when she is making dangerous decisions in the community” as she attempted to “thwart masking & any attempt to keep our kids safe,” Pollow told the DCNF

She concluded by adding that if her son were to require hospital care, she “would be forced to look elsewhere.”

“I think this group of parents, they don’t have the stamina for this long haul fight,” she added. They are used to using “name calling” to intimidate parents like her so “they’ll just go away,” she added.

“Because for most people when you’re calling them a racist or white supremacist or all of these other things they back down because they don’t know what to do,” Pollow said. “Because I’ve held my ground enough times, I think they’re now realizing that I’m not going to go away.”