In Joe Biden’s America, a U.S. Army Major General took to Twitter to complain about the Army’s policy on French manicures. At the same time, reports surface the Chinese are busy launching a hypersonic weapon that flies around the world.

Major General Jo Clyborne’s first-world problems are no place for Twitter as the U.S. continues to lose the hypersonic race against China.

Chinese military vs US military pic.twitter.com/Hodac2OKBU

The world learned on Saturday evening that China had made “astounding progress on hypersonic weapons and was far more advanced than U.S. officials realized,” sources told F.T.

In August, the Chinese military launched a rocket that catapulted a hypersonic glide vehicle into low-Earth-orbit. It flew around the world before missing its target by only two dozen miles, three sources said.

The latest test raises an abundance of questions about China’s rapid military modernization, which is beating the U.S. in the hypersonic weapons race.

“We have no idea how they did this,” a fourth source said, referring to China’s ability to fly a hypersonic glide vehicle across the world. 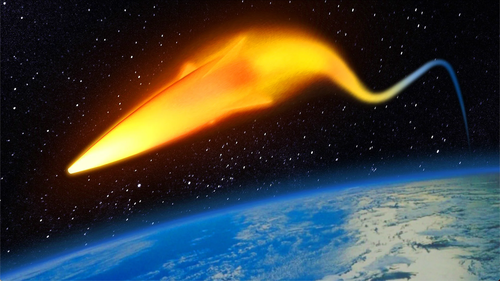 Two sources said that China could, in theory, fly the weapon over the South Pole, a region that U.S. missile defense systems lack coverage.

John Kirby, the press secretary for the Department of Defense, said the Pentagon views China as a great challenger as both countries race towards developing and fielding hypersonic weapons that fly multiple times faster than sound.

“We have made clear our concerns about the military capabilities China continues to pursue, capabilities that only increase tensions in the region and beyond,” Kirby said.

But a spokesman for China, Liu Pengyu, said Beijing has no interest in global domination.

“We are not at all interested in having an arms race with other countries,” Liu said.

“In contrast, the U.S. has in recent years been fabricating excuses like ‘the China threat’ to justify its arms expansion and development of hypersonic weapons. This has directly intensified the arms race in this category and severely undermined global strategic stability.”

As hypersonic weapons are heralded as the next game-changing weapon for militaries worldwide, China’s latest test suggests the U.S. is losing the hypersonic race, which may explain why Pentagon Under Secretary of Defense for Research and Engineering Michael Griffin previously said that developing hypersonic capabilities was “the highest technical priority,” according to Defense News.