Hui Ka Yan, founder of China Evergrande Group, had once amassed a fortune of $42.5 billion, placing him at the top of the wealth rankings for all of Asia. But 73% of that immense fortune has now evaporated, and the tycoon will almost certainly lose even more as anxious creditors, suppliers and homebuyers besiege Evergrande’s offices. 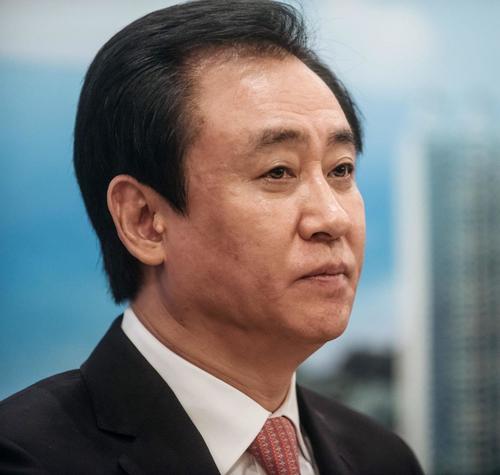 But that’s not nearly enough for Beijing.

In a new twist of how China may soon conduct corporate bankruptcies, Chinese authorities told Hui Ka Yan to use his personal wealth to “alleviate” China Evergrande Group’s deepening debt crisis, Bloomberg reported according to people familiar with the matter.

Beijing’s “directive” – which to us sounds just a bit more forceful than merely “urging” – to the Evergrande founder came after his company missed an initial Sept. 23 deadline for a coupon payment on a dollar bond, and takes place as local governments across China are monitoring Evergrande’s bank accounts to ensure company cash is used to complete unfinished housing projects and not diverted to pay creditors, the people said.

According to Bloomberg, the demand that Hui to breach the corporate veil and “tap his own fortune to pay Evergrande’s debt adds to signs that Beijing is reluctant to orchestrate a government rescue, even as the property giant’s crisis spreads to other developers and sours sentiment in the real estate market.”

Our read is slightly different: Beijing will still have to orchestrate a government rescue because while Yan’s fortune has shrank to “just” $7.8 billion from its 2017 peak of $42 billion, that would be a tiny fraction of the $300+ billion in debt and other liabilities the company owes. As such, Beijing’s demand is merely a warning to other oligarchs: if your company became over indebted and is suddenly no longer viable, your own fortune will be at risk.

Bloomberg’s notes as much, saying that it was unclear whether Hui’s fortune is big and liquid enough to make a sizable dent in Evergrande’s liabilities, which swelled to more than $300 billion as of June. The developer’s dollar bonds are trading at deep discounts to par value as investors brace for what could be one of China’s largest-ever debt restructurings.

To be sure, Beijing won’t have much trouble bringing its case to the people, especially those people who lost their life savings on Evergrande Wealth Management Products: Hui’s fortune is derived from his controlling stake in Evergrande and the cash dividends he’s received from the company since its 2009 listing in Hong Kong. Hui has pocketed about $8 billion over the past decade thanks to Evergrande’s generous payouts, according to Bloomberg calculations. So, flipping Beijing’s new paradigm of “shared prosperity” on its head to “shared misery”, it only makes sense for Yan to lose everything as his company slowly goes under.

While Evergrande surprised some China watchers by pulling back from the brink of default, paying a $83.5 million coupon to international bondholders before the grace period expired Oct. 23, the next big test will come as soon as this Friday when the 30-day grace period on another dollar coupon payment comes due. A hefty wall of maturing debt awaits in 2022, with some $7.4 billion of onshore and offshore bonds coming due.

It wasn’t clear where Evergrande’s debt repayment funds came from. Separately, Reuters reported that Hui agreed to put his own money into a Chinese residential project tied to a bond to ensure it’s completed and bondholders get paid.

Unfortunately for Evergrande’s lenders, even if the billionaire backstops the debt with his personal funds, it won’t make much of a difference. The property giant’s operations have effectively frozen, as sales collapsed 97% in the most recent period, while there has been very little help from asset sales in recent months even after Hui put stakes in once-prized arms such as his electric vehicle and bottled water units on the block. Evergrande said last Wednesday it scrapped talks to offload a stake in its property-management arm. The deal fell apart even after officials in Evergrande’s home province of Guangdong helped broker the talks.

If Yan ultimately goes along with Beijing’s directive he has nobody to blame but himself… and Xi Jinping of course: Evergrande and its affiliated companies were built through an aggressive mix of debt issuance, share sales, bank loans and shadow financing – funding avenues that have been largely cut off under Beijing’s recent debt crackdown.

As Bloomberg notes, the Ministry of Housing and Urban-Rural Development instructed local subsidiaries across China in August to supervise funds for Evergrande’s property projects in special escrow accounts, people familiar said. Under the heightened oversight, the developer’s funds must first be used for construction to ensure project delivery. Evergrande has yet to finish homes for 1.6 million buyers who have already put down deposits. Its real estate sales plunged about 97% during peak home-buying season, further crimping its ability to generate funds.

Ultimately, Yan may be lucky if he can get away from his troubles by just parting with all his money: his firm’s troubles are infecting the broader housing market, and the outcome could spark widespread popular anger which Beijing will be quick to redirect at the likes of Yan.

For now this dire outcome seems unlikely: China’s banking regulator last week vowed to keep its curbs on the nation’s property market, even though the policies have weighed on indebted developers. While officials have told banks to speed up mortgage lending again, the central bank has indicated that contagion risks from Evergrande are “controllable” and unlikely to spread. Then again, that’s what regulators said about Lehman too…