Firefighter Josh Sattley contracted the SARS-COV-2 virus at work, and developed COVID-19 along with his wife and kids in January 2021. He fully recovered and returned to work quickly due to his excellent health at Beverly Hills Fire Station 1. He never thought he would face a faith challenge while working as a firefighter, but the COVID-19 vaccination crush has put his faith front and center.

An article published in the Beverly Hills Courier touts a 78% vaccination rate among Beverly Hills city employees in an anonymous and voluntary survey in August 2021. Rumblings of COVID-19 shot mandates started in early September 2021 in the BHFD, but the pressure didn’t increase until after the Newsom Recall was over.

The stage was set. In lockstep, fire department management pressed firefighters to get the COVID-19 shot, or request an exemption. When exemption requests flowed in from the Beverly Hills Firefighter Association the 25 requesters were told they were required to use a BHFD exemption form, and to expect an interview to determine their “sincerely held religious belief” The interview was with legal counsel supplied by the Beverly Hills Firefighter Association. Management had no list of questions, and no criteria they would reveal to Josh or the Association legal counsel during what Firefighter Sattley came to realize was an interrogation.

Four firefighters were granted temporary medical exemptions with a review in 30 days. One full medical exemption was granted. Of 20 religious exemptions, 14 were granted a 30 Day Exemption with another interview at the end of the 30 day period. 6 religious exemptions were denied. Of those 6 firefighters, 5 couldn’t take the pressure exerted by BHFD management, and took a COVID-19 shot to avoid further department action against them. Firefighter Paramedic Josh Sattley was the sole crew member who would not take the shot, and on Friday, October 1, 2021 he was notified via email he was disciplined with Leave without Pay until further notice.

The Free Exercise Clause of the First Amendment of our Constitution forbids any restriction of religious practice. The Freedom Forum Institute writes that SCOTUS has not ruled on a case concerning inoculation mandates since 1905, in a case involving smallpox.

The ruling hinged on the compelling reasons the State had to require all individuals be vaccinated. As an Emergency Use Authorization medication, other medical treatments that could mediate or buffer serious consequences of a SARS-COV-2 infection have been banned from use by the US government. A mandated COVID-19 shot does not appear to meet the standard of compelling evidence.

Younger subjects of robust health or with a history that demonstrates immunity from SARS-COV-2 are examples that would challenge a “compelling evidence” argument. Recently the FDA Advisory Board would not grant Pfizer sweeping authority to administer a booster COVID-19 shot to the entire Pfizer dosed population.  The reason: Insufficient data to demonstrate a booster was needed in all age groups, and real data the shot was causing harm to the hearts of some younger males.

In the run up to Firefighter Sattley’s current impasse with his employer, Beverly Hills Fire Department never tracked current SARS-COV-2 infections with mandatory employee PCR testing since the pandemic was declared in early 2020. In addition, BHFD crew members afflicted with the COVID-19 disease had no organizational guidelines to trace crew members immunity after contracting COVID-19. PCR tracking, which could identify hotspots of the virus in crews that answer calls for the BHFD service area, was never implemented.

Five US Senators have authored the Prevent Unconstitutional Vaccine Mandates for Interstate Commerce Act the last week of September 2021 to compel all agencies to review viral immunity of many Americans who should not be required to risk the use of an EUA medication. 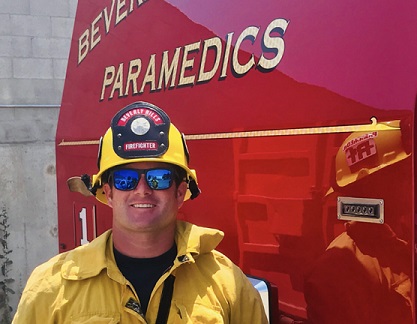 For now, Firefighter Josh Sattley has been denied due process because his Constitutionally protected religious convictions have directed him to refrain from taking a COVID-19 shot. Due process is a function of the agreement between the City of Beverly Hills and the Beverly Hills Firefighters Association. In addition, the city has denied Firefighter Sattley his Skelly Rights which allow any State employee to remain on paid status to review any disciplinary actions and provide ways to mediate or remedy the concerns of the State of California before disciplinary action can be administered.

We should all be concerned about this trampling of Constitutional Rights, and spread the word to support Firefighter Sattley and others like him.

Chris Bailey is a reporter-at-large of citizensjournal.us, a business owner, military veteran and longtime resident of California