Biden Convicts Border Patrol Agents. What Will Be The Punishment?

In a macabre portrayal of reality reminiscent of Baghdad Bob’s statements during Desert Storm, the President of the United States, the Vice President, DHS Secretary Alejandro Mayorkas and Democrat Congressperson Maxine Waters all spread similar themes of “Border Patrol agents are racists” 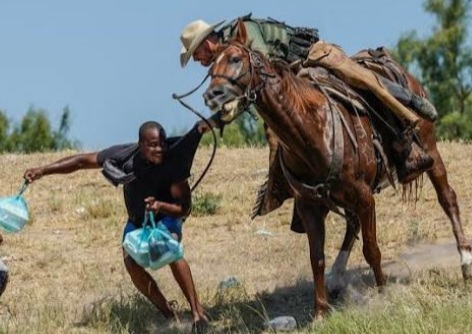 President Joe Biden “It’s outrageous. I promise you those people will pay. They will be investigated. There will be consequences,” He vowed on Friday to take action against border patrol agents on horseback whose actions in Del Rio, Texas drew widespread outrage.

Vice President Kamala Harris “Well, first of all I’ve been very clear about the images that you and I both saw of those law enforcement officials on horses. I..I..I was outraged by it. I..It was horrible and um.. and deeply troubling. There has been, now an investigation that is being conducted which I fully support and there needs to be consequence and accountability. Human beings should not be treated that way, and as we all know it invoked images of some of the worst moments of our history where that kind of behavior has been used against(chuckling) the indigenous people of our Country, has been used against African Americans during (southern accent) times of slavery and um..I’m glad to know that  Ally Mayorkas the Secretary of the Department of Homeland Security is taking it very seriously” Transcript of The View, Friday September 24, 2021

DHS Secretary Alejandro Mayorkas “I was horrified by what I saw. I am going to let the investigation run its course, but the pictures I observed troubled me profoundly. One cannot weaponize a horse to aggressively attack a child. That is unacceptable, that is not what our policies and our training require. Please understand, let me be quite clear, that is not acceptable. We will not tolerate mistreatment. And we will address it with full force based on the facts that we learn.” CNN Live 24 September 2021

Congressperson Maxine Waters “I’m pissed. I’m unhappy, and I’m not just unhappy with the cowboys who were running down Haitians and using their reins to whip them. I am unhappy with the Administration, we are following the Trump policy. He is the one who does not follow the Constitution and would not allow those seeking refuge to be able to petition and get into this Country. What the hell are we doing here? What we witnessed takes us back hundreds of years. What we witnessed was worse than slavery. Cowboys with their reins, again whipping Black people, Haitians into the water where they are scrambling and falling down…who’s paying these cowboys to do this work? They have got to be gotten rid of. They have gotten to be stopped. It cannot go on…They are trying to take us BACK to slavery days, and worse than that.” Transcript, Forbes NewsService 24 September 2021

Now, the truth as told by the photographer.

Photographer Paul Ratje “Some of the Haitian men started running, trying to get around the horses. I never seen them whip anyone. He was swinging it, but it can be misconstrued when you are looking at the picture.” KTSM Channel 9 El Paso Texas 24 September 2021

Paul Ratje is the photographer who took the pictures that have been seen all over the world as evidence of Border Patrol personnel whipping Haitians who were illegally crossing into Texas from Mexico. The photographs were taken from the Mexican side of the border. He clearly stated there was no whipping occurring at the border.

I intentionally waited two days to write an article, to see if any media on the Left would retract or update any of their feeds, or request new statements from officials to clarify reality. Do they feel they should have a different view, a different perspective on what happened in Del Rio, Texas?

Nope. Not a peep from most media sources. The sources most of the Democrat base watch and listen to without any concern for being gaslighted every day by their chosen news source. Our children can search on their school computers and learn a false narrative along with their parents, so they can be blissfully gas-lit at home and school. 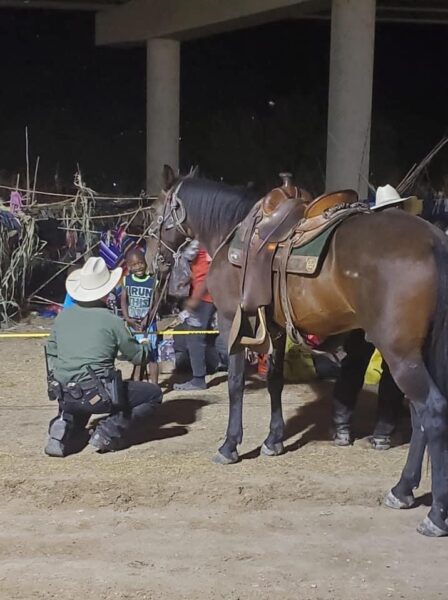 Some of the pictures taken during that time were never published by the main stream media because they didn’t fit the administrations narrative. This photograph depicts a border patrol agent approaching a Haitian child off his horse. The lack of racism and aggression in this photo made it easy to exclude from the public view.

President Biden had some pretty strong words for those who committed this egregious act at the border. “I promise you those people will pay!” Maybe a drone strike, or a SEAL team interdiction can be organized against the Border Patrol offices? Can we expect police departments from coast to coast to end their mounted police programs? After all, the Secretary of Homeland Security was SHOCKED at the use of horses at the border. 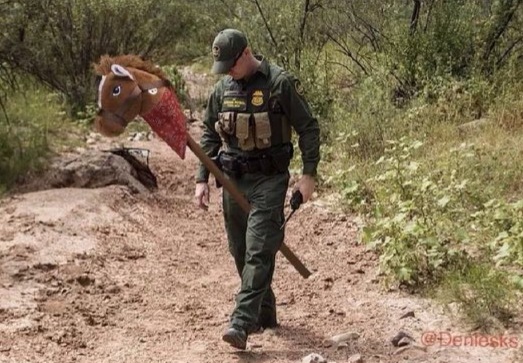 Senator Ted Cruz had a whimsical view of what should be a viable solution to the use of horses at the border. Our government is treating us as we have the minds of children, so it seems painfully appropriate.