In spite of the national pandemic, Biden signed an executive order to terminate the Trump administration’s border health protections — known as Title 42.  Under Biden’s new order, unscreened illegal border crossers are now allowed to remain in the United States even though Biden claims to be taking action to rigorously screen other travelers, such as airline passengers.

Republican Congresswoman Yvette Herrell’s (NM-2) legislation,  Protecting Americans from Unnecessary Spread upon Entry (PAUSE) Act of 2021 calls for illegal border crossers to be removed from the United States. The legislation, which prevents the introduction of new COVID-19 cases from our land and sea borders with Canada and Mexico, is the congresswoman’s first bill.

On Tuesday, citizen lobbyists who are members of We The People Rising, America First Latinos, The Remembrance Project, and  Concerned Citizens met with the staff of Republican Congressman Jay Obernolte (CA-8)  in support of the PAUSE Act, calling upon the congressman to co-sponsor the legislation. 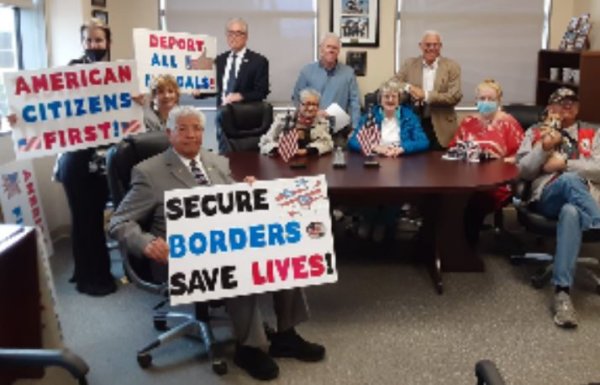 “Congresswoman Herrell’s PAUSE Act would end Biden’s dangerous, open border executive order,” Robin Hvidston, Executive Director of We The People Rising and CA State Coordinator of The Remembrance Project, said. “Our citizen lobby group is advocating that members of congress co-sponsor and support this common sense legislation.  Since Biden’s executive order was signed, according to the border patrol, thousands of illegal border crossers are being released into the United States without  COVID-19 testing or other restrictions.  This is a disastrous policy that will have serious public health consequences.”

“Our organization and citizen lobbyists are calling upon members of congress to support the PAUSE Act, in the name of public health and safety,” Hvidston said. “Congress must act to counteract the dangerous Biden open border executive orders.”

WE THE PEOPLE CALIFORNIAS CRUSADER

WE THE PEOPLE CALIFORNIAS CRUSADER