SACRAMENTO, CA — On January 18, 2021, Deputy Adam Gibson succumbed to his injuries from gunshots while trying to apprehend a suspect in a vehicle.

At about 10:07pm, Sacramento County Sheriff’s Office Deputies saw an occupied vehicle that matched the description of a vehicle involved in a series of burglary incidents. The suspect, who was identified as being on active parole, became uncooperative and fled in his vehicle. After a short pursuit, the suspect disabled his vehicle after striking a curb. 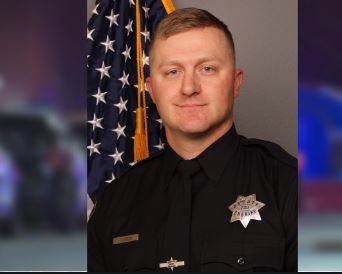 Multiple patrol units were at the scene. Deputies instructed the suspect to exit the vehicle. After refusal, deputies proceeded to deploy less-lethal bean bag rounds at the suspect’s back window to look inside. A K-9 was then sent through the back window.

Multiple shots were fired from inside the vehicle. Two deputies and the K-9 were struck by the suspect’s gunfire. Multiple deputies returned fire. The suspect was pronounced deceased at the scene.

The wounded officers were transported to the hospital where Deputy Gibson tragically died from his injuries. He was 31 years old.

Deputy Gibson was a 6-year veteran of the department. He was also a veteran of the United States Marine Corps, completing two tours in Afghanistan. Deputy Gibson received the Sheriff’s Office Bronze Star for Bravery and a Major Incident Ribbon in 2018.

Deputy Gibson is survived by his wife, Rachel Gibson, his 9-month-old child, his parents Doug and Sandee Gibson, and several siblings.

“We are heartbroken at the tragic loss of a true hero. He will be greatly missed,” said Brad Houle, CAHP Credit Union President. “Deputy Gibson was a hero as an officer and as a soldier. He was a cherished husband, father, and friend. We grieve together with his family during this sorrowful time.”

Please keep Deputy Gibson’s family, friends, and colleagues in your thoughts and prayers as we mourn this heartbreaking loss.

Donations can be made on the CAHP Credit Union website https://cahpcu.org/DeputyAdamGibsonMemorialFund or mailed to:

CAHP Credit Union has a membership of over 20,000 and is dedicated to matching the integrity, judgement and courtesy displayed by our peace officer members every day, in providing financial services whenever and wherever they need access to CAHP Credit Union.

My prayers and condolences are with his family.