California: A Nightmare of Over Regulation

The State of California is choking its residents with excessive regulations.

Do you owe the state any tax money?  Don’t send in a check.  The state wants electronic payments.  The state’s collection agency for taxes, the Franchise Tax Board of California, will apply a penalty to anyone who pays a tax bill by check.  For example, if one owes $20,000 in California taxes and pays by check, the taxpayer will get a one percent penalty ($200).  The penalty must be paid electronically.

In just about any business, the seller would be grateful to accept payment by check, credit card, debit card, or cash.  But the Franchise Tax Board is not willing to be friendly to customers.  The taxpayer, who may not have access to a computer, must make payments California’s way.  This regulation is the byproduct of the tyranny of a monopoly — a government monopoly.

Try ordering a live plant from an out-of-state firm (like www.Amazon.com).  In all likelihood, the prospective buyer will be sent an e-mail letter stating that California regulations prevent the shipment of live plants from outside of California into the Golden State.

Do you want a bag to carry groceries home?  Most supermarkets want the customer to pay for a paper or plastic bag.  In 2016, California’s voters approved Proposition 67, which bans the use single-use carryout bags.

In a restaurant, if a customer wants a straw with a beverage, he has to ask for the straw.  Some restaurants refuse to provide straws.  In 2019, California banned the use of plastic straws in dine-in restaurants unless the customer requests a plastic straw.

The state want to usurp local control over zoning.  For several years, the California State Legislature has tried to pass bills that prevent local communities from setting building heights and housing density (houses per acre).  Why can’t the local community let its citizens decide matters of zoning?

A new law (Assembly Bill 5) prevents certain workers from being independent contactors.  The law affects independent truckers, freelance journalists, and freelance photographers.  Individuals in these lines of work must be employees, meaning that their wages are affected by mandatory deductions for the federal income tax, the state income tax, Social Security, Medicare, and other government-mandated programs.

Another new law requires all Californians to have health insurance.

There is nothing wrong with riding a bicycle, but the state has started to impose regulations that affect both motor vehicles and bicycles.  California law says that people who ride bicycles must ride as close to the right side of the road as possible.

In some communities, if there is bicycle lane, it can be on the right edge of the pavement, leaving no room for both motor vehicles and bicycles.  Sometime, especially on hilly and curved roads, a bicycle rider can tie up motor vehicle traffic for long periods of time.

Perhaps the plethora of regulations — as well as the state’s high rate of taxation — is forcing California residents to move elsewhere.  Already, there are indications that the state will lose one congressional district after the 2020 census is taken.

Currently, California has 53 congresspersons in the House of Representatives.  After the 2020 census, that number may fall to 52.  This would be the first time since California became a state that it has lost congressional representation.

When California became a state in 1850, there were only two House members.

The moral of the story is this:  Keep on regulating, and California may go back to having only two congressional representatives. 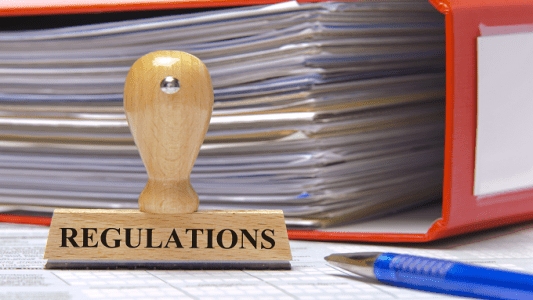 The only hope we have is that politicians like Donald Trump will be elected in California politics.

We experienced the shock of ‘paying by check’ when paying the State LLC fees by check – to have a receipt, only to then receive a bill for using a check! Of course there was no delay in the State cashing our check, and we had to still go register and pay on-line the penalty. I imagine the penalty cycle would continue to repeat if you didn’t pay on-line!